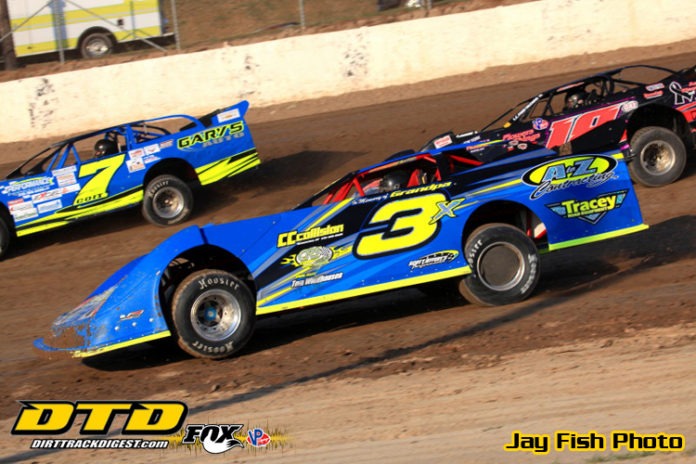 PULASKI, PA – The Sweeney Chevrolet Buick GMC RUSH Racing Series is spreading its wings with sanctioned tracks now in New York, Pennsylvania, Ohio, Maryland, Delaware, Virginia, and Ontario, Canada. In all, there are 25 facilities hosting RUSH-sanctioned events in 2017. The 3/8-mile Fulton Speedway located in Fulton, New York is one of those along with Brewerton Speedway, as the two speedways share ownership by John Wight.

Fulton was built as an asphalt track in 1960 by Millard and Raymond Benway and was opened in June of 1961 under the name of Mil-Ray Raceway. The track name was eventually changed to Fulton Speedway in the mid ’60s. The track operated as a pavement facility until 1978 before reopening in 1979 as a clay oval. There was a 1/8-mile dragstrip at the facility that operated from 1962 through 1972 and a small dirt oval that was used for Slingshots in 2000.

Fulton and Brewerton Speedways General Manager Cory Reed said, “The tracks are a half hour apart. Theoretically, it’s two different owners, but in principal it’s the same person who runs them. The same staff manages both tracks. It’s different companies who own them, but they’re sister tracks.” While Fulton will run a full RUSH Late Model Weekly Series schedule beginning April 29, Brewerton will host a pair of RUSH Late Model events on June 23 and August 4 during the 2017 season. Each of the past two years, Brewerton has had one event with Kevan Cook winning both years.


After seeing a regional drop in Late Model racing in upstate New York, the Late Models were dropped in 1987 from the divisions at Fulton Speedway. In 1998, Benway sold the tracks to Harvey Fink. Eight years later, Fink sold the tracks to a group of investors, who wanted to turn them into investment properties.

That’s when John and wife Laura Wight stepped in and bought both tracks on March 19, 2009. One of his first moves was to bring in the Crate Late Models to both tracks. By 2015, Fulton Speedway was a RUSH-sanctioned track. Initially, the growth of the Late Models was somewhat slow, but track officials stuck with the class deciding to run them only at Fulton Speedway and not at Brewerton.

Besides being a track owner, Wight is also a successful businessman as the owner of Gypsum Express, Ltd., a trucking business that began in 1976 with one pickup truck and a borrowed trailer. Today, he has better than 650 tractors with 14 terminals located in 10 states and has over 750 employees.

Before purchasing the two tracks, Wight had been the owner of Can Am Speedway. “When I walked away from Can Am, I thought I would never own a racetrack again,” said Wight. “I just wanted a place to race and enjoy racing. Fans enjoy going to Brewerton and Fulton every Friday and Saturday night.”

“I have no regrets buying the tracks,” said Wight. “It’s a lot better than what I expected. I think it’s (RUSH) a good series with the driver payoffs. The sanctioning body is what I really like.” One area that Wight would like to see changed is that all drivers need to be licensed.

The growth of the Crate Late Models at Fulton has been very encouraging. In 2016, 34 drivers attempted to qualify for a track points paying show at Fulton. A total of 17 events were completed with seven different winners. The Late Model champion at the track last season was 27-year old Chris Fleming of Auburn, NY. Fleming, who has only been racing for nine seasons, won $1700, in driver championship monies and contingencies from RUSH.

“It’s my favorite track I’ve ever raced on,” said Fleming of Fulton Speedway. “It’s very versatile with high banks. Anyone that goes there loves it because you move around with multiple grooves. It tends to get slippery so it’s not a hammer down type of track, but a finesse track.”

The track championship was Fleming’s second in a row. That’s pretty good for a driver who has only been racing Late Models for two years. His other seven years were spent in an IMCA Modified. When he’s not racing, Fleming is a welder and fabricator at Beyea Custom Headers where he does race exhausts for Late Models, Big Blocks, and Micro Sprints.

As for the RUSH Series, Fleming said that it’s on the upside. “We’re continuing to get more cars each year and better competition. It’s run very well and there are a lot of marketing partners.”

In all, Fleming will run around 40 races for 2017. “If we would run two nights a week, it would be higher than that,” he said. “We’re committed this year to Saturday nights and some special shows.”

Cato, NY’s, Brandon Ford, who finished fourth last year in points likes Fulton Speedway. “I just like the style of racing,” said Ford. “I like the track surface because it’s wide and it’s slick at the end of the night.” Brandon’s been racing at Fulton for the last six years with the last four in a Crate Late Model. “I like the guys I race against. Everyone seems to get along real well and that’s good for Saturdays where everything is not so cut-throat.”

As for RUSH’s involvement with the track series, Ford said, “I think it’s good. There are a lot of incentives to join with the insurance and other programs.” He also found that the RUSH Series payouts are better than those he receives from the track. “I like the way they run the series.”

Ford’s plans for 2017 are to run full-time at Fulton and take in a couple of the RUSH travelling shows as well.

Chad Homan raced a Modified for 10 years, but found the costs were getting out of hand. “It was getting too expensive, but I’m happy with what we were able to do with the budget we had,” said Homan, who lives in Penfield, NY. With that in mind, he bought a Late Model last year and sold his Modified. “The initial hit was costly, but not nearly as much as the Modified,” said the 34-year-old Homan. “We actually brought in $4,000 more last year running the Crate than we did with the Modified.”

Homan ran a handful of non-sanctioned races at Canandaigua last year but said the car counts were too low with only about four or five drivers competing. “They didn’t do what they needed to do to get it off the ground,” said Homan. So this year it will be Fulton Speedway. “I’ve run there a few times and I really enjoy the track. It’s wide and racy from top to bottom. You can get to the front each and every night. I’ve always ran decent when I’ve raced there so I’m pretty confident we’ll be running pretty well.”

“I think it’s great,” said Homan of the RUSH banner being flown at a number of racetracks. Those tracks that he plans to race in 2017 will be Fulton on Saturdays and Humberstone on Sundays. “I think the weekly program is awesome. Coming from the Modified world where the promotions aren’t where they need to be, the RUSH Series really has their stuff together. They make the little things better for the driver, particularly with the bonuses they offer. They are getting the RUSH banner spread around in New York, Pennsylvania, and Ohio. I’m really looking forward to a good year this season. My goal is to get up as high as we can in the RUSH Weekly Series.”

Fulton GM Cory Reed said, “The RUSH program has provided stability for us. They have a set of rules that are the rules we follow. We’re expecting a larger amount of licensed drivers this year because of the awards that are available.”

John Wight’s son, Larry, races Big Block Modifieds, “360” and “410” Sprint Cars, and occasionally a Late Model. The 24-year-old has collected 88 feature wins in his #99L big-block and was Fulton Speedway champion this past season. He also finished second in the Big-Block Modified division at Brewerton, and was also in contention as the runner-up at Utica-Rome Speedway. In addition to his track championship of last season, Wight is also a two-time Late Model champion at Fulton.

“It’s one of my favorite tracks,” said Larry of Fulton Speedway. “Three weeks in a row, I started 18th and won in three consecutive weeks. If you have a good car, you can make your way up to the front. In the season ending Outlaw 200, a 200 lap Modified race, Wight finished 2nd and 3rd in 2015 and 2016.