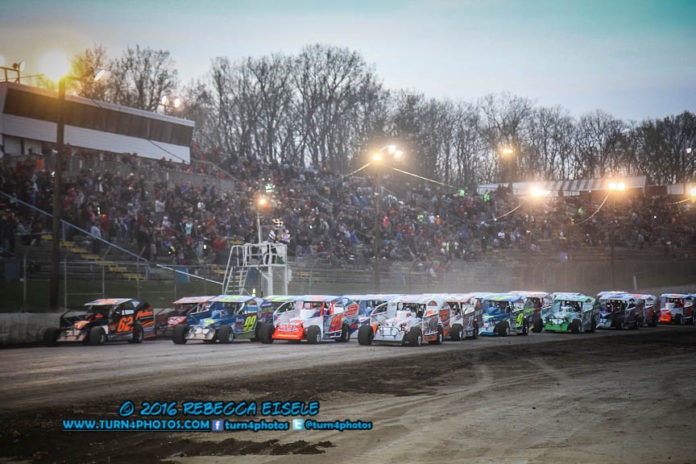 BALDWINSVILLE, NY – ACalendars have been circled for months by both fans and race teams ready to kick off the 2017 Modified Super DIRTcar Series in the Northeast. Saturday, April 29 the Fulton Speedway will host the stars in their 800 horsepower, ground pounding, Big Block Modifieds as they will do battle in the “Highbank Holdup” 100. Also on the race card will be the first track point race for the SUNY Canton DIRTcar Sportsman and Billy Whittaker Cars & Trux RUSH Late Models.

The 2016 “Highbank Holdup” 100 took 5 heats and 2 Last Chance Showdowns to set the starting field in front of a large crowd.


In the 100 lap slugfest two and three-wide racing was found throughout the field that came down to a race between Billy Decker and Tim Fuller. In a back-and-forth battle in and out of lapped traffic, Decker made the winning pass on lap 83 when Fuller got caught up behind lap cars. Jimmy Phelps, Billy Dunn and Stewart Friesen finished third through fifth.

Ron Davis III will be locked and loaded and ready to defend his 2016 SUNY Canton DIRTcar Sportsman track championship. Winning a feature or track championship on the Fulton “Highbanks” is no easy task. In 2016 84 drivers attempted to qualify for a points paying race.

When Chris Fleming won the 2015 Billy Whittaker Cars & Trux RUSH Late Model track championship in his rookie season many wondered if there would be the “Sophomore Jinx”. Fleming proved there was no such jinx as he won his second straight championship as he looks for the hat-trick in 2017.

In just a few seasons the Late Model division has gone from a new division at the Fulton Speedway to some of the best racing you will see on a weekly basis. In 2016 34 cars came through the pit gate in an attempt to qualify in a points paying race.

For camping & grandstand policies go to www.fultonspeedway.com and click on the “Highbank Holdup” logo on the front page.