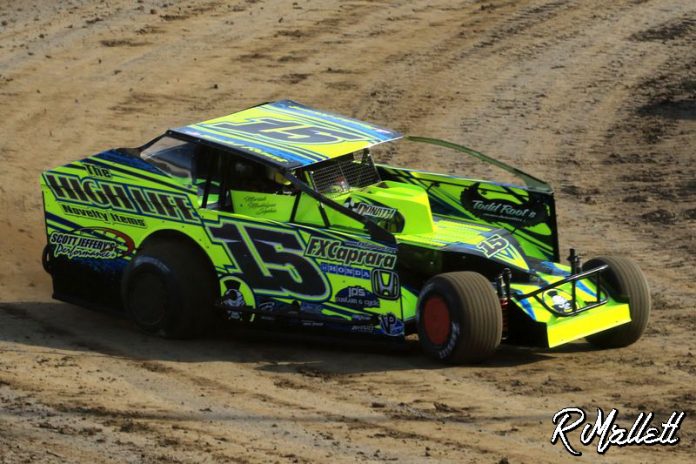 FULTON, NY – Todd Root of Warners, N.Y., snatched his first high dollar win of the season in the opening round of the DIRTcar Sportsman Championship Series at Fulton Speedway. Root bested a field of nearly 50 Sportsman competitors to defend home turf from a number of invaders from all around the northeast and Canada.

31 drivers took the feature event green flag on Friday night, led by Mike Phelps and Tyler Trump. Phelps took command off the initial start, opening up a comfortable lead before a caution with 7 laps completed for Martin Pelletier and Greg Martin. After the restart, the battle for the lead intensified greatly, with the drivers of Phelps, Trump, and Todd Root all running within feet of each other. On lap 15, the trio of frontrunners ran three wide for the top step of the podium, with Root edging out Phelps for the lead. One lap later, Trump, Phelps, and Brad Rouse crossed the line three abreast for second, with Trump taking the position, followed by Rouse and Phelps, who surrendered the lead just over a lap before.

Halfway through the feature, Todd Root was working on building his lead over Trump, Rouse, Jeremy Dygert, and Phelps. Brad Rouse’s strong run came to an abrupt end on lap 21, as he slowed and pulled off the racing surface on lap 21, moving Dave Marcuccilli into the top five. A spinning Charlie Tibbitts brought out the caution once again 26 laps in, erasing Root’s half-straightaway lead over Trump, Dygert, and Marcuccilli, now with Shane Pecore slotting into fifth.

On the ensuing restart, Dave Marcuccilli was able to slip around the Jeremy Dygert machine and into third. Pecore nosed ahead for fourth in front of Dygert momentarily, but within a lap surrendered the spot and returned to fifth. Meanwhile, at the front of the field, Todd Root continued to turn consistent laps in the middle groove of the slick track, slowly increasing the gap between him and Tyler Trump. While Trump was able to keep Root close in sight during the final laps, he was unable to close on the Root #15.
Todd Root crossed the finish line first, around a second in front of Tyler Trump, Dave Marcuccilli, Jeremy Dygert, and Shane Pecore.

“We just had to search for the right line,” said Root in victory lane. “I just didn’t really know where the line was going to be. I figured the track was going to go away pretty good, but once I started to find my marks, the car was really good. This is what I was looking for, a good strong run right out of the gate.” 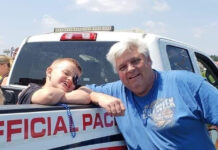