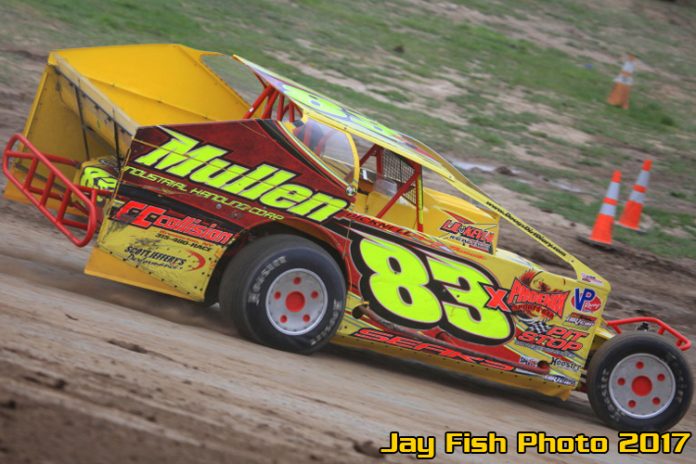 FULTON, NY – Tim Sears Jr took the checkers in a hard fought battle in the 35-lap Modified feature event at the Fulton Speedway. Sears topped a stout field of 30 Modifieds in the first points paying race of the season.

Billy Whittaker and Chad Phelps led the field to the green flag with Phelps riding the large berm on the heavy track to lead the opening circuits. Larry Wight, winner the previous evening at the Brewerton Speedway, quickly worked under Whittaker to claim second. Wight’s first stint as runner-up was short lived, as he drove past Phelps for the lead on lap three and began building a lead over the rest of the field.


The first yellow of the race flew on lap 20, as Max McLaughlin and Justin Haers made contact, sending McLaughlin spinning. Wight chose to restart on the bottom of the racing surface, relegating Sears to the top. However, the top was right where Sears wanted to be, as he drove around Wight to lead lap 21. The field slowed once more, this time on lap 26 for Ryan Jordan’s mechanical issues.

In between the two cautions on laps 21 and 26, Sears was able to open up a small gap between himself and Wight. However, Sears was unable to do the same on the second and final restart on lap 26, as Wight was glued to the back bumper of his machine. Over the final nine laps, Wight remained close, often within a car length of Sears, but was unable to make the pass. Ultimately, Tim Sears Jr crossed the line ahead of Wight, Whittaker, Jimmy Phelps, and Haers for his first win of the season.

“This is awesome,” an excited Sears said in Victory Lane. “We had tough luck last night, and to turn around and run this good tonight, it means a lot. We had to put a whole new front end in this car today, and straighten out all the bent pieces from last night, but we got it ready.”

A total of 41 SUNY Canton Sportsman drivers signed in at Fulton Speedway on Saturday night, which meant two 25-lap features were on the card for the evening, both paying full purse and full points.

Michael Stanton took hold of the lead on the opening circuit of the first Sportsman feature, but quickly gave way to Nate Higgins as he drove around the outside of Stanton to grab the top spot on lap two. Ronnie Davis III started in fifth, but spent little time at the back of the top five. The defending Fulton champion snatched second entering turn one on lap four, and found himself leading by the time the field reached turn three.

Chris Mackey was not far behind Davis, as he reached second by lap eight and immediately began to chip into Davis’ lead. On lap 11, Higgins’ solid run came to an end after a spin in turn two. On the restart, Davis was unable to pull away from Mackey, as the two ran side by side for a number of laps. Mackey even took the lead briefly, being scored the leader on lap 16. However, Davis took the top spot back, and the battle slowed with just four laps remaining for Bill Megnin’s damaged machine.

As the field fired once again on lap 21 of 25, Glenn Forward rode the far top of the speedway to first grab third from Bill Clark, then second from Mackey. But, Ronnie Davis III was too far out front for Forward to catch, as he cruised to his first Fulton win of the year over Forward, Mackey, Jeremy Dygert, and Clark.

Tyler Thompson jumped out front as the second 25-lap affair took the green, but Nick Krause grabbed the lead away from Thompson after just two laps. An early caution on lap three for a spinning Willy Decker Jr forced a restart, where Thompson’s run came to an abrupt end. Thompson’s car shut off exiting turn 2 in front of the entire field, causing multiple drivers to take evasive action to narrowly avoid the disabled car. The field once again lined up, and Krause resumed leading.

Dave Marcuccilli started in 11th, but reached the runner up spot by lap 16. Marcuccilli was a full straightaway behind Krause, but not for long, as Darren Smith lost a right rear tire with five laps remaining. On the restart, Marcuccilli blasted by Krause and cruised to the victory in the second feature of the evening ahead of Todd Root, Alan Fink, Jeremy Pitcher, while Nick Krause slipped to the back of the top 5.

Jason Parkhurst took advantage of his front row starting spot to dominate the caution free Billy Whittaker Cars & Trux Late Model feature event. Parkhurst’s win over Kevan Cook was his first at the track under RUSH sanctioning, and could not recall himself the exact year of his last Late Model win.

After losing the motor of his primary ride in his heat race, Chris Bonoffski drove his backup ride to victory in the JB Logging & Firewood 4-Cylinder feature.

Remington Hamm scored the victory in the first E&V Energy Novice Sportsman feature in just his second time behind the wheel of the car. AJ Miller took the checkered in the second feature, as 21 total cars required the fields to be split. 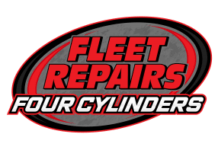