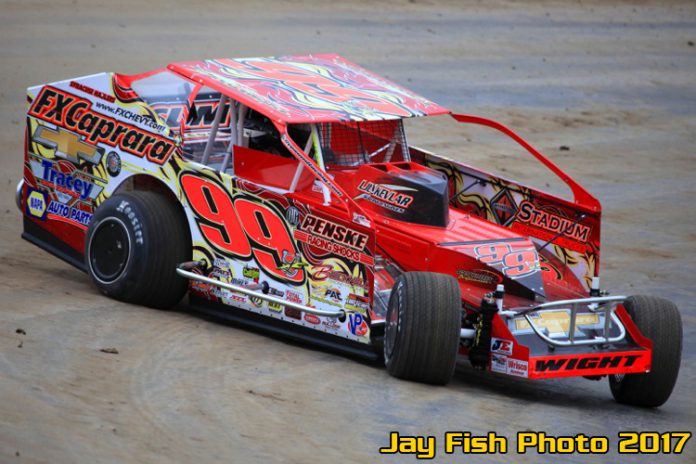 FULTON, NY – For the second time this weekend, Larry Wight visited victory lane in the Modified division. On this occasion, the location was Fulton Speedway, where Wight hung on for his first win of the year at the track.

Tim Mayne and Tim Kerr led the field to the start of the 35-lap feature, with Mayne taking hold of the lead before an opening lap caution for Jim Witko’s disabled vehicle. On the restart, Kerr jumped out front, riding the far outside of the surface to grab the top spot away from Mayne. All eyes quickly shifted further back, as Chris Hile worked from his seventh starting spot to second by lap 6, only to surrender the runner up spot to 17th place starter Larry Wight just one lap later.

Wight’s charge to the front took little time, as he worked under Kerr to take the lead away after just 10 laps. A caution just two circuits later on lap 12 for a spinning Kody Graham prevented Wight from running away from the field for the time being.
In the few laps following the restart, Jimmy Phelps climbed up to third and set his crosshairs on Kerr’s machine for second. Phelps’ first slide job on lap 18 proved unsuccessful, but his second slider worked well, as he finally wrestled second away from Kerr on lap 22. By this point, Wight had assembled a large lead spanning the length of a straightaway, but Phelps began chipping away. By five to go, Phelps reeled in Wight to within a car length, but was unable to complete the pass. At the end, Larry Wight grabbed his first Fulton win of the year, and fourth overall, narrowly over Jimmy Phelps,

Pat Ward, Tim Sears Jr., and Tim Kerr. Sears’ drive into the top five took place behind the wheel of Larry Wight’s backup car, as Sears’ primary ride was destroyed the previous night battling for the win at Brewerton Speedway.


“This whole team has worked so hard on this car,” Wight commented. “Scott Jeffrey has this thing going about as fast as it can possibly go. It’s like driving a Cadillac.”

Late Model feature action saw Eric Kingsley sprint away from the field early in the 20-lap feature. On a restart at halfway, defending track champion Chris Fleming took command, driving around the outside of Kingsley to snatch away the lead. Fleming appeared to be cruising towards another win at the track, but another yellow on lap 16 bunched the field together once more. On the restart, Kingsley made one last effort on the bottom, briefly taking the lead away and being scored the leader on lap 17, but Fleming quickly regained his advantage to lead the final circuits and grab his first win of the year.

Sportsman action saw Ronnie Davis III return to victory lane, as he charged through the pack from 13th to grab the lead away from Brett Draper before halfway. Davis took advantage of early yellows on laps 2, 4, and 6 to advance through the field quickly, reaching third after just 6 laps. While Davis took command and dominated the remainder of the event, action slightly further back was intense. Over the second half of the feature, Tyler Thompson, Brett Draper, Jeremy Pitcher, Glenn Forward, and Corey Barker engaged in an epic duel for the runner up position. Ultimately, Ronnie Davis III cruised to another Sportsman win, while Corey Barker, who won the first consolation event on the evening, charged from fourth to second on the last lap. Completing the top five were Pitcher, Draper, and Forward.

4-Cylinder action saw Chris Bonoffski hold off the late challenges of both Ray and Dakota Bechler for the hard earned win, while Jimmy Moyer and Kyle Perry split the Novice Sportsman features.