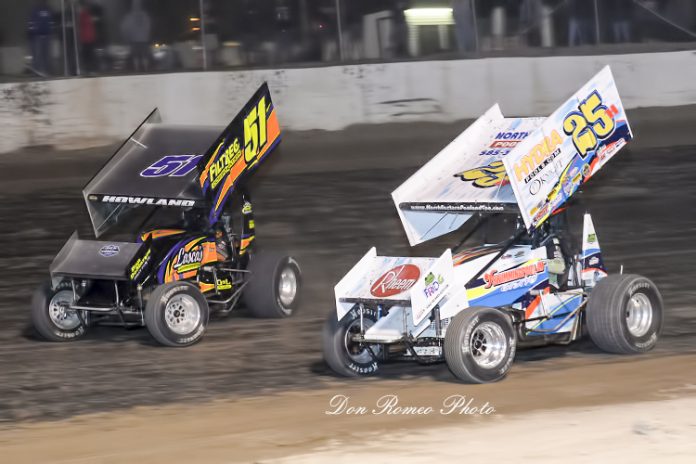 FULTON, NY – After having no wins with the Patriots in 2016, Union Springs, NY driver Bryan Howland has booked his second win in three starts with the A-Verdi Storage Containers Patriot Sprint Tour in 2017 at the Fulton Speedway. It was also his 30th career win in tour history.

Howland started on the outside of the front row alongside Jonathan Preston as the two brought the incredibly stacked 26 car field to the green. Howland wasted no time pulling away from the field as Mitch Brown, Sammy Reakes, Chuck Hebing, and Jonathan Preston would exchange positions in the opening two laps.

Meanwhile, modified talent Larry Wight started tenth and wasted no time getting to the front advancing seven positions to get into third by lap three. He would then battle for second with Mitch Brown as Howland would continue be up front.

Sammy Reakes who was making his first PST start in 2017 was running in the top five until a three-wide battle between him, Chuck Hebing and Danny Varin resulted him in going to the very low line where he struck an implement tire in corner four sending him into the infield where his night would be complete.

The first caution flew on lap seven when Jordan Thomas suffered cosmetic damage on his 79 ending his night early for the second consecutive night. Howland would lead Wight, Brown, Hebing, and Danny Varin at this point.

The A-Main would remain green when Canada’s Cory Tuner was also running in the top ten lost his brakes and went pit side on lap 11. At that point, Chuck Hebing was able to get by Mitch Brown for third and set his sights on the two race leaders in Howland and Wight. Last year’s winner, Danny Varin would also begin to make noise near front eventually sliding into position four. Other drivers who were running in the top ten at the time included; Jared Zimbardi, Jonathan Preston, Dalton Herrick, Darryl Ruggles and Kelly Hebing.

Lap 19 would spot Jeff Trombley spinning into the infield on the back stretch where he went far enough off the track to keep the event green. Howland would find lap traffic and was able to get through it with no trouble, Wight however would meet that same lap traffic but took much longer to get by which would allow Howland increase his race lead.

In the final laps, Chuck Hebing would find the middle line of the speedway in attempt to get by Wight for second but could not create enough momentum to clear him. Howland would take the win for the second time in 2017, followed by Wight, Hebing, Varin, and Jonathan Preston would battle back from his slow start to the A-Main and settle for a top five finish.

Jared Zimbardi would start ninth after winning the Evingham Site Excavation Dash and finish sixth. Steve Collins would have to go to the B-Main after not qualifying during the heat. After finishing second in the consolation event, he would start 24th and advance nine positions to finish 13th. Similar story for Joe Trenca as he was unable to qualify during his heat but would go on to win the B Main and finish 18th. Kyle Drum had to take a provisional after failing to qualify in both his heat and B Main and after starting 25th, he would finish 20th, Dave Just used his second provisional of the season, he will no longer be eligible for a provisional this season. Darryl Ruggles started dead last in his heat but through the passing points system, he finished fourth putting himself into the redraw. He redrew seventh and finished ninth during the 25-lap event.

41 Cars packed the pits at Fulton Speedway, but Robbie Shuttleworth had mechanical issues prior to hot laps and was unable to compete in the events.

The PST Canadian Series will run its second event this coming Friday, June 9 at the Ohsweken Speedway. It then travels across Southern Ontario the following night to the Brockville Ontario Speedway. The Patriots return to the states on Friday, June 16 when they visit Outlaw Speedway in Dundee, NY for the second time in 2017. The series then heads south the next night to the Selinsgrove Speedway for the Joe Whitcomb Memorial.