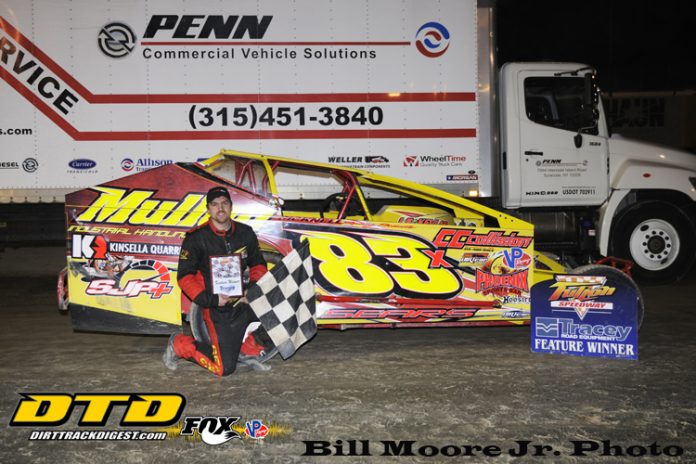 FULTON, NY –  Tim Sears Jr. picked up his second win of the season at Fulton Speedway after a hard battle with Pat Ward.

Jim Witko blasted to lead early from the fourth starting spot, pacing the field early over Joe August and Ryan Jordan. Witko looked strong in the beginning stages of the 35 lap feature, searching for his first win at the track in multiple years.

Meanwhile, Ward quickly advanced from his mid pack starting spot into the top five within the first ten laps. A lap 13 spin by Andy Noto reset the field, and once again Witko was able to skate away from the field, but not for long. Ward continued to advance, driving past Jordan for second by lap 16. After working over Witko for a short time, Ward took command of the field for the first time on lap 19. Witko’s time spent in second was limited, as Tim Sears Jr. stole the runner-up position that same circuit.

Jimmy Phelps had climbed from 22nd into the top five behind teammate Max McLaughlin. Ward had his hands full with Tim Sears Jr. from the moment he reached the lead.

On lap 25, Sears drew even for the lead with Ward, leading for three laps until Ward once again blasted around the top to regain the advantage. However, Ward surrendered the lead to Sears just a lap later, as the pair ran side by side for over five laps. Sears would never relinquish the lead again, as he cleared Ward with four laps remaining and took the narrow victory.

Ward crossed close behind in second, while McLaughin, Phelps, and Chris Hile completed the top five.

“That was a lot of fun. Pat was quick up top, and we were slow and steady on the bottom,” stated Sears in victory lane. “The key to the race was patience, I just had to stay patient and let the race come to us.”

Bryan Howland dominated the Patriot Sprint Tour feature from the pole, leading all 25 laps as Larry Wight and Chuck Hebing dueled for second, with Wight coming out on top. Dale Caswell scored the win in the caution free Late Model feature after passing Bret Belden for the lead on lap 12, as Belden suffered a flat tire. Mike Phelps and Jessica Power split the two Sportsman features. For Phelps, the win was his first in the division, holding off Chris Mackey and Matt Janczuk for the checkered. Power’s win was her first at the track, fending off the challenges of Corey Barker for the victory. Tom Juno and Steve Marshall claimed the two novice Sportsman wins.