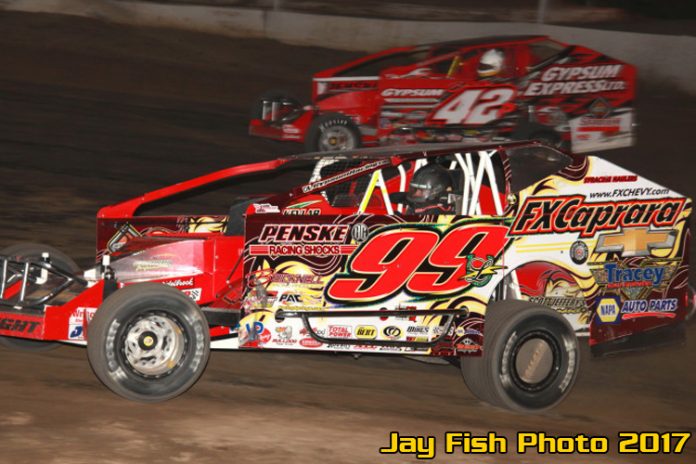 FULTON, NY – For the third time this season, Larry Wight was victorious at the Fulton Speedway. The win extends Wight’s points lead, and moves his winning percentage for 35-lap features at the track this season up to 50%, taking the win in half of the six points events in 2017.

Second starting Matt Hulsizer jumped to the top spot early, looking for redemption after a disappointing run last week, where he went off on the hook while battling for the lead. Hulsizer quickly opened up a large gap between himself and the remainder of the field, but a lap 6 yellow for Max McLaughlin and Tom Sears tangling slowed the pace. Hulsizer picked up right where he left off on the restart, going right back to the cushion and walking away once more.

Behind Hulsizer was three and four wide racing throughout the pack. 18th starting Larry Wight had picked up four spots before the early caution, and rapidly picked off many more after the restart. Wight went to the extreme topside of the speedway and found himself in third by lap 9, advancing 11 spots in three laps. Wight picked off second from Mike Bowman with 13 laps completed, but another yellow for Tim Mayne’s blown tire on lap 15 allowed him to close in on the rear bumper of Matt Hulsizer. However, Hulsizer’s run came to an abrupt end, as he pulled pitside from the lead under the caution, thus handing the lead to Wight.

On the restart, Pat Ward slipped by to take second, while Jimmy Phelps chased him in third. Both drivers showed speed, but neither matched Wight on this run, as he opened up a big lead in just a handful of laps. Tom Sears recovered well from his early tangle, cracking into the top five by halfway. But, a puff of smoke from the rear of Sears’ machine sent him to the pits on lap 18, ending his charge through the field. One final yellow flew with 11 laps remaining, as Tim Kerr also suffered engine issues.

The remainder of the event was yet another Saturday night episode of the Larry Wight Show, as no driver was able to hang close for long in the late stages of the race. Chasing Wight across the finish line was Pat Ward, Tim Sears Jr., Jimmy Phelps, and Chad Phelps.

“We worked out a couple bugs with the car, and now we have it rolling good,” Wight noted. “We just can’t do anything wrong to it. I think we could’ve had something last night at Brewerton if we got a caution to bunch everyone back up, but hopefully this success carries over into tomorrow.”

In Late Model action, Jason Parkhurst nabbed his second win of the season by over 8 seconds, beating Chris Fleming and Kevan Cook in yet another caution free event. Glenn Forward slipped by Michael Stanton late in the first Sportsman feature to take the checkered, while Ronnie Davis survived a wreck-filled second Sportsman race to claim the win.
Chris Bonoffski grabbed another 4-Cylinder win, his second of the weekend, while Tyler Rodgers and John Stricker both grabbed their first Novice Sportsman victories.