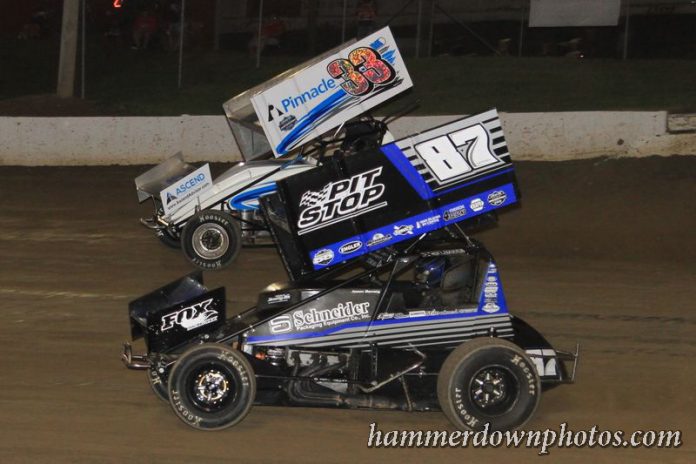 Fulton is close to home for Barney and on Saturday night the Brewerton, N.Y., driver got back on track by winning 25-lap A-Main. Barney worked by Mike Mahaney just before halfway then held off Chuck Hebing and Danny Varin for his second career win at the facility. Barney added to his overall point lead as well as his standing in the NAPA Auto Parts US Tour and SUNY Canton Series points.

“It took not really beating ourselves,” cited Barney in Victory Lane. “We had to focus on what we needed to do and that’s win races. Not worrying about all the other stuff. Regrouping, forgetting about yesterday and living for today.”

The redraw was kind to Barney as he drew the fourth position for the start of the feature. He got a great start at the green but the race quickly came to a halt as Coleman Gulick got over in turn four. Gulick hit the cushion wrong and ended up going over hard and landing on his side. He wasn’t injured but was done for the night.


Mike Mahaney restarted the field with Paul Kinney next to him. Kinney went the top of turns one and two to put himself in front of the field on the opening circuit. Kinney stayed on the cushion all the way around the high-banks while Mahaney followed him early.

Kinney and Mahaney stayed glued to one another at the front as Barney battled with Jonathan Preston for the third spot. It’s a position he was able to take as the leaders reached the back of the field on lap seven.

Mahaney made his move in traffic on lap nine as he dove low in turns one and two to power past Kinney. Two laps later, Barney used the very same lane in the same corner in order to take second from Kinney before focusing his attention on Mahaney.

It took Barney only one more lap to get to the lead. Mahaney opened the bottom lane in the first and second turns. That was just what Barney needed. He wasted little time driving by Mahaney on corner exit to take over the number one spot.

“The bottom always wins at Fulton,” cited Barney. “You can’t live and die by it the whole time, but if you can hit it at the right time it can win the race for you. I really didn’t know what to do when we got to lapped traffic. I felt really good on the top of one and two, but I felt like if I let someone get underneath me the bottom was good in three and four. I’d really screw up. I hadn’t hit the top in three and four all night, so I thought, ‘why would I bother doing that?’ It was something I hadn’t done all night.”

Now the leader, Barney planted himself on the bottom of the race track. He was going to force anyone that wanted to get the lead from him to go around him on the outside.

Barney got his first taste of traffic as the leader on lap 19, but before things became tricky for Barney the yellow came out for a spinning car in turn two. A double-file restart was called for but negated as Dalton Herrick and Mark Smith made heavy contact in turn two. Herrick did a spin through the air but landed on all four tires. He wasn’t injured but his night was done with Smith continuing on.

Barney took advantage of the restart all by himself to drive away. It didn’t last long. Two laps later he had one more challenge to overcome as Preston stopped in turn four with a left front flat. That meant one more double-file restart.

Barney restarted on the inside lane as Mahaney pulled up next to him. He was good at the green with Mahaney, Hebing and Varin going three-wide into turn one. Hebing pulled of a Hail Mary pass to go from fourth to second before leaving turn two.

“I did not like those restarts at the end,” commented Barney. “I’ve been beat here a couple times on that. I was thankful that it wasn’t the 45 (Hebing) next to me because that would have really screwed me up.”

Barney remained untouched as he become the first driver to win three feature events in 2017. Hebing backed up Friday’s win at Brewerton with a second place run. He was happy after getting an incredible jump on the final restart.

“I got a good start there, and Danny (Varin) didn’t get as good of a start or didn’t go down the track as good,” stated Hebing. “I had some good gear in the car. Him and Mahaney were right there and there was a gap so I split the gap. I didn’t think I’d touch anybody and I tried to make move and it worked out. We had a good car.”

Varin also got around Mahaney at the end of the feature to put himself on the podium. He worked over Hebing to no avail. Ultimately he was happy to finish third.

“That was pretty good race me and Chuck (Hebing) had there at the end,” said Varin. “I gave him everything I had. He had us second guessing on that last restart. I didn’t know if he was going to go to the bottom or the top. He just split us both. He did a hell a job.”

Billy VanInwegen had a career best run with the Empire Super Sprints as he finished in fourth. Mahaney ended up fading at the end to finish in the fifth position.

Did Not Qualify – Juliano, Wight