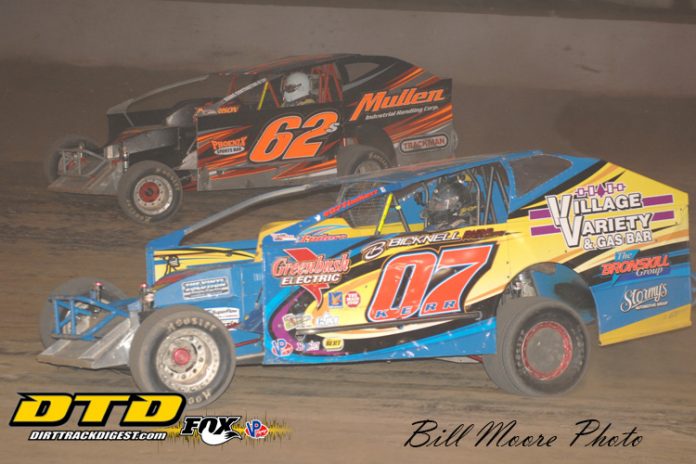 FULTON, NY – Tom Sears Jr. picked up the Modified victory at the Fulton Speedway in dominant fashion Saturday evening, snatching the lead early on and cruising to his second win of the year.

Matt Hulsizer, fresh off a strong second place run at Brewerton, jumped out to the lead in the opening laps, trailed by Tom Sears Jr. and Tim Mayne. Hulsizer never had much time to enjoy his advantage, as fourth-starting Sears rolled past to secure the top spot on lap 8. Hulsizer maintained in second, while Max McLaughlin climbed to third just before halfway. The first yellow of the race flew on lap 17, as Mike Maresca, Tim Sears Jr, and Chad Phelps tangled in turn two. Under the yellow, Jimmy Phelps’s machine shut off while running in fifth, ending his night and perfect record of top five finishes at the track this year.

After mechanical problems in his heat, Larry Wight was forced to start tail on the feature. Wight, unphased by the task of driving from last to the front, had fought his way up to sixth as the field returned green. However, his run came to a halt as a flat right front on lap 22 forced him into the pits and to the rear of the field. Up front, McLaughlin worked past Hulsizer for second and set his sights on Sears, hoping to steal his first ever Modified feature win. After starting 12th, McLaughlin’s run stopped at second, as he was unable to close on Sears in final laps of the event. At the finish, Tom Sears Jr. crossed the line in front of Max McLaughlin, Pat Ward, Matt Hulsizer, and Chris Hile.

Jason Barney grabbed the checkered in race four of ESS Speedweek, rolling past Mike Mahaney late to take the win and turning around a week that Barney noted was not up to his standards. In Sportsman action, Alan Fink got his second win of the day, winning at Brewerton in the early morning hours and taking the victory at Fulton in the late night hours of Saturday. Billy Clark took top honors in the second of two Sportsman events, passing Willy Decker Jr. on the last lap to net his first win of the year. Chad Homan added another Late Model win to his resume, while Jimmy Moyer won in Novice Sportsman.