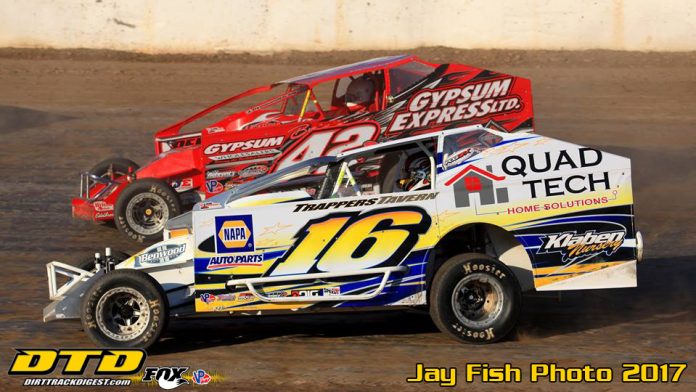 FULTON, NY – Mike Bowman snagged his first Fulton Speedway Modified victory since 2012 on Saturday night. Bowman started deep in the field, but reached the top of the scoreboard early and fended off a late charge to grab the win.

Southern tier native Ryan Jordan took command early in the 35-lap feature event, and set sail looking for his first ever win at the track. Matt Hulsizer gave chase to Jordan, but quickly dropped to third as 12th starter Mike Bowman drove around the outside and into second. Bowman continued to waste little time, snatching the lead away from Jordan with 10 laps completed. As the race reached halfway, Bowman had established a good gap between himself and rest of the field.

Further back, a number of drivers had begun picking their way through the field, such as Larry Wight, who cracked the top five from 18th with 18 laps completed, and the pair of Chris Hile and Bowman’s cousin Jimmy Phelps, who started 10th and 11th respectively. Hile worked up to fourth, while Phelps trailed just outside of the top five. Back up front, Mike Bowman’s lead had begun to shrink, as Ryan Jordan altered his line and was slowly reeling in the Bowman machine. With five laps remaining, Jordan took his shot, leading lap 30 by a bumper, but Bowman held strong and regained the lead a lap later. Over the final laps, Mike Bowman was able to hold Ryan Jordan at bay, beating Jordan to the line by a mere car length to pick up his first win of the season. Chris Hile crossed in third, followed by Larry Wight and Matt Hulsizer.

“It’s taken some time, that’s for sure. We’ve been gaining slowly all year, but we started out pretty slow too,” said Bowman. “About four weeks ago we changed the car all upside down, got a different shock package, and went the completely opposite direction. Recently, we’ve been real fast the first 25 laps, but seem to fade late. We worked all day to figure out how to be fast at the end, and we didn’t seem real good, but we were good enough.”


As usual, the Late Model feature ran caution free, with Jason Parkhurst grabbing his third win at the track this season with a late pass over Bret Belden. Todd Root stole the lead from and held off Chris Mackey to grab the first Sportsman checkered, a big bounce back after destroying the car at Can-Am just over a week ago. After that, Nate Higgens dominated the second feature event to score his first ever Sportsman win at the track. Dakota Bechler went 2-for-2 on the weekend by claiming the 4-Cylinder win, while Jake Davis, brother of Sportsman standout Ronnie Davis III, and Matt Becker took the two Novice Sportsman features.