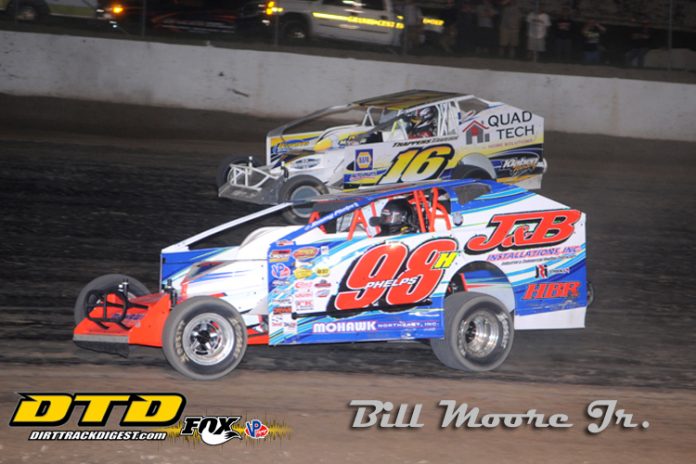 FULTON, NY – Jimmy Phelps finally broke into the win column on Saturday night, picking up the checkered in the 35-lap Modified feature at the Fulton Speedway. The dominating performance was Phelps’ first win anywhere in 2017 and helps close the gap on points leader Larry Wight as the regular season quickly nears the end.

Andrew Ferguson launched to the lead early in the event, driving from fourth to first in the opening lap. Momentum slowed as Tim Murphy spun to a stop on lap two, also collecting Tim Kerr.

On the restart, Ferguson surrendered the lead as fast as he gained it, as Modified rookie and the race’s original polesitter Kody Graham took over the top spot. As Graham led some of his first laps on dirt, drivers battled three wide just behind him. Jimmy Phelps, Adam Roberts, and Ferguson swapped second a number of times, with Phelps firmly claiming the runner up spot with seven laps completed. Just one lap later, Phelps took the lead from Graham.

As Phelps stretched out his lead, the battle behind him continued. Through the middle stages of the race, Adam Roberts, Tim Sears Jr., and Larry Wight waged war, running every groove available on the wide Fulton surface. Roberts held strong in second, but couldn’t hold off Wight forever, with Wight grabbing second as lap 22 went up on the scoreboard.


Wight’s run abruptly ended, as mechanical issues in the front end of his machine sent him spinning to the infield on the middle of the backstretch that same lap. Wight returned after repairs, but was only able to climb back to 11th.

When the field resumed racing conditions, Sears snatched second away from Roberts, but couldn’t hang with Phelps. As Phelps inched away from Sears, another driver inched closer. Pat Ward caught Sears Jr. late, sneaking past and into second with five laps left, but wasn’t able to seriously challenge Phelps for the win.

When the checkered flag waived, it was Jimmy Phelps crossing at the front of the field for the first time this season. Ward chased in second, while Sears Jr., McLaughlin, and Roberts completed the top five.

“We were consistent in the beginning of the year, running in the top three and top five, but we got looking for more and backed up a little bit,” Phelps said in victory lane. “This past month we’ve been really struggling, so I gotta thank all the guys at HBR for continuing to work their butts off this last month with not a lot of results. Hopefully this one will get us moving.”

In another exciting Late Model feature, Sean Beardsley held off a charging Jason Parkhurst for the entire second half of the event, including a two-to-go restart, for his first win at the track this year. Tyler Trump was triumphant in the first Sportsman feature, rolling past Jeremy Pitcher and fighting off a charge by Corey Barker for the win. Chris Mackey returned to Sportsman victory lane in the second feature, dominating the 25-lap event, cruising to the win over Zach Sobotka and Amy Holland. Jimmy Moyer and Tom Juno split the Novice Sportsman mains, while Quinn Wallis picked up his second ever 4-Cylinder win. With 48 SUNY Canton DIRTcar Sportsman and 25 Novice Sportsman signing up for competition on Saturday night, a staggering 73 individual Sportsman cars hit the track during the course of the night.