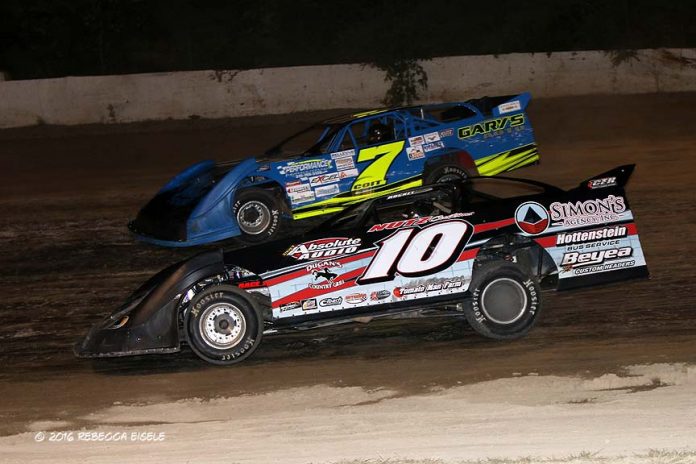 FULTON, NY – Major marketing partner Sunoco Fulton Ethanol Facility and Ehrlich Pest Control will be the presenting sponsors this Saturday, July 29 for a night of fast, family, affordable dirt track racing at the Fulton Speedway plus a yellow-out.

Help us make the Saturday night racing program a Yellow-Out by wearing yellow for Rhabdomyosarcoma Month. Rhabdomyosarcoma is a fast-growing soft tissue cancer. There will also be an auction, door prizes and other activities during the night. All money donated will go directly to Golisano Children’s Hospital in Syracuse, NY to help their fight with childhood cancer.

Rachael Moyer who is the fiancé of Fulton Speedway Late Model racer Chris Fleming and one of our 50/50 girls has this cause very near and dear to her heart. To read her story go to www.fultonspeedway.com and in the news section look for the story with the Golisano Children’s Hospital logo.

After being popular with the fans and racers in 2016, the roofs will once again come off for the highly competitive Billy Whittaker Cars & Trux Late Models. Being run only once a season it’s anyone’s guess who will be sitting in victory lane at the end of 20 laps as taking the roofs off totally changes how the car races.

Adult grandstand admission is $12 with everyone 18 years old and younger FREE. Pit is $27 participant, $30 non-participant. Grandstands open at 5:00 with racing at 7:00.

Starting this Saturday, thanks to Textron Off Road, who is the primary sponsor on Jason Occhino’s Late Model and Max McLaughlin’s Modified, there will be weekly pit tours.

After hot laps at 6:30 a trolley will pick up fans and give them a tour of the pit area each week. The trolley will leave from the Candyland trailer in the midway behind the grandstands in turn four. There will be several trips into the pits to let fans see the cars and drivers up close until just before the start of the night’s racing.

With just over a handful of races left to decide the 2017 track champions, the point races are really heating up. Here are the top-five division point standings coming into July 29
.

The Fulton Speedway would like to welcome back the Sunoco Fulton Ethanol Facility and their employees.

For the seventh straight season the Volney based plant will provide major sponsorship of the 32nd annual Outlaw 200 Weekend to be held September 29 and 30.

The ethanol produced by the Sunoco Fulton Ethanol plant is the Official Fuel of NASCAR.

The Sunoco Ethanol plant spans more than 90 acres and boasts one of the largest privately-owned rail yards in the Northeast with more than six miles of track.

The plant is strategically located in close proximity to the Albany market. This limits the plant and its supplier dependency on rail which has incurred massive delays due to weather, track and equipment repair.

The plant brings in corn by rail from as far away as Columbus, Ohio. But the goal is to maximize local and regional truck corn.

Look for the familiar Sunoco diamond visible at Fulton Speedway throughout the 2017 season.

Ehrlich offers fast, responsive service. Their effective, customized pest control solutions include Fumigation, Bed Bug Control, Termite and many other pest control services – all provided by local offices throughout the east coast from Connecticut to Florida. Contact them today by visiting www.jcehrlich.com/ or call 1-877-452-7613 for the nearest location to your business or residence. As always, remember to support those who support racing.