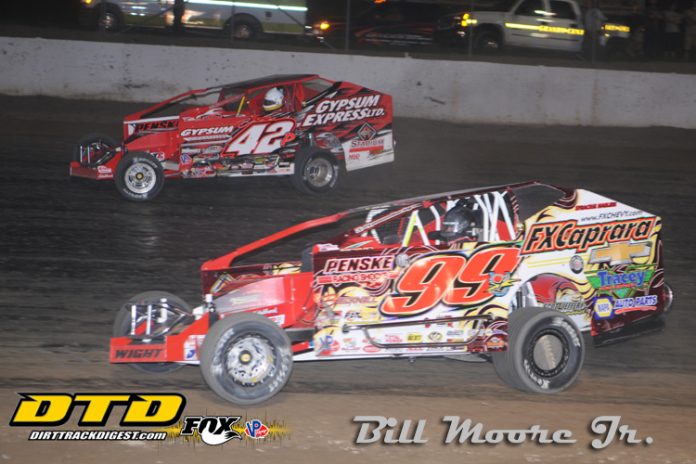 FULTON, NY – For the fourth time this season, Larry Wight parked it in Fulton Speedway victory lane. Wight’s victory was his most dominant of the season, taking the lead early and cruising to the win.

Roy Bresnahan took command of the field at the drop of the green, but all eyes were on a different red car behind him. By lap two, Larry Wight had already charged from his 10th starting spot into second, working a lane further up top than anyone else. Just one lap later, Wight passed Bresnahan for the lead.

Wight quickly established a huge advantage, growing his advantage to a full straightaway over Bresnahan by lap 10. Ryan Jordan and Jim Witko battled for third, but even that battle was half a lap behind Wight. The only yellow of the race flew with 17 laps completed, erasing Wight’s massive lead. However, the unfazed Wight drove away once more when the race resumed.

Over the second half of the feature, Larry Wight went unchallenged. Tim Sears Jr. climbed to second, with Jimmy Phelps slotting into third just ahead of Ryan Jordan. The three put on a good battle, but a battle that took place well behind Wight. Ultimately, it was Larry Wight crossing under the checkered flag ahead of Sears, Phelps, Jordan, and Matt Hulsizer, who came from 11th to complement his win at Brewerton the night before.


“Everyone was battling in front of us, they kept going low and it just left a lane open for us. I just had to hope the hole stayed open,” Wight noted. “We just went through this whole car today and found a couple bugs, but we worked them out and it’s right back to where it was.”

The first Sportsman feature was a thriller to say the least, with the drivers of Mike Button, Will Shields, and Ronnie Davis III running three wide for the lead with under five laps left. Shields’ line on the bottom eventually prevailed, as he soared to his first Fulton win of the year. If a three car battle for the lead wasn’t enough, the second Sportsman feature had four. Michael Stanton grabbed the lead away from Jeremy Pitcher early, but had to hold off hard charges from Nick Krause, Pitcher, and Corey Barker to claim the win.

Kevan Cook dominated the topless Late Model feature, taking the lead at the drop of the green and never looking back. Joe Abbass and Kyle Rood scored the twin Novice Sportsman features, while Quinn Wallis took his second win with his second car in the 4-Cylinders. Casey Sykes scored the Mod-Lite win, fending off a last lap slide job by Justin Williams to take the victory in the first appearance for the division this year. In all, fans were treated to eight features in six divisions, with fifteen qualifying heats being ran.