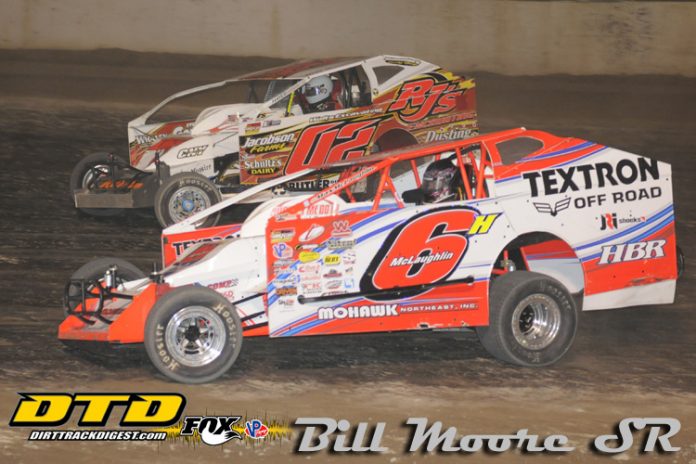 FULTON, NY – The wait is over for Max McLaughlin as he scored his first ever big-block Modified win on Saturday night, driving away from the competition at the Fulton Speedway.

Katelyn Hile took the lead at the drop of the green flag for the 35-lap feature, but relinquished the top spot to Roy Bresnahan two laps into the race. While Bresnahan settled into the lead, Max McLaughlin began making moves, driving from seventh to second in the first eight laps. A lap later, McLaughlin drove around Bresnahan for the lead, rocketing around the cushion and began to drive away.

Behind McLaughlin, Billy Whittaker and Larry Wight were also on the move. Wight broke into the top five on lap 14, then reached third soon after. By halfway, Whittaker and Wight had begun battling for second, but their battle was a full straightaway behind McLaughlin. Wight was finally able to secure the second spot with nine laps remaining, and then took off after McLaughlin.

As the lap counter clicked closer to 35, the lapped traffic got thicker and faster. By the end of the feature, McLaughlin was battling fast cars, attempting to put them a lap down. Wight quickly knocked down much of McLaughlin’s lead.


With five to go, the once big lead had now been cut in half, with Wight possibly on pace to catch the leader before the end. However, McLaughlin made a number of daring moves to get past traffic, allowing him to keep some distance between himself and Wight. When the checkered waived, it was McLaughlin scoring his first ever big-block Modified feature ahead of Wight, Chad Phelps, Tom Sears and Tim Sears. Whittaker crossed the line in third, but came up light on the scales.

“Man, we’ve been working so hard for this moment. We’ve been fast, but just left wondering when this would happen, if it would ever happen,” McLaughlin said in victory lane. “Lapped traffic was really tough, but I’ll run through that all day if it means I can stand here. This means everything, I’ll remember this for the rest of my life.”

The second Sportsman feature was pure domination from defending champion Ronnie Davis III, who switched back to his Bicknell last night at Brewerton after spending the entire season behind the wheel of a Teo. Davis took the lead early in the 25-lap feature and ran unchallenged the rest of the distance.

Chad Homan returned to victory lane in the Late Model division, rolling under Dale Caswell for the lead in the middle of the race and cruising to another win. Rachel Zacharias scored the first Novice Sportsman feature, coming out on top of a battle that saw the top three running three wide for the lead with less than half a lap remaining. Matt Becker, who sells 50/50 tickets at Brewerton in order to earn money to race at Fulton, led nearly the whole way en route to the win in the second Novice race.

23 Modifieds, 16 Late Models, 50 Sportsman, and 18 Novice Sportsman signed in for action Saturday. Surprisingly, 68 individual Sportsman cars is not the high for the season, five off this season’s record coming a few weeks back.