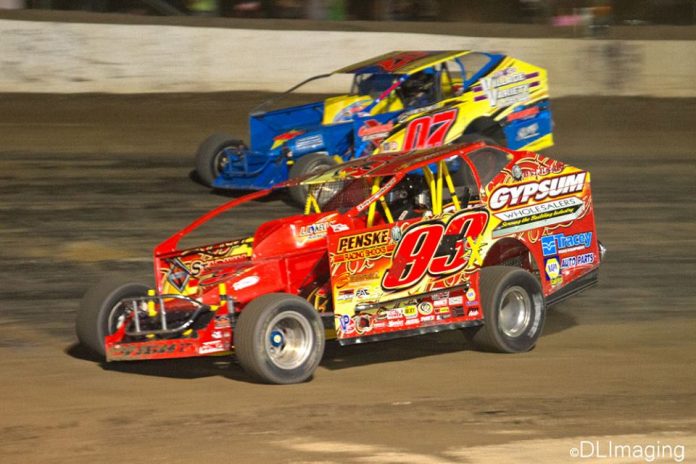 FULTON, NY – On Saturday night, Tim Sears Jr. scored his third Modified win at Fulton this year in dominating fashion. Unlike his previous wins, this one did not come aboard his familiar yellow and red #83x. After losing the engine in his car last week, Sears climbed behind the wheel of Larry Wight’s backup ride, and then drove it to victory.

Tim Kerr took command at the drop of the green in the 35-lap feature event, skating away from the rest of the pack in the opening laps. While Kerr opened up a sizeable margin in the early going, his lead began to shrink as he reached the tail of the field.

By lap 12, Jim Witko had closed to within a car length of Kerr, but a yellow for Chad Phelps a lap later halted the battle for the lead. Behind the top two, Sears Jr. had already made his presence known, charging from 12th up into the top five before the caution.

When the field returned green, Sears was a man on a mission, charging past Billy Whittaker for third off the restart, then blasting by Witko for second a lap later. The battle for the lead didn’t last long, as Sears drove past Kerr for the lead to complete lap 15.


From there, Sears quickly opened up a huge lead over a wild battle for the runner up spot, with upwards of five drivers arguing over who should be the one to chase down the leader.

By lap 24, Jimmy Phelps had firmly taken second from the hornet’s nest of drivers including Kerr, Witko, Tom Sears Jr., Ryan Jordan, and more, but was a full straightaway behind Sears. However, the field bunched up once more as Tim Murphy’s motor laid down a large amount of oil, forcing the yellow to fly again.

Over the last nine laps, Phelps and the remainder of the field put up the best fight they could, but no driver was able to hang with the Sears machine. Sears easily put a solid gap between himself and Phelps, while behind him, Witko and Tim’s uncle Tom waged war for fourth.

Behind that duo, Pat Ward and Max McLaughlin also raced side-by-side, but a long distance behind the race leader. When the checkered flag waived, it was Tim Sears Jr. cruising to his third win of the year over Phelps, Witko, Tom Sears Jr., and McLaughlin.

“I got to thank John, Laura, Larry, and the whole Gypsum crew for lending us a car for the weekend,” noted Sears. “We had bad luck last weekend and lost an engine, and I just have to thank these guys for giving me something to drive. Lapped traffic was a bit of a challenge, but I just had to keep the rear tires under me, but with the car being good, it was fun.”

Dale Caswell dominated the Late Model feature, leading wire-to-wire in yet another caution free race for the division. Behind Caswell, Bret Belden and Chris Fleming raced hard for second the entire feature, with Belden coming out on top of that battle. Two new faces visited victory lane in the Novice Sportsman features, with Wesley Hayes walking away to claim the first race, and Tim Abate nosing out many time 4-Cylinder winner Chris Bonoffski to score the win in just his third time behind the wheel.

Corey Barker claimed his first Sportsman win since 2015 in the first of two features, rolling under leaders Nate Higgins and Todd Root with ten laps remaining, then holding off Ronnie Davis III in the final circuits. However, the second feature was not the scheduled 25-laps, as rain hit the speedway just a lap after halfway. Alan Fink had just taken over the lead before the rains came, halting the race with 13 laps completed and giving Fink his third win of the year at Fulton.