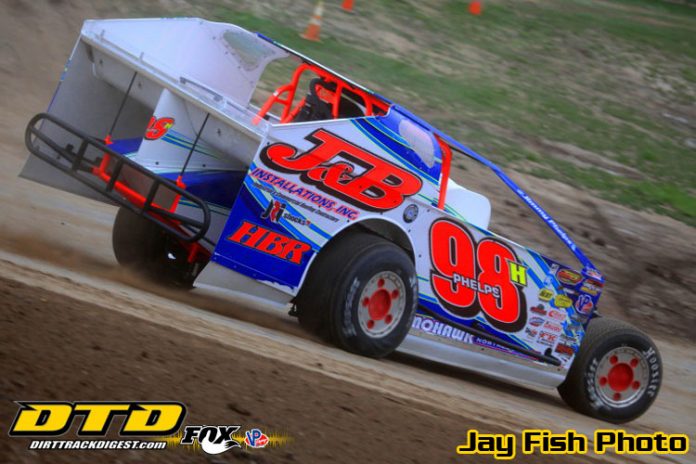 FULTON, NY – “The Baldwinsville Bandit” Jimmy Phelps scored a crucial win on Saturday night at the Fulton Speedway after a duel with Billy Whittaker spanning the entire second half of the event.

Polesitter Joe August led the opening circuit of the 35-lap Modified feature, but was quickly overtaken by Billy Whittaker. Whittaker couldn’t run away and hide just yet, as the only yellow of the feature flew on lap three for Tim Murphy. On the restart, Whittaker rapidly motored away from August, but Phelps was the man on the move, climbing from tenth to fourth in the first five laps.

While Whittaker kept a steady lead over second, the battle for that second spot began to heat up. By lap 15, Phelps had secured the spot from both August and Tim Kerr, then he began closing in on Whittaker.

Over the next ten laps, Phelps tried many lines to snag the lead away from Whittaker, running high, low, and everywhere in between. After drawing even a few times, Phelps got the run he needed coming to complete lap 27, passing Whittaker for the lead. However, Phelps slipped up the very next corner, handing the lead back to Whittaker. Whittaker’s second stint in the lead was extremely brief, as Phelps regained the lead once more just seconds later – this time for good.


Over the last seven laps, Phelps stretched out his advantage over Whittaker, cruising to his second Fulton Speedway win of the year. Whittaker crossed in second, followed by Kerr, Mike Bowman, and Tom Sears Jr.

With a sixth place finish, Tim Sears Jr. gained the points lead, but is a mere single point ahead of Phelps and just ten markers in front of Larry Wight entering the final event next weekend.

“That’s just a testament to Billy Whittaker, to take 15 or 20 years off and still be really good, and he’s been really, really good all year,” Phelps noted. “I felt awesome, and I had a hard time catching him, so that’s a testament to his car. I just gotta thank all my guys for busting their tails, we’ve been struggling and struggling, and we went to Teo and got another chassis, and man, this thing is dynamite.”

For the first time ever in Fulton’s history, the Sportsman field was split into three features rather than two due to the massive 55-car field. Once Alan Fink reached the lead in the first feature, the race was effectively over, as Fink romped to another dominating win at the track. After ending a two-year drought last week, Corey Barker went back-to-back in the second event, scoring the win after slipping by Nick Krause and Dylan Zacharias in the final laps in a thrilling three-wide battle. Todd Root claimed the win in the third and final 25-lap battle, coming out on top of a fight with Jeremy Pitcher and Wade Chrisman in the late stages.

In Late Model action, Jason Parkhurst survived constant pressure from Chris Fleming throughout the 20-lap feature, holding off the defending track champion for yet another victory. Novice Sportsman mains were split between Robert Gage and Wesley Hayes, both of who dominated their respective races.