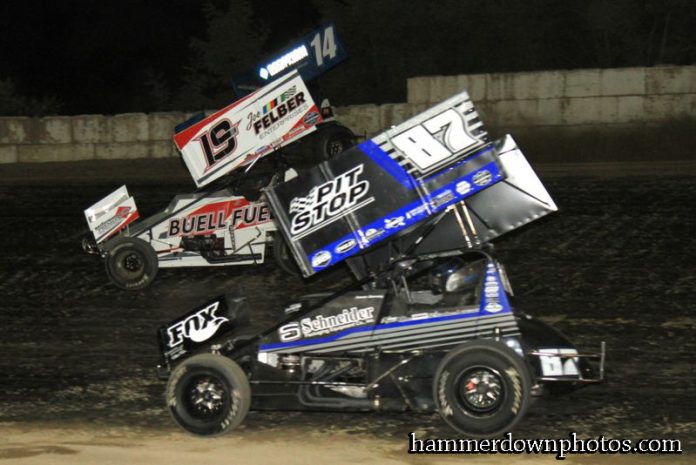 FULTON, NY – Jason Barney officially wrapped up his first Lucas Oil Empire Super Sprint championship by virtue of his runner-up finish on Friday night at Brewerton Speedway. Although he got the title, the Brewerton, N.Y., driver wasn’t happy that he let a win slip away on the final lap of the A-Main. On Saturday night Barney wasn’t going to let that happen again.

Barney redrew the pole position for the main-event at Fulton Speedway. He wasn’t going to be denied as he was never seriously challenged throughout the 25-lap feature to claim his fourth win of the 2017 season and his second of the year at the facility. The win earned him $2,100 and points toward the NAPA Auto Parts US Tour standings as well as the SUNY Canton Racing Series.

“It’s nice to have confidence,” said Barney. “We’ve been a little down on ourselves since we won here back in July. We went into a little slump. We’ve been on a roll with some seconds and thirds in races we thought we had chances at winning. Even though you finish second you feel down on yourself for not closing them out at the end. We had a couple chances these last couple weeks. This is great. I’m proud of my guys, proud of my race team and my race cars.”

The championship is Barney’s first after coming up second numerous times over the past several seasons to seven-time and defending champion Steve Poirier. He had nothing but praise for Poirier as he feels like that’s what helped him get to the point where was able to have a championship caliber season.


“I’m very lucky and very blessed to have a great race team that supports me, great sponsors and a great family,” commented Barney. “I’ve spent a lot of years chasing the 28 (Poirier) and the 28 wasn’t with us all year. He made us better, he made us a championship team. We emulate what he does. We work as hard as he does and we tried to build a program like he has. I want him to come back. I want to go head to head with him. He’s the best, we were just best this year.”

Barney was flanked by Shawn Donath for the start of the main. Barney jumped out at the green tucking right down on the bottom of the speedway. He got as close as he could to the yuke tires on the inside of the track as he could.

“It was nice to start up front,” mentioned Barney. “I was more nervous starting on the pole than I was starting 21st last night. I knew my guys gave me great race car. This is my race track, hug the tires and hope nobody is better.”

Barney pace was a good one as he pulled away quickly from the field. By lap seven he already found himself dealing with cars running at the tail end of the field while being pursued by Bryan Howland. He struggled a bit to get through as several of the slower cars were in his preferred line on the bottom.

Three circuits later on lap 10, Barney got a break from traffic as Robbie Stillwaggon rolled to a stop on the top of the fourth turn to bring out a yellow. When the pace picked back up Barney was able to again drive off from the field.

As Barney controlled the pace, Howland fought with Matt Tanner to keep the second position. Tanner found a great line through the middle of the track while Howland mirrored Barney by running the bottom of the racing surface.

Mike Kiser had a top five run come to an end when he caught one of the tires on the bottom of the track causing him to go around in the fourth turn on lap 19. This caution cleared the way for Barney as he had just moved into traffic a second time before the yellow.

Barney made no mistakes after the green came again. He stayed true to his line on the bottom gapping Howland and Tanner as they tussled for second. Eventually Tanner was able to snag the position. Before he could mount a charge the race was over with Barney taking the win.

Tanner was happy to have something go his way on Saturday. Tanner, of Stephentown, N.Y., made a couple mistakes on Friday and ended up fifth. His second place finish was a nice pick me up for him and his team after he started in position 13.

“The guys gave me a really good car tonight,” said Tanner. “Driver error caused us to give up a top five last night, but I think we made up for it tonight driving from 13th to second. I just wish I had a restart at the end to line up next to Jason (Barney). I really liked to be on the outside for the restarts. I think all of our restarts were on the bottom. It took me too long to get it sorted out after a caution to get everyone lined up back on the bottom.”

Danny Varin hovered between fourth in fifth throughout the main before he got rolling after the final caution. Varin got by Howland and held off Larry Wight on the last two laps to finish third from the eighth spot.

“That one was tough,” mentioned Varin. “We really fought our way right to the end. We just kind of missed it. We didn’t make the right adjustments tonight. This place always throws me a little bit of a curve ball. I’m always a little too tight or a little too loose, I’ve never felt great here. Tonight we were a little too lose. We’ll have to write it down in the notebook for the next time we are here.”

Howland fell back to finish in the fourth position while Wight drove his way from the 12th starting spot to fifth. A total of 36 sprints filled the pits.