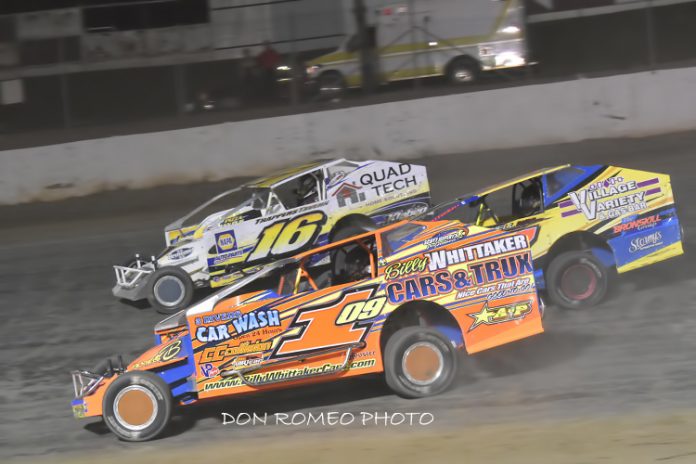 FULTON, NY – Billy Whittaker scored his first Fulton win of the year in a wild 35-lap Modified feature, holding off Tim Sears Jr. and Jimmy Phelps, both of who fought head-to-head for the track championship.

Kody Graham led the opening three circuits of the Modified main before surrendering the lead to Ryan Jordan following a lap three restart. Jordan and Mike Bowman dueled for the top spot early on, with Bowman eventually securing the spot. Behind them, championship contenders Jimmy Phelps and Tim Sears Jr. had climbed to fourth and sixth respectively by lap 12, with the higher finishing of the two being crowned track champion. A second yellow flew with 15 laps completed as Jeff Crambo’s wheel came completely off of his ride, forcing another restart.

On the restart, contact at the front of the field sent Ryan Jordan spinning in front of the pack, collecting a number of cars. While all drivers continued, Jimmy Phelps was sent to the rear of the field for contact with Jordan, seemingly eliminating any shot at the title for the #98H.

A second and cleaner attempt at resuming the race was made, with Billy Whittaker taking over the lead. Sears, Hile, Kerr, Bowman and others battled behind Whittaker, but a couple of cautions on laps 19 and 26 kept Whittaker intact with the pack.

The biggest beneficiary of the cautions was Phelps. After restarting at the rear of the field with 20 laps remaining, Phelps had quickly charged back inside the top ten. As Sears inched closer to the front, Phelps gained more and more spots. With under five to go, Phelps had climbed to third behind Whittaker and Sears.

With the top two running the bottom, Phelps switched to the top in turns one and two and continued to close. With the white flag waiving, Sears had reached the rear bumper of Whittaker, with Phelps coming fast. As Whittaker held on for the narrow victory, Phelps and Sears crossed the line side-by-side for second and the championship, with Tim Sears Jr. beating Phelps to the line by no more than two feet for the spot.

“We did not expect this,” Whittaker noted. “We just got really lucky, the bottom opened up and we just started putting around and passing cars. It’s just awesome to take the Billy Whittaker Cars & Trucks #109 to victory lane here on the final night, it just feels awesome. I’ve been back for three years so I finally feel like I have some experience.”

The title is Sears’ first anywhere since moving up to the Modified division in 2012, now joining his uncle Tom as a Fulton track champion.

“I saw Jimmy on my outside on the last lap and just thought ‘Oh boy, this is going to be good,'” said Sears. “He went to the back on that restart, and after passing all those cars I knew he had to be fast.”

Kevan Cook and Jason Parkhurst entered the night tied for the points lead in the Late Models, but it was all Cook’s show, as he led all 20 laps en route to the dominating win and title over Parkhurst. In a similar situation in the first Sportsman feature, Ronnie Davis III and Todd Root were separated by just two points entering the feature, with both drivers starting in the middle of the field. Davis reached the lead with 10 laps remaining, sneaking around the outside of Tyler Trump to score his second track title of the year. Nick Krause cruised to the win in the second Sportsman main, taking his second victory in as many nights after claiming the win at Brewerton the evening before. Casey Cunningham and Bill Sauve both picked up their first ever Novice Sportsman victories, but neither could celebrate, as rains halted the second feature just past halfway and postponed the winning ceremonies until Outlaw weekend.

The Lucas Oil Empire Super Sprints joined the regular classes on Saturday, with 2017 champion Jason Barney wiring the field for the victory. Barney started on the pole of the 25-lap main and cruised to the checkered, first driving away from Bryan Howland and then Matt Tanner through a number of restarts.