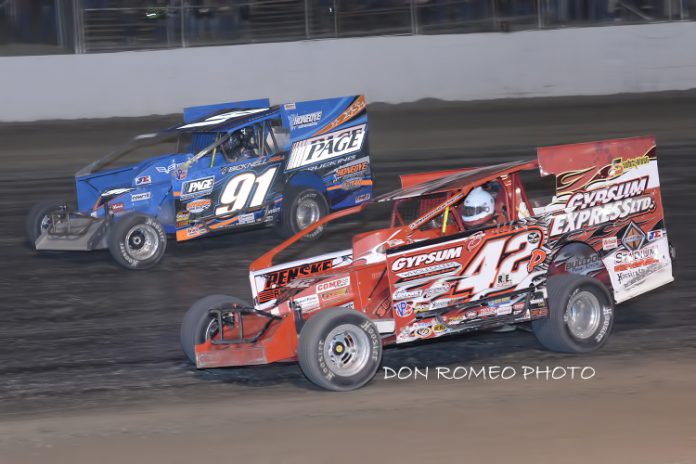 FULTON, NY – With Fulton Speedway track championships in the past, and three previous Sunoco Fulton Ethanol Facility Outlaw 200 wins, there was no doubt Billy Decker knew how to win at the speedway. Decker, the ‘Franklin Flyer,’ used that experience as he dominated the $20,000 to-win 32nd Annual Outlaw 200 presented by SUNY Canton.

Decker started 13th in the 46-car starting field, taking the lead from Tim Sears Jr. on lap 46. Decker would only lose the lead for one lap (77) to Peter Britten the rest of the 200-lap distance.

“When you have been here for so long, you figure a few things out,” Decker said about the years logged around the Fulton Speedway and seeing two different race surfaces in one race. “We stumbled upon some things a few years ago and we will keep doing it until the wheels fall off, and then we will kick up our feet.” The way Decker keeps picking up wins and podium finishes, retirement doesn’t look like it is coming soon.

Justin Wright would lead the opening laps as the racing behind him was two, three and sometimes four-wide throughout the field in the 200-lap game of speed and also patience.

At the 20-lap point Sears opened a 2.8 seconds lead while behind him in heavy traffic, Mike Bowman, Pat Ward, Danny Varin, Mike Maresca and Billy Decker battled for position while keeping the leader in sight.

On lap-36 Decker made his way through the top-five into the runner-up spot as he looked for a way to reel in Sears. After a couple caution periods, Decker would go to the top of the speedway to be scored the new leader on lap-46.

At the halfway point before the 100-lap break the top-five would be Decker, Sears, Varin, Billy Dunn from 27th and Peter Britten.

With 70-laps showing on the scoring tower Decker and Britten were slugging it out in and out of traffic, battling for the lead and putting on a show for the fans. Sears, Varin and Dunn were still in the hunt a few car lengths behind the top-two.

On lap-77 Britten used a lapped car as a pick to get by Decker to be scored the new leader. His lead was short lived as Decker was able to get back by, still mired in heavy back markers.

Decker would open a two-second lead and looked to run away and hide before the halfway break. Britten had other ideas as he was able to reel in Decker and once again as the two put on a show still in lapped traffic racing bumper to bumper and side by side when the caution would wave on lap 91.

Two yellows just before halfway would affect the second and third place cars. Tim Sears Jr.’s night would end when running in third place he made contact with Britten. Britten would suffer a right front flat after contact with Decker but would be able to make it to the halfway break. Both incidents were just hard racing.

When the green came back out for the final 100-laps Decker and Dunn took off in a car breakaway race for the lead. Just 10-laps into the second segment Decker flexed his muscle, bolting away from the pack.

With 120-laps showing on the scoring tower Decker showed no signs of slowing down with a 3.2 seconds lead ahead of the tight race behind him between Dunn, Hulsizer, Britten and Williamson.

After some caution laps around the midway point of the second 100 Decker would still show the way at the front of the field.

When the race got back to consecutive laps of racing Decker and Britten once again raced in traffic with Britten looking for any advantage he could use to get by Decker. Dunn, Hulsizer and Maresca showed on the scoring tower in third through fifth.

The top-five would change on lap-164 when Dunn looped it collecting Hulsizer and Maresca.

On a restart Britten looked like he knew the preferred groove of the speedway was on the bottom so he had to try something different and went to the top and lost five positions.

With 25-laps to go the only thing that didn’t change in the top-five was the leader, Decker. Mahaney, Williamson, Wight and Alan Johnson raced in second through fifth.

Over the final laps the only things that slowed Decker down were yellows and getting by lapped cars. Chasing Decker across the line finishing second through fifth were Mike Mahaney, Larry Wight, Alan Johnson and Danny Johnson. Pat Ward, Peter Britten, Erick Rudolph, Chris Hile, and Bobby Varin completed the top-ten.

“I told Mike (Payne) what it was doing and what I thought it needed,” at the halfway break, “And the crew scrambled nailed it, it was perfect after that,” Decker said from a jubilant victory lane with his crew.

Mike Mahaney for the second year in a row finished in the runner-up spot, but there were still high fives and handshakes with his Buzz-Chew Chevrolet team. “It just didn’t go the way we wanted it to. On one of the last restarts we got hit and got a major vibration and just held on to the end without breaking,” said Mahaney. “To come from 37th to second is a great day.”

Mahaney related that he loves to win, but second pays ten-grand and you can’t complain about that. He finished up by saying his dad, Jim had run the 200 since the beginning and always had something happen and hopes to win the race someday for him.

Larry Wight who started 45th got hard charger of the race with a third-place finish related what a long day it was but was happy with a podium finish and how he was able to somehow avoid an incident that involved the second, third and fourth place running cars. “That was luck more than anything else,” said Wight. “Was able to get on the binders quick enough and not lock it up and keep going. We were able to keep the tire under us and get a podium finish.”

“You never want to start that far back (45th) but we were able to work our way forward and get to the break. It gives us an opportunity to make ourselves better or dial ourselves out. Luckily we made it a little better.” 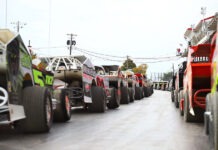 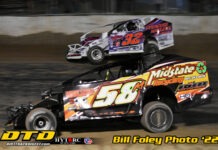 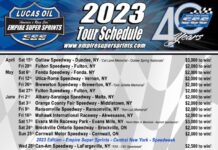