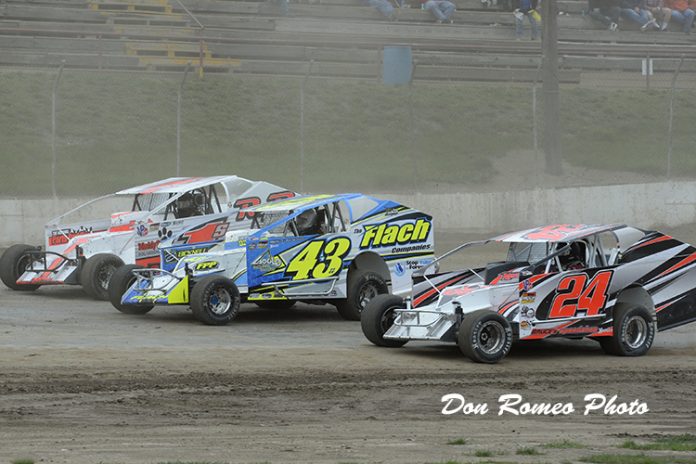 FULTON, NY – In less than a week the Fulton Speedway will roar back to life with one of the “Must See” events of 2018 with the “Highbank Holdup” weekend on Friday & Saturday, April 27-28.

Friday, April 27 the winged warriors of the Lucas Oil Empire Super Sprints will unleash their methanol breathing beasts on the ‘Highbanks’ when some of the best 360 Sprint Car racers in the Northeast will be pit side. Joining ESS will be race number-one of the DIRTcar Sportsman Championship Series that brings together the top Sportsman talent anywhere. Modified Super DIRTcar Series and Billy Whittaker Cars & Trux RUSH Late Models will have hot laps to shake their cars down for Saturday.

In 2017, 40 of the best Lucas Oil Empire Super Sprints racers signed in the pits to do battle. It took four heats, two B-Mains and a Dash to set the A-Main starting field. After 25 hard fought laps Chuck Hebing out ran Danny Varin, Cory Turner, Bryan Howland and 2017 ESS champion Jason Barney for the popular win.

In last year’s DIRTcar Sportsman Championship Series race, 52 cars signed in the pits that would see five heats and two consolations to set the field for the ‘Highbank Holdup’ 40. Fulton Speedway regular Todd Root bested 51 other cars, setting the fastest time in time trials and then won his heat and the feature. In the 40-lap main, Root would outdistance Tyler Trump, Dave Marcuccilli, Jeremy Dygert and Shane Pecore.

The biggest question coming into Saturdays ‘Highbank Holdup’ 100 for the Modified Super DIRTcar Series is can anyone unseat the ‘Franklin Flyer’ Billy Decker? Already in Decker’s trophy case is the 2015-2016 and 2017 event trophies. Last year Decker took the lead from Brett Hearn just before halfway and then over the last 20 laps had to hold off strong challenges from series champion Matt Sheppard for the popular win. A stout field of Big Block Modified Series stars and local favorites will be looking to put an end of the stranglehold Decker has on the first points-paying SDS race in the Northeast.

Any questions you might have about the 2018 racing season and for marketing opportunities, please contact Cory Reed at 315-593-6531 or cory@fultonspeedway.com . For all the latest news go to www.fultonspeedway.com and like the track Facebook page www.facebook.com/FultonSpeedway.