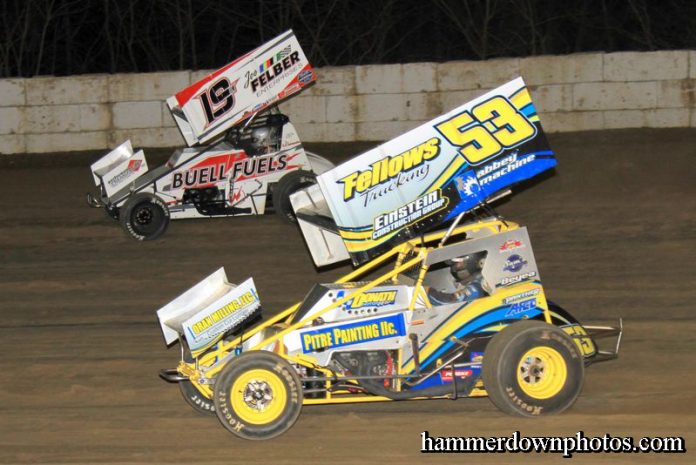 FULTON, NY – For Durhamville. New York’s Paul Kinney visiting the Victory Lane with the Lucas Oil Empire Super Sprints (ESS) hasn’t been an unfamiliar site. But, for some odd reason all four of his career wins had been north of the border on Canadian soil.

All that changed on Friday night at the Fulton Speedway when he passed Shawn Donath on lap 11 and held off defending champion Jason Barney to pick up a very popular $2,050 victory in front of many family and friends. His now fifth victory of his career was also a NAPA Auto Parts US Tour event.

“You know I tell everyone that a win is a win, but to win here where many remember me from my modified days does make it more special,” said the happy winner, “We all travel together on ESS and enjoy anytime to can get the checkered flag, but to happen here definitely makes it my favorite.”

Billy VanInwegen and Shawn Donath made up the front row and when the green flag dropped Donath immediately took charge. Kinney started in fourth with his family owned #19K and made it known he would be a challenger for the win right from the start…and in unusual territory.

“I was running unfamiliar territory by being on the top but my car was fast there so I stuck with it,” Paul then told of a lap 10 restart, “I had such a good restart on Shawn and was able to slide up and take his lane and that was key.”


With Kinney now out front, it soon became a race of strategy, nerve-wracking strategy mind you. “When you’re leading it’s so tough to do, when you have Jay (Barney) and Shawn behind you, you keep looking at the scoreboard,” he went on, “Steve (Poirier) is here and you see the 00 (Danny Varin) coming, looking at that thing can be the worst thing you can do!”

Barney was coming from his sixth place starting position, got up to second and then started to chase down Kinney. The excitement peaked on that last lap when Barney showed his nose down low and that made Kinney do a lay change to protect.

“I saw Jason down there and so I had to make the switch, he is just the best and luckily it worked out and got the win,” Kinney then summed up his emotions, “It’s going to be a fun night I can tell you that!”

For Jason Barney, the goal is to repeat his championship and coming off a win at Outlaw mission is well underway. At Fulton he felt he had a chance to pick up another. “I had a real good car but for some reason I just couldn’t get going in restarts, I was giving up some ground so I had to fight to get that back,” the Brewerton, NY resident continued, “Paul and Shawn was setting a real good pace and I just wasn’t good on top so had to keep working.”

As mentioned earlier it came right down to the last lap, “I had a good turns one and two and was able to get alongside of him (Paul) there on the back stretch,” Barney went on, “Paul did a good job, he did what he had to do to win…that’s the way it goes. It’s a long season and we come out first and second, our goal is to show everyone last year wasn’t a fluke so we are happy.”

For Danny Varin, his first ESS start of 2018 came away with a podium finish. “I think we had more under the hood, I just think we ran out of time (starting in 11th), we needed some clean air,” said the driver of the 00, “The guys ahead of me were taking up the lanes so it was hard for me to find one in hopes to make a pass. I think I had more, just didn’t have the opportunity.”

Donath did take home a fourth place finish after a torrid side by side duel with Kinney for the first half of the race, seven-time ESS champ Steve Poirier rounded out the top five. The next five was 21st starting Mike Mahaney, 24th starting Tommy Wickham, who earned the hard charger bonus, Dylan Westbrook, Coleman Gulick and Alex Vigneault

ESS/FULTON NOTES: Despite weather all over the area, the Fulton Speedway pushed on to get the show in with a nice field of 32 sprints in the pits…Parker Evans and Pete Richardson found got upside down but both walked away unharmed…Coleman Gulick was forced to change an engine after the heat events and still brought is #14 home with a top ten…Matt Billings qualified but his car lost power on the white flag lap and didn’t start he A-Main, crew thinks electrical issues…A couple of weekends off before the Lucas Oil Tour goes full bore with two $2,000 to win, $275 to start events at Outlaw Speedway, May 18th and a return to Thunder Mountain on May 19th.