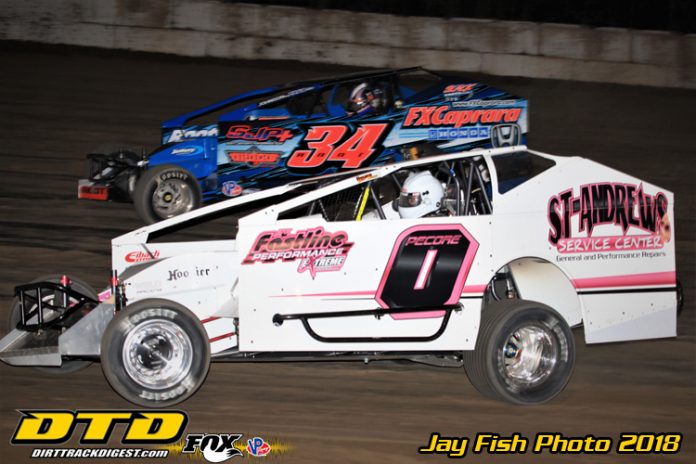 FULTON, NY – Shane Pecore got things off on a high not Friday night at the Fulton Speedway by claiming the Sportsman main-event as part of the Highbank Holdup weekend.

“After last year’s issue, we had a lot of doubters over the winter,” Pecore noted. “We worked our tails off since August. Night after night in the shop, hired whoever it took. We put tons of hours in this thing, and it’s pretty special tonight.”

David Schilling claimed the lead when the green flag waived for the 50-lap brawl, with Kevin Root sliding in behind. Schilling kept a slim lead for the opening laps before perennial front-runner Brad Rouse broke something in the front end exiting turn two, helplessly sliding across the track and through a pack of cars. Somehow, nobody hit Rouse’s disabled machine on the lap seven incident, but this put Root and Pecore right on the rear bumper of Schilling for a restart.

Pecore, who was fastest in Tuesday’s test at Fulton, didn’t waste much time going to the lead, driving around the outside of both Root and Schilling to take command with ten laps completed. In just five more laps, Pecore managed to establish a lead of a full straightaway, but it was eliminated as a wad of cars came to a halt on lap 15. Four more laps ran clean, but another wreck meant Schilling and Root had another chance.


On this restart, Pecore caught the cushion the wrong way, allowing Root to take the lead and Schilling to slide back into second. Pecore wasn’t giving up yet, as he drove back around both drivers to reclaim the top spot on lap 23. Another couple of cautions allowed Matt Janczuk and Dave Marcuccilli to climb the scoreboard, slotting into second and third by lap 30.

By this point, Shane Pecore had moved to the bottom of the speedway, mirroring Janczuk’s and Marcuccilli’s line, and wasn’t able to get away quite as fast as before. Marcuccilli began to apply heavy pressure to Janczuk around lap 35, but Marcuccilli’s pace slowed with a broken right front shock tower. He hung onto third for the time being, but lost touch with the leaders.

With ten to go, Janczuk was closing on Pecore. Marcuccilli was falling into the clutches of Root and Jessica Power, who were waging a close battle for fourth. Root and Power both slid around Marcuccilli with five laps left, right as Janczuk was entering firing range of Pecore. With two parallel flags shown to the field, Janczuk had closed to the rear bumper of Pecore in the center of the turns, but entering turn one on the last lap, Janczuk slid off the bottom and lost some time. However, Pecore did the same entering turn three, allowing Janczuk one last shot coming to the finish.

Janczuk tried, but Shane Pecore crossed the line first to claim victory in the DIRTcar Sportsman Series opener at Fulton. Kevin Root claimed third by half a car over Jessica Power, while Dave Marcuccilli limped home in fifth. 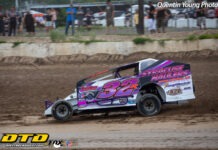