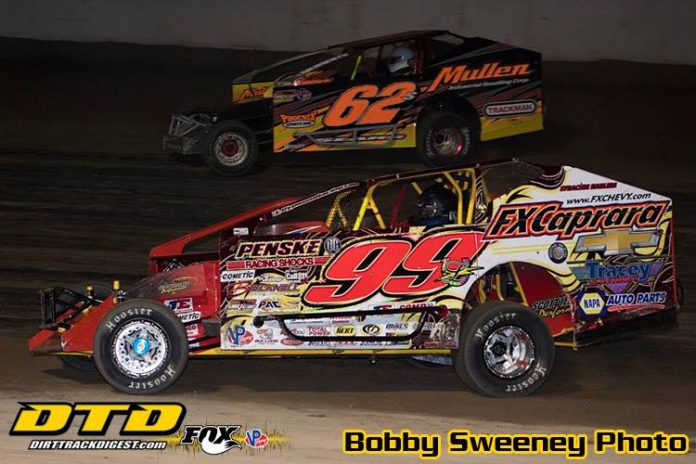 FULTON, NY – Saturday night at the Fulton Speedway fans were greeted by a pit once again that had over 100 race cars that saw close finishes and first-time winners on the ‘Highbanks.’

In the Tracey Road Equipment DIRTcar 358 Modifieds, Larry Wight parked his FX Caprara Chevy/Tracey Road Equipment/NAPA/Penske Racing Shocks/LJL Kevlar Racing Engines/No.99L in victory lane. The win was anything but easy as Wight and Tom Sears Jr. had a side-by-side battle lap after lap with Wight finally making the winning pass on lap-27 in the 35-lap feature.

Rich Richner and Joe Shields would lead the Tracey Road Equipment DIRTcar 358 Modified field down to the green with Richner grabbing the early advantage in the 35-lap feature.

With 5-laps complete, Richner and Tom Sears Jr. were locked in a tight fight for the lead with Tyler Meeks, Todd Root, Pat Ward and Larry Wight in a close race of their own for third through sixth.


With 10-laps showing on the scoring tower, Richner opened a little breathing room with a ten car-length advantage out front. You could have thrown a blanket over Meeks, Sears, Ward and Wight as they used every inch of the speedway racing in the top-five.

After a quick yellow on lap-12, it would take Tom Sears Jr. just 4-laps running the top of the speedway to wrestle the lead away from Richner with Wight moving to second one lap later.

By lap-20 Sears and Wight were in a two-car-breakaway at the front of the field with Ward, Richner and Jordan McCreadie showing third through fifth on the scoreboard.

Sears and Wight would put on a show, running bumper-to-bumper and side-by-side, lap after lap with neither racer having much of an advantage using the bottom, middle and top of the speedway.

The difference in the race and winning pass came on lap-27 when Wight found the bite he needed on the bottom of the speedway to get by Sears and go on to the win. Tom Sears Jr., May 5th feature winner Tim Sears Jr., Pat Ward and Jordan McCreadie finished second through fifth.

For the second week in a row over 60 SUNY Canton DIRTcar Sportsman were pit-side setting up three 25-lap features.

In the first feature Rick Miller would lead the opening 3-laps until Willy Decker Jr. used the top of the speedway exiting turn-four to be scored the new leader on lap-4.

With 10-laps complete Decker bolted out to a half-a-straightaway lead over Tyler Thompson, Miller, Brett Draper and Chris Mackey just before a yellow that would erase Decker’s lead.

Thompson would take advantage of the yellow by taking the lead when the green came back out.

In the second Sportsman feature Amy Holland would set the early pace grabbing the lead at the drop of the green.

Holland would hold the narrow lead until a yellow on lap-11 and restart that would see Tony Finch II use the top of the speedway to drive by Holland to be scored the new leader.

With 10-laps to go, Finch, Holland, Jackson Gill, Kevin Root and Brandon Ford ran in a tight pack with no driver having a big advantage.

The winning pass of the race came on lap-19 when teenager Gill pulled a perfect racing veteran slide job on Finch in turn two. Once out front, Gill cruised to his first ever Fulton win. Tony Finch II, Brandon Ford, Amy Holland and Kevin Root came home second through fifth.

In the final 25-lap Sportsman main, Scott Prentice would lead the opening 5-laps before Colby Herzog grabbed the top spot on a lap-6 restart.

At lap-10 you could have thrown a blanket over Herzog, Prentice, Ricky Yelle, Mark Yorker and Stephen Marshall when Yorker suddenly slowed ending his run for the night.

With 10-laps-to-go it was still anyone’s race with Prentice, Jessica Power, Herzog, Billy Clark Jr. and Marshall all still in contention.

On lap-26, Power would find the bite she needed on the bottom groove of the speedway to bolt into the lead. Once out front there was no denying Jessica Power as the Canadian was first under the checkers for the fan favorite win. Billy Clark Jr., Nick Krause, Stephen Marshall and Wade Chrisman brought home second through fifth place finishes.

The 20-lap Billy Whittaker Cars & Trux RUSH Late Model feature was a barn-burner from the drop of the green to the checkers.

Bret Belden would bolt out to a two-second lead on the rest of the field until a yellow on lap-6. On the restart Chad Homan grabbed the lead with Kevan Cook right in his tire tracks.

On lap-8 Cook digging on the bottom of the speedway would be scored the new leader of the race.

At the halfway point the show was on at the front of the field with Cook and Belden pulling away and setting up a slug-fest between the two to decide it.

Lap after lap Belden and Cook ran side-by-side and inches apart, never touching, with Cook making the winning pass with 2-laps to go. When the pair came under the checkers Kevan Cook and Bret Belden were separated by only 0.283 of a second. Chad Homan, Jason Parkhurst and AJ Kingsley finished third through fifth.

In the 15-lap E&V Energy Novice Sportsman feature, Kearra Backus would grab the lead at the drop of the green setting the early pace out front.

Backus would lead until 3-laps to go when she and Tyler Murray made racing contact handing the lead to Murray. Once in the lead, Murray, in just his second ever start in a Novice Sportsman at the Fulton Speedway, went on to the win. Kearra Backus, Jake Davis, Quinn Wallis and Robert Gage finished second through fifth.

A special thank you goes out to Burdick Ford out of Central Square for their weekly Jr. Fan Club Bike Giveaway.