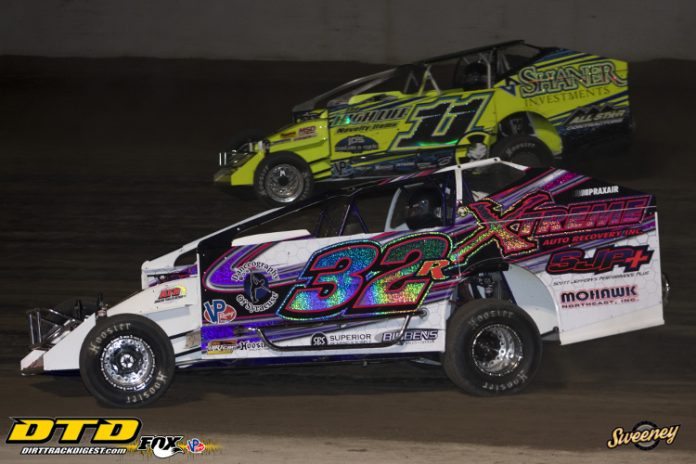 FULTON, NY – Ronnie Davis III has had numerous big weekends in the Sportsman ranks, but this weekend trumped them all. Following an impressive 15th to 4th run in his 358 against the Big Blocks at Brewerton on Friday night, Davis claimed his first win in the Modified ranks at Fulton the next night.

Larry Welling jumped out in front of the 358 Modified field for the 35-lap main, but surrendered the top spot to Tyler Meeks after just two circuits. Meeks went to work on the cushion and ran steady over Mike Bowman, who got around Welling soon after Meeks did. Following them in the early stages was a duo of 358 rookies in Ronnie Davis III and Todd Root.

The top four remained close over the first half of the race, with Meeks’ lead never extending past 6 or 7 car lengths. What lead he had really shrunk on lap 17 as Nick Joy spun to bring out the lone caution of the race. On the restart, Meeks returned to his comfortable line on the cushion, but Davis was able to roll the bottom around Bowman. From there, Davis went chasing after Meeks.

For a while, it seemed like Tyler Meeks was going to run away and hide, as Davis faded to about two seconds back after hopping the cushion on lap 22. Davis wouldn’t stay down for long, as he then chomped away at Meeks’ lead at a rapid pace. By lap 27, Davis was all over Meeks and ready to pounce, which he did with a slide job entering turn three. Davis didn’t clear Meeks with his slider, but it was enough to draw even down the frontstretch. Running the same low line he used to pass Bowman for second, Davis completed the move for the lead in turns one and two.


Tyler Meeks hung tough for the next few laps, but couldn’t match Ronnie Davis III’s pace. When the checkered flag flew after 35 fast laps, it was Davis winning his first ever Modified win over Meeks, Mike Bowman, Larry Wight, and Jordan McCreadie.

“Oh, this is amazing, I’m speechless,” the ecstatic Davis said. “I figured we’d struggle a little bit getting used to the car, and the more seat time I get in it the more and more I get comfortable. It’s just so much more fun than a Sportsman.”

While Davis is a rookie in the division, Tyler Meeks doesn’t have much more experience. The north country driver moved up last year and is one of the new drivers brought in by the switch to 358 motors at Fulton.

“Meeks was really good on the top, I went up there and tried it a couple of laps and it just wasn’t for me,” Davis noted. “I had to figure something out. I got a good run off the bottom and was able to slide up in front of him. The whole top five was really tough tonight.”

Former Late Model champion Chris Fleming seemed to have everything going his way the first half of the Late Model feature, but only for the first half. A lap 11 flat tire handed the lead over to Chad Homan, a lead Homan never relinquished as he ran off to his first checkered of the year at the track.

Former Modified hotshoe Scott Prentice looked to be well on his way to a return to victory lane in the first Sportsman feature, but a late charge by Jackson Gill thwarted any plan. After a hard fought battle for the last eight or so laps, Gill notched his second win in a row at Fulton.

Richie Riggs sent out a statement early in the second feature that he wanted his first Sportsman win tonight, opening up a full straightaway lead in the first half of the race. After a couple of cautions just past the halfway mark, Riggs fended off the challenges of Tye Scott Rood and Kevin Root, but Root began applying hard pressure to Riggs after getting past Rood for second. Root briefly nosed out in front a couple of times, but Riggs fought back. However, Root took over the lead for good on lap 21 and rolled to the feature win.