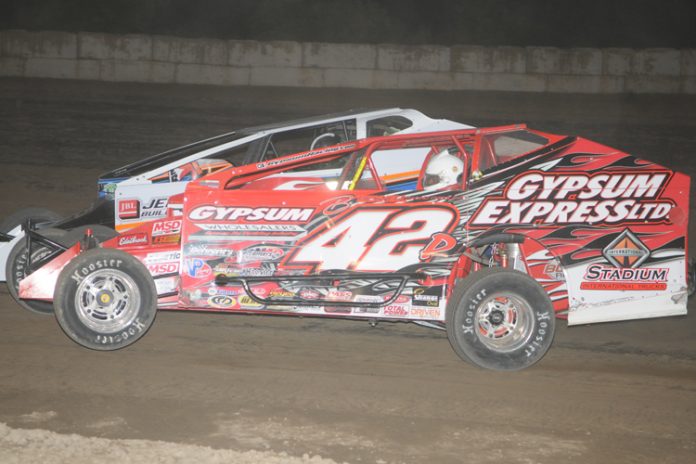 FULTON, NY – July 13, 2013, that was the date of Pat Ward’s last win at the Fulton Speedway. Not any more.  The Genoa, N.Y., driver finally returned to Victory Lane on Saturday night.

“The track was a lot more how I like it,” Ward noted. “It was dry and slick, but we were way too tight. We were just good enough and the bottom was the place to be. You just had to be right around the yuke tires on the bottom.”

The 358 Modified feature got off to a rather rough start, with a trio of cautions in the opening two laps. Drivers like last week’s winner Ronnie Davis III and Billy Whittaker now had to start from the back, and Jordan McCreadie’s night was ended. When it all settled, Larry Welling found himself in the lead, chased by Bobby Harrington and Pat Ward. Some drivers benefitted from the early carnage, such as Larry Wight, who was up to sixth just three laps into the race.

Pat Ward built momentum up top and slid around the bottom-dwelling Herrington and Welling to take the lead on lap 7. Herrington then moved past Welling for second, but would quickly find more red car company in Larry Wight. Using the same lane as his teammate, Wight rolled the high road around Herrington for the runner up spot with 14 laps in the record books. From there, Wight seemed poised for another win as he rapidly chomped into Ward’s lead.

Tim Sears Jr., who won on opening night, slotted into third on lap 19, but all eyes were up front as Wight had caught Ward. Wight got his first taste of the lead on lap 20, nosing out in front of Ward for a moment, but Ward held on. However, Ward could only hold on for so long, as Wight jumped out in front at the line to lead lap 21.

While Ward and Wight were still side by side, they reached the tail of the field. Wight didn’t have much luck with lapped traffic and was boxed in up top, allowing Ward to regain the lead on lap 24. Ward now had all the momentum on his side and begun to pull away from Wight, but Sears was closing on both leaders.

Tim Sears Jr. snuck under Wight with seven laps to go for second, now locking his sights on Ward. Slowly but surely, Sears closed, drawing within a handful of car lengths coming to the white flag.

Speaking of the white flag, that’s when Pat Ward caught lapped traffic, and that traffic was running his groove. This allowed Sears to close very fast, but it wasn’t enough, as Pat Ward claimed his first Modified win at Fulton since July 2013.

“Lapped traffic definitely wasn’t cutting us any break,” said Ward of his battles. “When Larry got to the outside I thought I would be okay if I just kept him out there in the dust. Then, Timmy (Sears) is always real good on the bottom. The 21 got us pretty boxed in at the end, but I didn’t dare go high and let Timmy fill that hole.”

Tim Sears Jr. chased in second, just 1/10th of a second back at the end, with Larry Wight, Mike Bowman, and Bobby Herrington rounding out the top five.

Jordan Thomas ran past Denny Peebles early in the 25-lap Patriot Sprint Tour event, holding a steady but rather slim lead for the first half of the feature. Peebles was making a run at Thomas for the top spot on lap 12, but a broken front end sent him to the infield. This put Dylan Westbrook in second, and the young Canadian was ready to pounce when the caution flew with 15 laps completed.

Westbrook slid around the top of Thomas for the lead on the restart and appeared to be running away, but Thomas flipped a switch with a handful of laps left and begun to hunt down Westbrook. Most of the field had migrated to the bottom, including the leaders, and Westbrook reached lapped traffic coming to the white flag. Thomas went to the cushion entering turn one, getting a massive run on Westbrook down the backstretch. Thomas crossed over Westbrook, with Thomas drawing even entering turn three. With Thomas having the preferred bottom, he completed the pass and beat Westbrook to the line by a carlength.

Sportsman competition saw another nice field of 58 cars split into two features. In race #1, it was Wade Chrisman rim-riding the far outside of the speedway to perfection, taking the lead around halfway and cruising to the win over Chris Mackey and Matt Janczuk. The second feature was Alan Fink’s show, with the exception of the final lap. Tony Finch got under and cleared Fink coming to the white flag, but Fink went from the top to the bottom to muscle under Finch entering turn one to regain the lead and the win.

The Late Model 20-lapper was a downright brawl between Kevan Cook and Sean Beardsley. The pair ran door to door for much of the feature, with Beardsley up top and Cook down low. The pair traded a little bit of vinyl in the closing laps, but when the dust settled, it was Cook beating Beardsley by most of a car length in the thriller of a race.

Chris Bonoffski, no stranger to 4-Cylinder victory lane at Fulton, ran away and hid with the Novice Sportsman feature, taking the win over Addison Bowman.