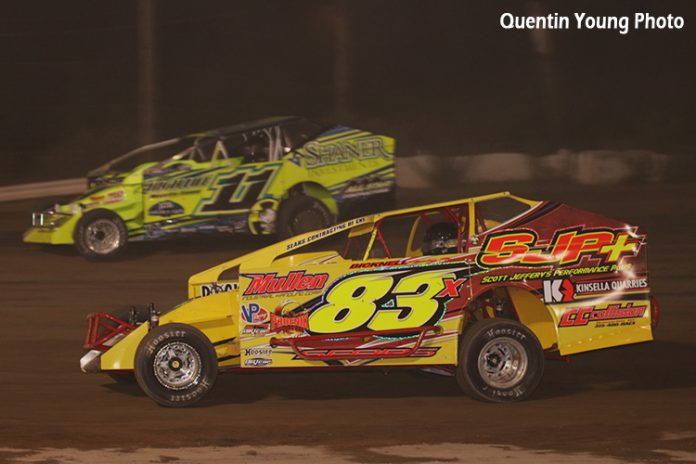 FULTON, NY – Another night of Fulton action, and another wild battle for the Modified victory. This week, Tim Sears Jr. came out on top of a yellow car brawl for the checkered.

Small-block Modified rookie Todd Root took full advantage of his front row starting spot, jumping out to a monster lead over Phil Vigneri in the opening circuits. In just five laps, Root’s lead had grown to an entire straightaway and wasn’t stopping there.

Vigneri soon felt the pressure of two northerners in Jordan McCreadie and Bobby Herrington. The three battled for second, with McCreadie grabbing the spot on lap 11. However, he was nearly half a lap behind Root.

The caution waived on lap 12 for a spinning Austin Murphy, erasing the massive advantage had by Root. McCreadie got a rocket restart, beating Root to turn one and briefly clearing for the lead, but Root floored it on the cushion and drove back by. Glenn Forward’s machine halted one lap later, giving J-Mac another chance.

On the restart, Billy Whittaker slid around the top of McCreadie for the runner up position. The race suddenly wasn’t so fun for McCreadie, as by halfway Bobby Herrington and Tim Sears Jr. had also passed by. Todd Root now had a whole new cast of characters chasing him.

Lapped traffic was heavy and often for Root. By lap 25, Whittaker had closed fast and seemed poised to take a shot at Root, but Root cleared some cars and put some distance back in between himself and the field. Behind the top two, Herrington, Sears, and Larry Wight scrambled for third, with Tim Sears Jr. taking the spot with 28 circuits completed.

One lap later, Sears darted under Whittaker for second and slammed the door exiting turn two. With six laps remaining on the scoreboard, Sears went hunting for a Root and a checkered flag.

Lap after lap, Sears closed in on Root, who was searching for his first ever 358-Modified win. Root remained married to the cushion, while Sears was chugging hard along the inside. With two laps left, Sears drew even with Root off of turn two, completing the pass coming to the white flag.

A lap later, it was Tim Sears Jr. grabbing his second Fulton checkered of the year.

“Wins here are always special, but those hard charges at the end are always awesome,” the elated Sears said. “I know Todd is disappointed, but he’ll have his time. To win on opening night and get another just four weeks later is really awesome.”

Root crossed the line in second with Wight, Whittaker, and Herrington completing the top five.

Corey Barker held off a high flying Nick Krause in the caution-filled first Sportsman event on the evening, running inches from the inside tractor tires lap after lap. Mark Yorker thoroughly dominated the second event, using the same line as Barker to motor away from the field.

Sean Beardsley was victorious in a wild battle with Jason Parkhurst in the Laye Model 20-lap main, taking his first win of the season. Jake Davis, brother of 358-Modified winner Ronnie Davis III, held off Quinn Wallis by inches to win the Novice Sportsman event.