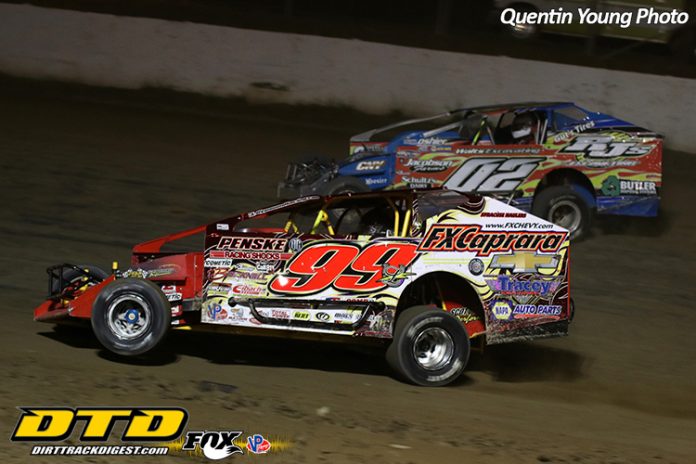 FULTON, NY – Larry Wight came out on top of a duel with Bobby Herrington and scored the Fulton Speedway 358-Modified victory. The win comes at a crucial time, as Wight now holds an 11-point lead entering next week’s season finale over Tim Sears Jr.

By lap twelve, Herrington had reached the back bumper of Bellinger and was not in the mood to waste time, making the pass for the lead as soon as he caught Bellinger. Wight wasn’t far behind, as the current points leader slipped under Bellinger for second two laps later. Initially, Bellinger and fourth running Pat Ward didn’t go away easily, but by lap 20, the top two of Wight and Herrington had ran away.

Wight was ready to pounce on Herrington with any little mistake by the Ontario resident, and Herrington slipped off the bottom of turn four on lap 22, opening the door for Wight. Both drivers wanted the top in turn one, so Wight shot a slider on Herrington to grab the lead. Herrington wasn’t giving up without a fight, even being scored the leader on lap 24, but ultimately Wight broke free. Once securely out front, Wight quickly established a solid advantage.

As the laps wound down, Wight seemed well on his way to another win, but with two to go, the yellow flew as DJ Forbes found himself backwards in his Modified debut. Wight got a good restart, but a second yellow on the last lap forced another try. Once more, Wight got a good launch, and Larry Wight cruised to his second Fulton Speedway victory of the season. Bobby Herrington crossed in second, with Tim Sears Jr. grabbing third at the line in a three-wide fight with fourth finisher Ron Davis III and fifth place Pat Ward. The win was Wight’s first since May, and grows his still small points lead heading into the season finale.

“The small blocks really leveled the playing field out,” Wight said. “You have to get lucky sometimes, catch traffic at the right time, and hope the track has two lanes. Tonight the track was beautiful, and we were able to move around enough to get up through. I knew Bobby (Herrington) was going into three too hot and missing the bottom, so I knew if I could just get a nose under him, we’d be able to beat him into one and put a slide on him.”

Scott Prentice’s car was destroyed last week, first turned into the outside wall at maximum speed then hit by various others. However, the team clawed to get back, and Prentice grabbed the lead early in the first Sportsman main event. Jackson Gill gave Prentice all the challenge he could want, but it was Scott Prentice going from the worst to the win in Sportsman feature one. Nate Higgins started up front in the second Sportsman event, dominating the entire way and never being challenged en route to his first of the year.

Tim Sears Jr. has not ran a crate Late Model regularly since 2014, but has had the chance to drive an AJ Kingsley entry the past three weeks. After being quick the first two tries, Sears came out on top of a long battle with Dale Caswell to pick up career Late Model win #19 at Fulton. Jake Davis had his way with the Novice Sportsman field, leading all 15 laps uncontested for another victory.