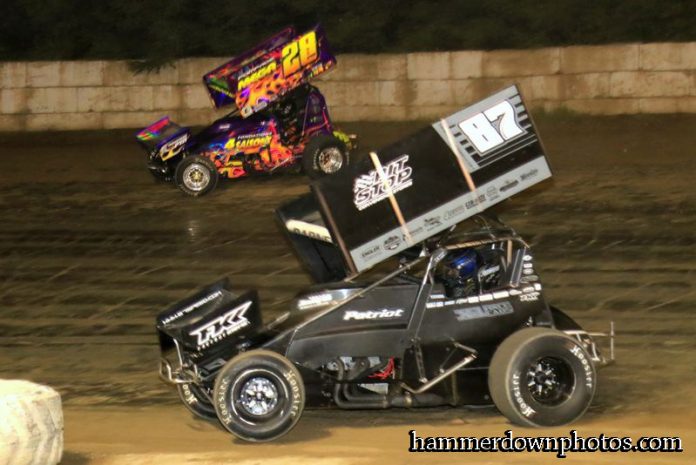 FULTON, NY – Jason Barney started the season red hot with the Lucas Oil Empire Super Sprints.  He won two of the first three feature events.  As the summer hit things went south for the Brewerton, N.Y., driver.  He’s struggled trying to find the speed that got him wins early in the season.

Saturday night at the Fulton Speedway, Barney got his mojo back.  Barney won the 25-lap A-Main in impressive fashion charging from third on a late restart to the lead.  He then battled multi-time series champion Steve Poirier for the win.  Barney just beat Poirier to the line for the $2,000 payday and the much-needed confidence boost.

“This is pretty nuts,” said an emotional Barney in victory lane.  “We gave one away last week in Granby on the last lap.  I didn’t sleep at all this week.  I really messed up last night and put my favorite car in the frontstretch wall.  I slept about five minutes.  I was just disappointed in myself.  I didn’t think I could win races anymore.  It creeps in; it’s crazy.  We have awesome race cars and an awesome race team.  I’m just really happy to get a win.  It was much needed.”

Jonathan Preston was the last to draw, but he started on the pole alongside Poirier for the green.  Poirier wrestled the lead from him on the opening circuit.  Preston battled hard and on lap five was able to go by Poirier in turns three and four to take his shot at the front.

On the next lap, Davie Franek made it a three car race for the number one position.  Preston led with Franek in the mix along with Poirier.  Preston continued to keep his No. 22 on top of the field.

Traffic appeared for Preston just before the race reached the halfway point.  Luckily for Preston, his line on the top was open nearly all the way around the track as slower cars were focused on running the middle and the bottom of the track.

With Preston and Poirier solidified out front, Barney was steady throughout.  He was methodical on the bottom reaching the top five at halfway before taking over third on lap 19.  He still had some distance to make up on the top two.

His break came on lap 21.  The only caution of the race was drawn by a spinning Ryan Harrison in turn four.  He came to a stop setting up a restart with Preston and Poirier on the front row and Barney lining up on the bottom in third.

Preston elected to refire from the outside lane.  Poirier got an excellent start pulling even with Preston going into turn one.  This allowed him to pull a slide job through turn two in order to briefly take the lead.  As the top two went high, Barney went low and drove by both drivers down the backstretch.

Barney led lap 22 at the line, but Poirier wasn’t done.  Poirier came back at Barney on the high-side of turns three and four on the next lap and just inched in front at the line.

Barney didn’t give up on the bottom, he stayed in his line with Poirier powering around the top.  They came to white flag right together once again with Barney low and Poirier next to him on the outside.

The final lap was going to determine the winner.  Barney continued catching the moisture on the bottom while Poirier had his right rear Hoosier Tire against the cushion.  They were nearly even coming off of turn two.

Barney dove low through and four with Poirier trying to carry momentum around him on the top. As they came off the corner Barney slipped up in front of Poirier slowing his pace just enough that he was able to grab the checkers.

“I knew I could be good on the bottom, but he was good running three and four on the top,” stated Barney.  “I didn’t know what to do.  I didn’t really run up there.  If I enter up there, he’s just going to slide me.  So, I figured I better go up, then go down and go back up again.  That was my only chance.  I still thought he was going to get me.”

Poirier, the eight-time and defending series champion, matched his best finish of the season crossing the line in second.  It was a great race at the front.  Poirier just needed a little bit more to get by Barney on the final lap.

“That was fun,” said Poirier of the race with Barney.  “I gave it all I had.  We’ve had a tough year.  We haven’t won an ESS race so far.  I was doing all I could.  I thought when I got by Jonathan I had to protect the outside.  I got a bit too high and forced the issue a little bit there.  Then I saw Jason on the inside.  I tried some different things and raced him as hard as I could.  That was a fun race.”

After sweeping the action on Friday, Preston had to settle for third on this night after Barney and Poirier drove by on the final restart.  He felt like was in trouble when the yellow came out and that proved to be the difference maker as he had a comfortable lead prior to the restart.

“The car was really good in clean air and traffic,” cited Preston.  “I was just on cruise control out there.  I didn’t want a restart.  I knew he was going to pull me on a restart.  It just doesn’t take off, but what can you do.”

Billy VanInwegen rallied late to get up to fourth with Chuck Hebing having another solid night to complete the top five.