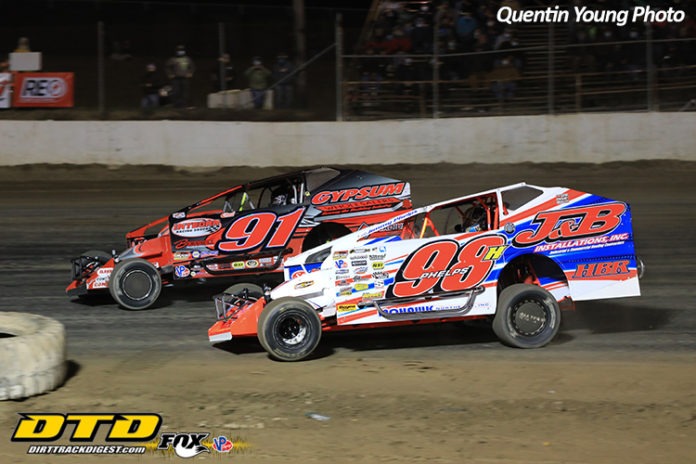 “The Baldwinsville Bandit” Jimmy Phelps pulled out the brooms and took home over $10,000 in prize money after winning both the Big Block Modified Super DIRTcar Series and the 358 Small Block Modifieds during night three of DIRTcar Racing’s OktoberFAST at the Fulton Speedway Thursday night.

“Our family has a lot of history with Fulton and this place is very special to us”, Phelps said after sweeping both the Modified features. “I don’t know if the emotions are starting to set in now or what, but what we did tonight is pretty special”, Phelps added.

The 60-lap Big-Block Modified Super DIRTcar Series feature was brought to the green flag by Phelps and Chris Hile, with Phelps getting the advantage. “The Jet” Brett Hearn would bring out the first caution on lap three as he slowed entering turn three and would not return to the event. The ensuing restart would see Phelps leading Hile, Billy Decker, Mike 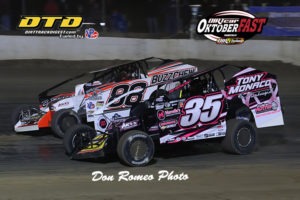 Mahaney, and Stewart Friesen. Mahaney would get around Hile to move into second on lap 20, as Friesen was able to get past Decker to move into fourth. Before the halfway mark, Friesen would challenge Hile for third and a battle for fifth started to shape up between Decker, and Mat Williamson. Williamson would enter the top five on lap 25. As the leaders entered heavier lap traffic just past the halfway mark, Mahaney would reel in Phelps, with Friesen just behind. As the race entered its final ten circuits, Friesen would start to challenge Mahaney, but Mahaney would be able to pull away late. Jimmy Phelps would lead all 60 laps to get the win ahead of Mahaney, Friesen, Williamson, and Larry Wight.

“What a night. It does not get much better than this”, Phelps said in victory lane. “We were fortunate to get good redraws, my daughter drew the last one”, Phelps added. “I kind of lost my rhythm in lap traffic and lost it and without a caution, we couldn’t race with him but congrats to Jimmy and their team”, stated runner-up finisher Mike Mahaney. “We tried to putt-putt our way around the bottom with the Ute tires and running in the slick the tires sealed up”, commented podium finisher Stewart Friesen. “We tried running the top a couple of times, but the bottom was where it worked best”, Friesen added.

Jimmy Phelps would be on the pole for the 40-lap feature event for the 358 Modifieds with “The Franklin Flyer” Billy Decker alongside. The two veterans were the class of the field early on, as they would pull away from the field. Andy Bachetti would race in third with Ronnie Johnson, and Stewart Friesen racing in the top five. Phelps would encounter lap traffic on lap 14 and just six laps later, the lone caution of the event would fly as Jesse Mueller spun in turn two. On the restart, Tim Sears Jr would get around Friesen, Mike Mahaney, and Bachetti. As the race went along, Phelps would continue to be strong and would pull away from Decker, with Sears running in third.  Phelps would get the win over Decker and Sears, with Mike Mahaney, and Stewart Friesen completing the top five.

“The car rolled really good,” Phelps said. “When we hit lap traffic, I raced them better in the second run than we did in the first run”, Phelps added. Runner-up finisher Billy Decker said that his car, like Phelps, rolled well and was good all night. “The car fired off well, but we just couldn’t finish the deal”, Decker said. “We needed a couple more restarts to have a shot at Jimmy and Billy”, commented third-place finisher Tim Sears Jr.

235 entries took part in night three of DIRTcar Racing’s OktoberFAST. Night four of OktoberFAST will continue with the Big Blocks, Small Blocks, and Sportsman at the Can-Am Speedway in LaFargeville.