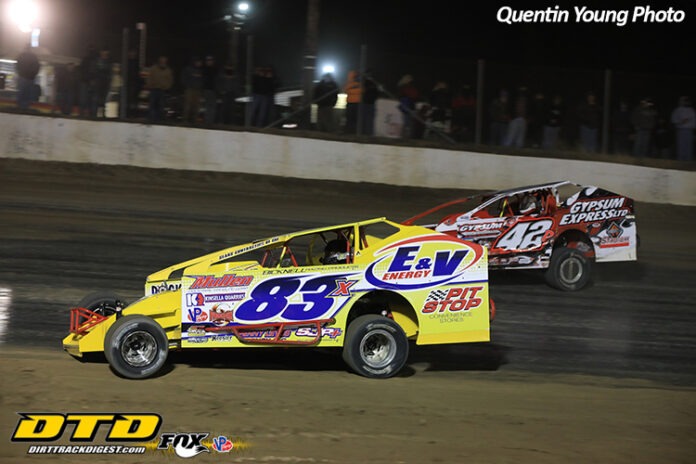 BALDWINSVILLE, NY – Race fans and race teams, get ready. Fulton Speedway will help kick Covid to the curb with a full season of racing beginning May 1. Following a 2020 that saw just one full racing event and six practices due to COVID-19 restrictions, a busy and diverse schedule is planned at the famed Fulton oval capped off by the 35th Outlaw 200 Weekend on October 1 and 2.

Weekly racing at Fulton Speedway will again be headlined by the Tracey Road Equipment DIRTcar 358-Modifieds. With multiple graduates from the sportsman ranks and growth from around New York, a large field of regulars is expected. Fulton’s highly competitive Dot Foods DIRTcar Sportsman will again be an anchor support class, joining the Billy Whittaker Cars and Trux Late Models and E & V Energy Novice Sportsman as weekly fixtures.

Special appearances by the Lucas Oil ESS Sprint Cars will dot the summer racing slate with three holiday weekend appearances (May 29, July 3 and September 4), along with the return of the wildly popular World-Famous Trailer Race (July 31) and a pair of King’s Smash ‘Em Crash ‘Em Demolition Derbies (May 15 and August 28). The zany H2No Boat Race will return after a several year absence on June 19.

While much of 2020 is rightfully in the rearview mirror, the speedway will carry over the Tuesday Test and Tune events with once-a-month open practices kicking off on April 27. With a single date in May, June, July and August being made available for several hours of on track testing.

Hobby Stocks will hit the high banks with a pair of specials, first on July 31 and then as part of Outlaw Weekend, in anticipation of being a weekly class in 2022. Rules for these events plus the 2022 season will be available on www.fultonspeedway.com but will mirror those of other area tracks.

“We muddled through last year and at least got some cars on the track a few times. While it was frustrating, we chose to err on the side of caution”, said Cory Reed, Track GM, “We expect to be in full song this season kicking off May 1. We have an exciting season planned and look forward to bringing fans back to Fulton.”

News and information will be posted on www.fultonspeedway.com and the Fulton Speedway Facebook and Twitter pages as it becomes available. Advertising and promotional opportunities can be discussed by calling (315) 638-4056 or by email cory@brewertonspeedway.com.