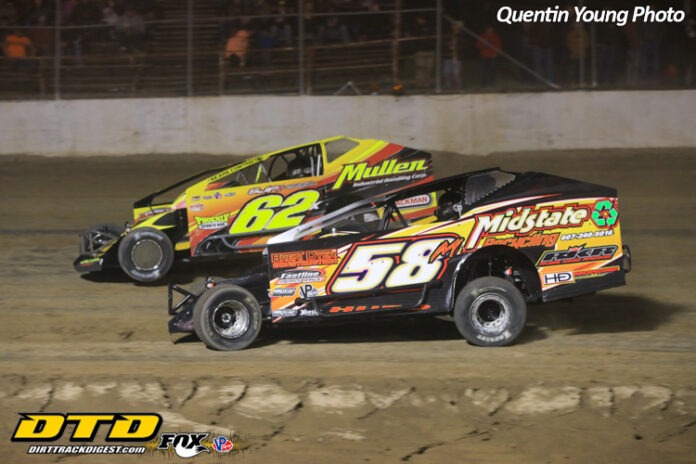 FULTON, NY – Excitement was high Saturday night at the Fulton Speedway as fans and race-teams were welcomed back to their Saturday night home after a season away to kick off the 2021 campaign.

In the Tracey Road Equipment DIRTcar Modifieds, Tim Sears Jr. made a statement that he was going to be one of the top contenders to put their name in the record book at season end as Track Champion at the speedway.

Jimmy Phelps and AJ Kingsley brought the stout Modified field down to the green with Phelps grabbing the early advantage in the 35-lap feature.

At lap 5 Phelps and Tim Sears Jr. were putting on a show battling side-by-side on the entire speedway with Ron Davis III, Pat Ward and Dave Marcuccilli running third through fifth.

Sears pulled a power move off the bottom groove of the speedway to be scored the new leader with 10 laps showing on the scoring tower with Davis, Ward and Marcuccilli still racing hard in the top-five.

At the halfway point Sears was in heavy traffic and was able to put cars between himself and Phelps who was now in a battle with Davis. Ward and Marcuccilli were still in contention for finishes in the top-five to start out the points season.

Over the second half of the feature and no yellows to slow the field Tim Sears Jr. cruised to the win lapping up to seventh place. Ron Davis III, Jimmy Phelps, Pat Ward and Larry Wight who started deep in the field completed the top-five.

The yellow would wave on lap 5 and would see Sobotka move into second on the restart then into the lead two laps later.

On lap 10 Meeks would drive off the bottom of the speedway and retake the lead with Mackey, Yorker and Wahdan showing third through fifth.

At the halfway mark Meeks still led with Mackey closing the gap. Sobotka, Will Shields and Yorker were still in the top-five.

Over the final laps Meeks held off Mackey and Sobotka for the win. Shields and Yorker completed the top five.

In the second 25-lap feature Mike Fowler would set the pace until Matt Janczuk would go from third to the lead on a lap 3 restart.

The most serious incident of the night came on lap 10 when Riley Rogala would roll over in turns three and four. He climbed out of his car unhurt.

Late in the going it looked like Janczuk would go to victory lane, but Quinn Wallis had other ideas driving into the lead on lap 24 to take the popular win. Janczuk, Rick Miller, Amy Holland and Cody Manitta finished second through fifth.

The 20-lap Billy Whittaker Cars & Trux RUSH Late Model feature would see Chad Homan jump out to the lead at the drop of the green and would open a half a straightaway lead with Bret Belden, Max Hill, Chris Fleming and Sean Beardsley battling for top-five spots.
At halfway Homan still led with Fleming second, trying to cut into Homan’s lead with Belden, Hill and Beardsley still racing in the top-five.

The yellow would wave on lap 14 when Fleming and Belden were trying to get by a lapped car and racing contact was made that would see Fleming hard into the back straight wall ending his night.

When the green came back out there was no stopping Homan as he would cruise to the win. Beardsley, Belden, Alan Chapman and Todd Chapman finished second through fifth.

Jacob Dupra would lead every lap of the 15-lap E&V Energy Novice Sportsman feature. The win was not easy as he had to hold off strong challenges from David Hackett most of the race, winning by a slim 0.344 of a second at the checkers. Teddy Clayton, Chris Crump and Pat Nolan finished third through fifth.

Adult grandstand admission is $15 with everyone 18 years & under admitted free. Pit admission is $35. Grandstands will open at 5:00 pm with racing at 7:00 pm.

Any questions you might have and for marketing opportunities please contact Cory Reed at (315) 593-6531 or cory@fultonspeedway.com. For all the latest news go to www.fultonspeedway.com and like the track social media pages.