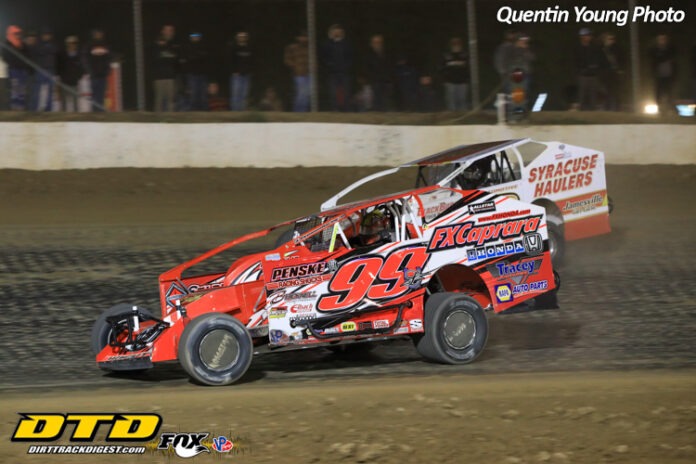 FULTON, NY – Storms sidelined many New York race tracks this weekend, as wild weather patterns chilled temperatures and brought rain to much of the state. However, Fulton Speedway finally get its first ‘Lightning’ strike on Saturday night, as Larry Wight drove to his first 358-Modified win of the year from deep in the field.

35 358-Modifieds rolled into the Fulton Speedway on Saturday night, and 31 of them took the green flag. The front row of Justin Crisafulli and Michael Stanton quickly did battle, with Crisafulli temporarily prevailing for the early race lead. However, a short yellow flag bunched the field back up.

On the restart, Stanton powered around Crisafulli and work the top side of the Fulton Speedway to his advantage. Stanton drove away from the field for the first half of the feature, pulling approximately a straight-away advantage over Crisafulli and Roy Bresnahan. Bresnahan had worked his way into third while Stanton led and quickly make work of Crisafulli, inheriting second and attempting to chase down Stanton.

The race was shaken up when a yellow flag flew for Tim Sears Jr. The driver of the No. 62s has dominated the start of the season at Fulton Speedway, taking the first three features of the year consecutively. However, a broken front end ended that streak at three, and Sears Jr. was towed off the speedway.

On the ensuing restart, Bresnahan made quick work of Stanton and took a considerable lead over the field for the time being. Behind him, Larry Wight was getting into position to challenge Bresnahan. Wight passed Stanton without delay, leaving Wight with open track to chase down Bresnahan.

Just behind Wight, Mat Williamson was working double-time. The Cocco-Wendt Racing No. 6 with Williamson behind the wheel had worked its way up into the top ten from a 19th place starting spot, and Williamson was far from finished. ‘Money Mat’ drove past Dylan Zacharias and Pat Ward, who both had passed Stanton to move into 4th and 5th place, which is where Zacharias and Ward finished. Williamson now had open track to run down the duo of Bresnahan and Wight out front.

Wight caught and passed Bresnahan late in the race, with Williamson continuing to pedal his way to the front. A few laps after Wight passed Bresnahan, Williamson did the same, moving into 2nd with only Wight ahead. Heavy lap traffic was beginning to cover all lanes of the Fulton Speedway, locking Wight down on the bottom and Williamson on the top. Williamson had a few peeks at a move for the lead in the last ten laps, but Wight was using the bite on the bottom side to great success, as he’d take the win over Williamson by 3 car lengths at the checkered flag.

“We’ve been struggling, especially in the beginning of the year,” said Wight. “We think we’ve started to finally figure things out. We had a DMI rear end in the car that just did not seem to be running right. We put a brand-new Winters rear end in the car tonight and it woke the whole car right up. I think that is what we’ve been missing. Now we can start tuning the car setup-wise.”

Wight, a driver usually known for finding success in the high groove of tracks, used the low side of the Fulton Speedway to his advantage.

“The bottom was definitely dominant for the Modifieds,” said Wight. “There was a lot of brown down there. Once you could get the car slowed down enough to get down there you could really make a lot of time. The new clay we put on during the lockdown is holding up good, we have a few spots to work on but it was a good track tonight.”

Williamson’s Saturday was originally not going to be at the Fulton Speedway.

“We were going to run Lebanon Valley this Saturday, but there was a bit of confusion regarding which car I would drive there this weekend,” said Williamson. “I asked John Cocco if he wanted to go to Fulton with this car, and he said yes.”

The Cocco-Wendt Racing No. 6 is Williamson’s weekly 358-Modified ride that he races predominantly at the Ransomville Speedway.

“We figured we would be decently competitive here,” said Williamson. “I feel like we may have had something for Larry if I could have surprised him on the top. We had a good car tonight. Fulton is one of my favorite places to race. You can pretty much find speed anywhere on the track.”

Both drivers are looking to carry this momentum into more than the weekly racing at Fulton Speedway. Both drivers will attend the Weedsport Speedway for the Super DIRTCar Series Heroes Remembered 100.

Next week at Fulton Speedway is a regular program plus ‘Three-Wide Night’, where the feature events will have a three-wide initial start.