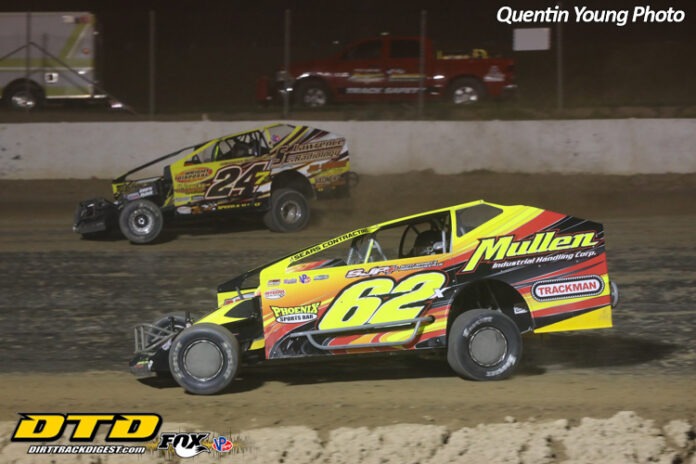 FULTON, NY – They say in racing the most important lap to lead is the final one. That is exactly what Tim Sears Jr. did Saturday night at the Fulton Speedway to earn his fourth feature win of the season.

In the 35-lap Tracey Road Equipment DIRTcar Modified feature, Ryan Richardson and Justin Crisafulli would lead early laps with racing two and three wide behind them.

The fastest car on the speedway was Ron Davis III who started in position 17. Davis would rip the top of the speedway, quickly passing cars and driving into the lead on lap 8.

Davis would bolt out to a four-second lead still using the top of the speedway while putting cars down a lap. While Davis was out front, the heavy hitters in the division were working their way to the front from their handicapping starting spots.

Yellow on lap 15 would erase Davis’s big lead and would put RJ Tresidder, Crisafulli, Richardson, and Nick Krause in the top-five for the restart.

On lap 21, Michael Maresca who started 18th and Tim Sears Jr. who started 16th moved into second and third and set their sights on Davis who still had a big lead.

Just when it looked like Davis would cruise to the win, the caution flag would wave on lap 31 when Dave Marcuccilli, who was in the top-five, suddenly slowed to a stop setting up a 4-lap battle to the finish between Davis, Sears and Maresca.

When the green came back out, Davis was on the topside of the speedway, as Sears went to the bottom as they raced side by side with Maresca waiting to pounce on any mistakes.

On the final lap Sears found the bite he needed to drive by Davis for the narrow win. Behind Tim Sears Jr. Ron Davis III, Michael Maresca was Corey Barker and Bob Henry to complete the top-five.

In the first 25-lap DOT Foods DIRTcar Sportsman feature, Richie Riggs would lead the opening 10 laps in a three-car battle for the lead with AJ Miller and Steve Marshall with Miller taking over the top-spot on lap 11.

With Miller cruising out-front, Austin Germinio was slowly cutting into Miller’s lead. With 5 laps to go Germinio caught Miller and would make the winning pass on lap 23 for the popular win. Behind Germinio and Miller was Tyler Corcoran, Richie Riggs and Amy Holland to complete the top-five.

The second 25-lap Sportsman feature would see Dorian Wahdan drive into the lead and would build up a lead of over 3 seconds by lap 10 with Kearra Backus, Tyler Murray, Joe Kline, and Robert Gage locked in a tight battle for second to fifth.

With 10 laps to go Wahdan still had a big lead over Joe Kline, Matt Janczuk who started 17, Backus and Gage.

A yellow on lap 18 would erase Wahdan’s big lead setting up a shootout to the checkers. On the restart, Janczuk would go from third to lead. The race was far from over with Janczuk and Kline racing side by side with the finish being decided by a drag race out of turn four coming to the checkers that would see Janczuk winning by a half a hood or 0.024 at the line.

On lap 6 Homan would take the lead, Fleming battled back retaking the lead one lap later.

Fleming, running the top of the speedway and Homan the bottom, they would battle side by side lap after lap. After seeing Homan to his inside more than once, Fleming moved from the top to the bottom. Once Fleming did that, he would grab his second feature win of the year at the speedway. Chad Homan, Max Hill, Sean Beardsley, and Bret Belden completed the top-five.

Jacob Dupra led every lap of the 15-lap E&V Energy Novice feature. The victory was not easy as he had to hold off heavy pressure from Brett Sears most of the race. Tommy D’Angelo, Tayvyn Marino, Pat Nolan and Brett Sears finished second through fifth.

The AmeriCU Mod Lites Mod Lites made their first appearance of the season. The 15-lap feature would see JJ Courcy grabbing the big win. Courcy would have to hold off the hottest driver in the division, Justin Williams by a slim 0.900 at the checkers. Tom Mackey, Joe Isabell, and Mike Mullen rounded out the top five.

This coming Saturday is one of the fan favorites on the schedule with the H2No Boat Race. Drivers tow boats around the track in a race format while attempting to smash other boats. Through all the carnage and mayhem all around the speedway the winner is decided by who is the last survivor with their boat still attached to their vehicle.

It will also be ‘Yellow Out’ Night encouraging everyone to wear yellow For Rhabdomyosarcoma & Childhood Cancer Awareness. Throughout the night there will be an auction, raffles and other activities. All money raised will stay in the area going to  Golisano Children’s Hospital in Syracuse, NY.

Any questions you might have about the 2021 racing season and for marketing opportunities, please contact Cory Reed at cory@fultonspeedway.com or call (315) 593-6531. For all the latest news visit www.fultonspeedway.com and like the speedway social media pages.