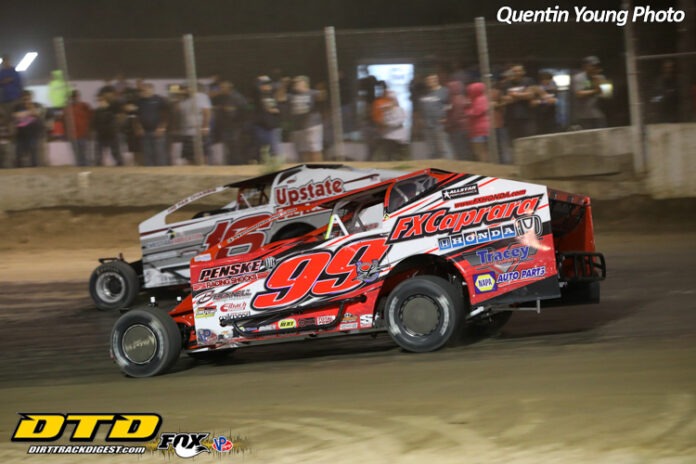 FULTON, NY – Saturday night at the Fulton Speedway a big field of cars greeted race fans and the action on the speedway did not disappoint on a weekend we celebrated America’s independence.

In the 35-lap Tracey Road Equipment DIRTcar 358 Modified feature, Joe Shields would lead the opening 2 laps before Marshall Hurd would take over the top-spot.

On lap 10 Hurd still showed the way but would soon have company from the fast-approaching Dave Marcuccilli who was blasting the top side of the speedway and then into the lead on lap 12.

At the halfway point Marcuccilli opened a half-a- straightaway lead over Hurd with Larry Wight from 13th, Shields and Richardson racing for third through fifth.


With 10 laps remaining Marcuccilli was putting cars down a lap holding a 2.7 second lead over Wight just before a yellow that Marcuccilli did not want to see lining up Wight next to him for the restart.

Lap 27 would see Wight drive into the lead and then would outdistance Marcuccilli for his second win of the year. Erick Rudolph, Ron Davis III and Pat Ward completed the top-five.

A big field of DOT Foods DIRTcar Sportsman signed into the pits setting up a pair of features starting 28 cars.

Willy Decker Jr. was the class of the field leading the entire distance finishing 3 seconds ahead of Mike Button. Amy Holland, Josh Amodio and Chris Mackey finished third through fifth.

In the second 25-lap feature, Jimmy Moyer and Wade Chrisman put on a show swapping the lead back and forth with the racing behind them two- and three-wide.

The winning move of the race came on lap 18. With Moyer running the bottom and Chrisman the topside, Andrew Buff saw the middle wide open and drove between them and into the lead in one move. Once out-front Buff would take the win, his first ever at the Fulton Speedway. Jack Meeks, Jimmy Moyer, Wade Chrisman and Chris Bonoffski finished second through fifth.

Over 30 cars signed into the pits for the Lucas Oil Empire Super Sprints CNY Speedweek.

In the 25-lap feature Paulie Colagiovanni would lead the opening 6 laps before fan favorite Jason Barney would drive into the lead and looked to pull away from the field after that.

The rest of the distance Barney was the class of the field winning by almost 4 seconds over Colagiovanni. Danny Varin, Shawn Donath and Larry Wight completed the top-five.

Jason Breezee would lead the first 4 laps of the 15-lap E&V Energy Novice Sportsman feature before Brett Sears made the winning pass on lap 5. Once out front he would outdistance Scott Kline, Paul DeRuyter, Buddy Lathley and Jason Breezee.

Any questions you might have and for marketing opportunities contact Cory Reed at (315) 593-6531 or cory@fultonspeedway.com. For all the latest, visit www.fultonspeedway.com and like the speedway social media pages.