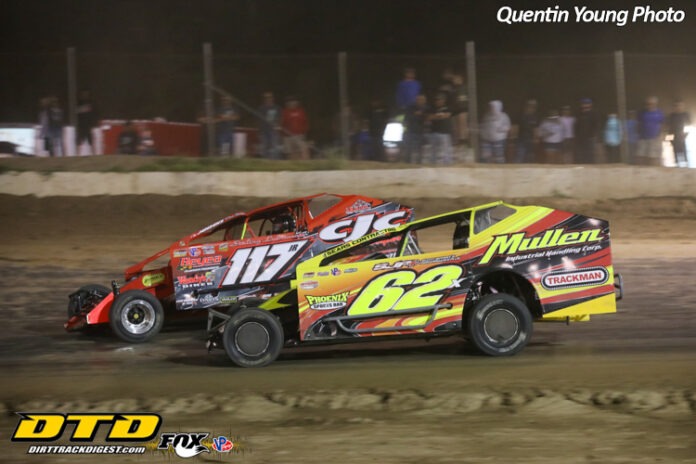 Sears would start the feature in 16th and quickly made his way to the front taking the lead on lap 11 from Mike Stanton Jr. Once out front and no yellows to slow the field, Sears would cruise to his fifth Fulton win by almost 4-seconds.

Jeff Taylor and Mike Stanton Jr. would bring the Tracey Road Equipment DIRTcar 358 Modified field down to the green with Stanton grabbing the lead in the 35-lap feature.

By lap 5 Stanton opened a five-car length advantage with Taylor, Jackson Gill, Jason Parkhurst and Chris Cunningham running under a blanket in the top-five.


A yellow on lap 8 would erase Stanton’s advantage and slow the two- and three-wide racing throughout the field.

On the restart Stanton would still show the way, but the car on the move was Tim Sears Jr. who would take the third spot when the green came back out, second on lap 10 and drove into the lead one lap later.

With 15 laps showing on the lap counter, Sears would open a straightaway lead as Parkhurst, Cunningham, Larry Wight from 15th and Bob Henry raced in the top-five.

With 10 laps remaining and no yellows to slow the field, Sears opened a 4 second lead while rapidly putting cars down a lap. You could have thrown a blanket over Parkhurst, Wight, and Henry with Ron Davis III just a couple car-lengths back in fifth.

Over the final laps there was no slowing down Sears as he would cruise into victory lane for his fifth win of the year at the speedway. Wight, Henry, Davis and Pat Ward would complete the top-five.

The first DOT Foods DIRTcar Sportsman 25-lap feature, Rick Miller would grab the early lead and by lap 5 was in a two-car breakaway with Dave Moyer. Tony Finch II, Jake Davis, and Kyle Devendorf slugged it out in the top-five.

On lap 10 Miller still led but had Moyer right on his back bumper waiting for any mistake. Finch, Davis and Devendorf were still in contention for the win or top-five finish.

After hounding Miller lap after lap, Moyer saw the opening he needed on lap 17 to drive under Miller and into the lead.

Once out-front, Dave Moyer would get great restarts after a couple late yellows and would drive right into Fulton Speedway victory lane for his first ever Sportsman win at the speedway. Jake Davis, Rick Miller, Amy Holland and Kyle Devendorf finished second through fifth.

In the second 25-lap Sportsman feature Matt Richardson would lead the first four-laps before Rachel Zacharias blasted into the lead as Josh Livingston, Tyler Murray and Stephen Marshall kept pace at the front of the field.

The yellow would wave on lap 9 with Murray driving into the lead and Jeff Prentice into second on the restart.

With 10 laps to go Murray held about a ten-car length advantage over Prentice as Marshall, Chris Mackey from 12th and Josh Livingston battled for third through fifth.

The race would stay green over the final laps with Tyler Murray parking the #34 in victory lane for the first time at the speedway. Jeff Prentice, points leader Chris Mackey, Steve Marshall and Josh Livingston completed the top-five.

Power Seal, Tarvia Seal, Dura Seal put up a $2,000 purse to bring together the ten best Brewerton Speedway & Fulton Speedway Sportsman for a Midseason challenge. In the elimination type format, the finals came down to Jeff Prentice and Quinn Wallis to settle it with Prentice taking the big win. Complete rundown is below in the results.

The 20-lap Billy Whittaker Cars & Trux RUSH Late Model feature would see Sean Beardsley set a quick pace out front at the drop of the green as he looked to quickly pull away from the rest of the field.

By lap 5 Beardsley would open a straightaway lead. You could have thrown a blanket over Kevan Cook, Chris Fleming, Harry Halliday and Chad Home battling for top-five spots.

Beardsley would open over a 3 second lead at the halfway point with Fleming, Cook, Homan and Halliday still running in the top-five.

With the rest of the race staying green, Sean Beardsley would cruise to his first win of the season. Chris Fleming, Chad Homan, Kevan Cook and Harry Halliday completed the top-five.

The E&V Energy Novice Sportsman feature would see Savannah Laflair lead the opening 10 laps when the caution would slow the field. Brett Sears would take advantage of the yellow and would drive into the lead on the restart.

Over the final laps there was no stopping Sears as he went under the checkers 2.8 seconds ahead of Teddy Clayton. Jason Breezee, Scott Kline and Tayvyn Marino finished third through fifth.

Have you always wanted to get on the Fulton Speedway and go fast? This Saturday will be your chance in the One-on-One Spectator “Grocery Getter’ Minivan & Station Wagon Races. To compete you need a street legal minivan or station wagon, valid driver’s license and helmet.

Any questions you might have and for marketing opportunities contact Cory Reed at (315) 593-6531 or cory@fultonspeedway.com. For all the latest go to www.fultonspeedway.com and like the speedway social media pages.