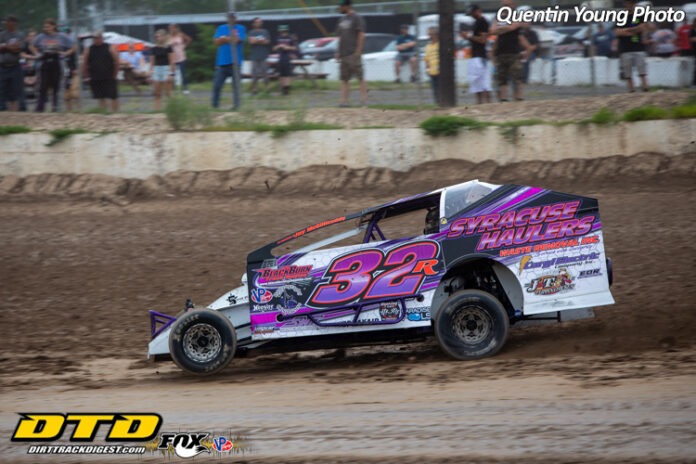 The 35-lap Modified feature would see 29 cars take the green flag with two- and three-wide racing the entire distance. Ron Davis III would take the lead at the halfway point, lap 18, and from there would never look back, taking his second win of the season and the new points leader.

Jeff Taylor would lead the opening 3 laps of the Modified feature before Jeff Sykes, who was fast on the topside, would blast into the lead.

On lap 10 Sykes, Todd Root, and Jackson Gill were in three-way battle at the front. Behind the lead fight would see Ron Davis III and Pat Ward in fourth and fifth and starting to gain on the leaders.

Sykes on lap 15 was still quick out front with Gill, Davis, Root and Ward still in contention in the top-five.

Davis would move into second and set his sights on Sykes and would drive under driving by Sykes on lap 18 to be scored the new leader.

With 10 laps left Davis was able to put 10-12 car lengths between himself and the rest of the top-five of Ward, four-time feature winner Tim Sears Jr., Gill and Larry Wight.

Over the remaining laps Davis was a man on a mission as he was never seriously challenged the rest of way, finishing two-seconds ahead of Tim Sears Jr.. Pat Ward, Larry Wight, and Jackson Gill completed the top-five.

The first 25-lap DOT Foods DIRTcar Sportsman feature would see Richie Riggs and Matt Kitts lead early laps until Austin Germinio, who was on rails running the top of the speedway, drove into the lead on lap 7.

Germinio would open a half a straightaway lead on lap 10. Riggs and Tyler Corcoran were in a tight fight for second and third with Rachael Zacharias and Joe Kline showing on the scoring tower.

Germinio would open a 3.6 second lead with 10 laps to go, and with no yellows the rest of the of the way, Austin Germinio would cruise to his second win of the year. Tyler Corcoran, Richie Riggs, Jimmy Moyer, and Rachel Zacharias finished second through fifth.

In the second 25-lap Sportsman feature, Rocky Grosso and Matt Richardson would lead laps in an unusual early yellow fever.

When the race hit lap 10, Richardson, Grosso, Chris Bonoffski, AJ Miller and Tony Finch II raced in a tight pack at the front of the field.

With 10 laps to go Grosso got a run to the low side of Ricardson and drove into the top-spot. Bonoffski, Miller, and points leader Chris Mackey from the 13th starting spot raced in third though fifth.

On lap 21 and with victory in sight for Grosso, something broke as he pulled into the infield ending his night.

When the race reached halfway, Homan was is total control with Chris Fleming chasing and looking for a way to cut into Homan’s lead. Belden, Kevan Cook and Max Hill raced for third through fifth.

Over the second half of the race Homan’s lead looked too large to overcome without a yellow flag to tighten the field up. Without a yellow, Fleming was able to run down and catch Homan but with 2 laps to go Fleming went hard into turn one and went around. Amazingly Fleming straightened the car out and didn’t lose a position on the speedway.

Homan drove away for his fifth Fulton win of the year. Chris Fleming, Bret Belden, Kevan Cook, and Harry Halliday completed the top-five.

Enough E&V Energy Novice Sportsman signed into pits to have a pair of features.

The second 15-lap feature would see Owen Kitts lead the opening lap when Dwight Nichols took over the lead. Nichols, and Savannah Laflair would have an exciting side-by-side race for several laps. The last handful of laps Nichols, Scott Kline would battle with Kline picking up the win. Mikey Wight made a late-race charge to finish second while Nichols, Laflair and Jason Doty completed the top-five.

Doug Williams would lead the opening 11 laps of the 15-lap AmeriCU Credit Union Mod Lite feature before Tom Mackey drove into the lead. Once in the lead Mackey would drive into victory lane for his first career win in the Mod Lites.

Next Saturday, July 31 the Fulton Speedway will close out the month of July with a huge show presented by Billy Whittaker Cars & Trux and Flood Drive Properties.

Right after hot laps the popular Midway Fan Fest will take place. Fans can get up close to all cars, talk with their favorite drivers and get autographs, driver giveaways and take pictures with your favorites who race on the ‘Highbanks’ of the Fulton Speedway.

After the racing it will be time for the wild and unpredictable carnage filled H2No Boat Race. It’s a race of survival to award the last competitor with their boat still attached to their vehicle.

Any questions you might have and for marketing opportunities contact Cory Reed at (315) 593-6531 or cory@fultonspeedway.com. For all the latest news go to www.fultonspeedway.com and like the speedway social media pages.