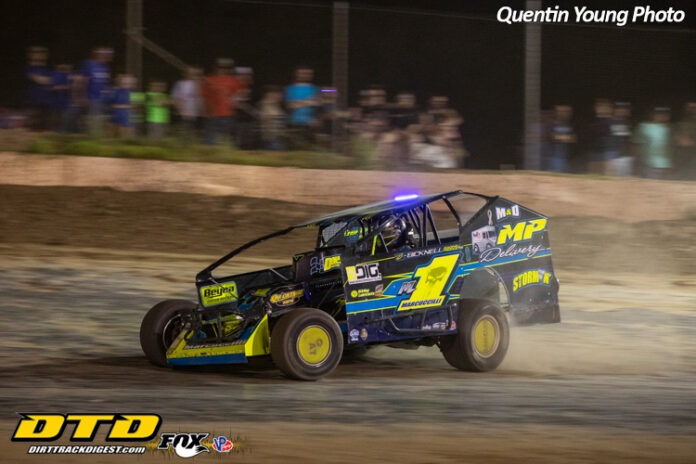 FULTON, NY – Saturday night at the Fulton Speedway was a night Dave Marcuccilli and his race team will be talking about for a long time as he swept a pair of 35-lap Tracey Road Equipment DIRTcar 358 Modified features on Ferris Mowers night.

In the first feature Marcuccilli would start 12th and would work his way into the top-five and then into second before the halfway point. When Marcuccilli moved into second, he quickly started to cut into Jeff Sykes’ big lead, running him down and making the winning pass on lap 18. Once out front Marcuccilli drove away from the field straight into victory lane.

Back on June 19th 7 laps were completed in the 35-lap Modified feature before heavy rains moved in over the speedway postponing the completion of the race until August 7.

Coming off the momentum of his win earlier in night, Dave Marcuccilli would walk away from the rest of the field winning by almost 3 seconds at the checkers over points leader Ron Davis III.

The first Modified 35-lap feature would see Jeff Sykes grab the lead and would bolt out to a straightaway lead on lap 5. Behind Sykes, you could have thrown a blanket over Mike Stanton Jr., Corey Barker, Lucas Fuller as they battled for second, third and fourth with Todd Root not far behind them.

Sykes would build up big leads twice before quick cautions would erase them. The racing behind him was two and three wide throughout the field.

With 15 laps showing on the scoring tower Sykes was still in control of the race as Marcuccilli, Bob Henry Jr., and Ron Davis III looked for a way to close in on Sykes.

Marcuccilli was the fastest car on the track as he was able to run down Sykes. On lap 18 Marcuccilli found the speed he needed at the top of the speedway driving into the lead.

Once out front nobody seriously challenged Dave Marcuccilli the rest of the race picking up the popular win. Bob Henry Jr., Jeff Sykes, Tim Sears Jr., and Ron Davis III completed the top-five.

The June 19 holdover feature that had 7 laps complete would see Marcuccilli take total command of the race when it went back to green.

With 15 laps complete Marcuccilli had built up a straightaway lead while Marshall Hurd, Todd Root, Ron Davis III, and Larry Wight raced for second through fifth.

Marcuccilli would lead by almost 5 seconds with 10 laps to go. Hurd, Davis, Root and Wight still ran in the top-five.

Over the final laps and no yellows, Dave Marcuccilli cruised to his second win of the night. Points leader Ron Davis III, Marshall Hurd, Todd Root, and Larry Wight finished second through fifth.

The first 25-lap Sportsman feature would see Mike Button lead the opening 2 laps before Wade Chrisman took over the lead.

On lap 10 Chrisman put distance between himself and the three-car battle behind where you could have thrown a blanket over Willy Decker Jr., Button and Richard Murtaugh.

With 10 laps remaining Chrisman still led but would see Murtaugh cut his lead down to a couple car lengths. Button and Matt Janczuk who started 18th were still in the hunt for the win.

A yellow on lap 19 and lap 23 would tighten the field up for a shootout to the finish.
On the final lap Matt Janczuk would get a great run on the bottom of the speedway pulling even with Wade Chrisman and then beating him to the checkers by 0.657. Richard Murtaugh, Willy Decker Jr., and Mike Button finished third through fifth.

The second 25-lap Sportsman feature would see Edward Lukas lead the opening lap before a caution. On the restart Tim Devendorf was quick on the topside of the speedway taking over the top-spot.

With 10 laps showing on the scoring tower saw Devendorf and Lukas run bumper to bumper and side by side in an exciting fight for the lead. Quinn Wallis, Rachel Zacharias, and Mike Phelps weren’t far behind waiting for any mistake by the top-two.

Devendorf was able to put a few cars lengths between himself and Lukas with Quinn Wallis fast gaining on the top-two. Zacharias and Phelps were still in the battle.

Devendorf, Lukas, and Wallis were putting on a show for the fans as they slugged it out for the lead until a yellow on lap 23.

Tim Devendorf got a great restart and that was the difference in the race as he collected his first career feature win at the speedway. Quinn Wallis, Edward Lukas, Mike Phelps, and Rachel Zacharias finished second through fifth.

Bret Belden would grab the lead at the drop of the green and would open an almost straightaway lead on lap 5. Behind Belden Harry Halliday and Chad Homan were in a tight fight for second and third with Kevan Cook and Sean Beardsley showing on the scoring tower.

When the race reached halfway Belden still led with Homan cutting his lead in half, with Halliday, Beardsley and Cook still racing in the top-five.

A caution on lap 11 slowed the pace. When the field went back to green it would take Homan a couple of laps to take the lead and pull away from the field and go under the checkers for his seventh win of the year winning by 3.9 seconds. Harry Halliday, Chris Fleming, Bret Belden, and Sean Beardsley completed the top-five.

Jason Breezee would lead every lap of the 15-lap E&V Energy Novice Sportsman feature. Breezee would have to holdoff a final lap, turn three and four side by side drag race to the checkers over Jason Doty. Mikey Wight, Brianna Murtaugh, and Scott Kline rounded out the top-five.

There will be no racing at the Fulton Speedway this Saturday because McDonald’s® Restaurants presents the Monster Truck Nationals powered by Tracey Road Equipment on Friday & Saturday, August 13-14.

The raw horsepower from the Renegade Monster Truck Tour will shake the grandstands in a high-energy event that is filled with non-stop action for the fans.

Family friendly pricing. Discounted General admission tickets are $20 online now but will increase to $25 on the day of the show. Kids ages 3-12 are just $10 while ages 2 and younger are Free. Visit a participating McDonald’s and get a family four pack coupon (two adults and two Kids) for just $60. Come early and come to the Fun Zone Track party – just $5 per person. Purchase a ride experience on the Renegade Ride Truck for just $15.

Tickets are available now by going to www.fultonspeedway.com. Once there click on the Renegade Monster Truck Tour photo at the top of the page to purchase your tickets.

Racing on the ‘Highbanks’ will return on Saturday August 21st when Ingles Performance will present a night of racing excitement featuring the Modifieds, Sportsman, Late Models, Novice Sportsman plus Mod Lites.

Any questions you might have and for marketing opportunities contact Cory Reed at (315) 593-6531 or cory@fultonspeedway.com. For all the latest speedway news go to www.fultonspeedway.com and like the speedway social media pages.