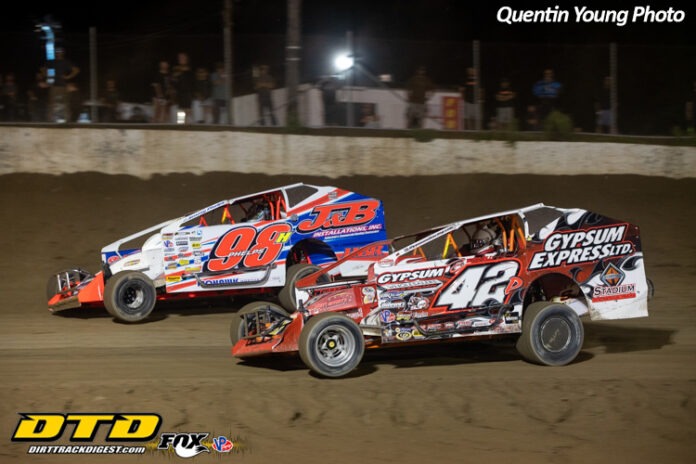 FULTON, NY – It has been said in racing that the most important lap to lead is the last one. That is exactly what Pat Ward did Saturday night at the Fulton Speedway picking up the hugely popular win in the DIRTcar 358 Modified feature.

On the final lap Shields, who was looking for his first ever Fulton victory and Bresnahan were racing hard with the veteran Ward ready to pounce on any mistakes by the top-two.

In turns three and four coming down for the checkers saw Bresnahan and Shields making contact getting both cars out of shape. The contact left Pat Ward just enough room on the bottom to drive by straight into victory lane. Joe Shields, Roy Bresnahan, Jimmy Phelps and Todd Root completed the top-five.

A strong field of Modifieds signed into the pits setting up four heat races and a B-Main to set the 32-car starting feature. Tim Sears Jr. and Ron Davis III got upside down in separate incidents. Both drivers got out of their cars and were okay.

Almost 50 DOT Foods DIRTcar Sportsman were in the pits bringing with it six heat races to set a pair of 25-lap features.

In the first feature Jake Davis would lead the opening 6 laps in a side-by-side battle with Jack Meeks who would take the lead on lap 7 using the topside of the speedway.

Meeks and Davis were in a two-car breakaway at the front and it looked like lapped traffic might play a role in the finish. Just when the two reached the back of the field the yellow would wave on lap 14 giving the cars up front a clear track to the finish.

When the race went back green Amy Holland moved into second and set her sights on Meeks. On lap 18 Holland was able to drive under and by Meeks to be the new leader. One lap later and still running the top would see Meeks retake the lead. Over the final laps Meeks would hold off Brandon Carvey by a narrow 0.234 of a second at the checkers. Amy Holland, Wade Chrisman, and Jake Davis rounded out the top-five.

The second Sportsman feature would see Mike Root lead the opening 4 laps when a yellow would slow the field. On the restart Rick Miller would blast into the lead.

Miller would open a lead as he put some distance between himself and the rest of the top-five when that lead would go away with a yellow on lap 9. The restart would see Alan Fink and Matt Janczuk move into second and third and set their sights on leader Rick Miller.

Fink would use the topside of the speedway to drive into the top-spot on lap 12. Just when it looked like Alan Fink would cruise to the lead by three seconds, the yellow would wave setting up a green, white checkers finish. Fink would outrun Rick Miller to the checkers by 1.209 seconds. Point leader Matt Janczuk, Chris Mackey, and JJ Courcy completed the top-five.

The 15-lap E&V Energy Novice Sportsman feature saw Austin Cooper and Buddy Leathley put on a show at the front of the field in a two-car breakaway. After hounding Cooper, Leathley made the winning pass on lap 6 and then cruised to the win, his second of the year. Austin Cooper, Dwight Nichols, Brianna Murtaugh, and Jason Breezee finished second through fifth.

Kyle Demo would lead the opening 7 laps of the 15-lap AmeriCU Credit Union Mod Lite feature. On lap 8 the winningest driver in the division Justin Williams would take the lead by inches at the flag stand. The rest of the race Williams would hold off Demo and Clayton Brewer for the win. Tucker Halliday and Brad Harris completed the top-five.