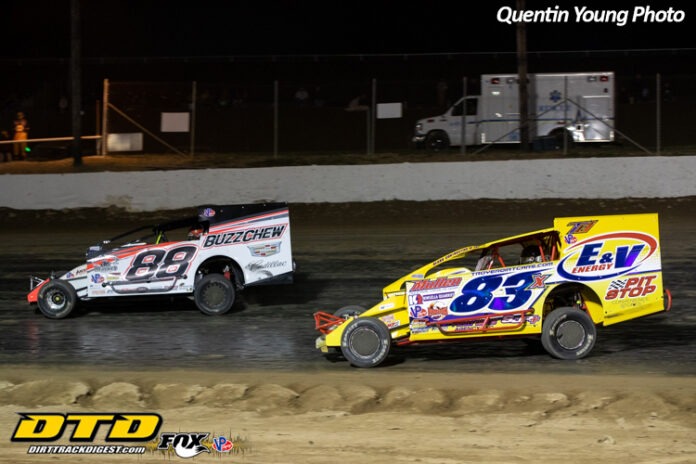 Mat Williamson has added a win in nearly every crown jewel to his resume the last couple of seasons.  One race missing from that resume was the Outlaw 200.

In a season that he’s had his fair share of struggles in extra distance races, Williamson was able to start 34th in the Outlaw 200 before driving to the win.  It took him nearly the entire distance to get the lead from Tim Sears Jr., before he went on to claim the $20,000 top prize.

“We needed this,” stated Williamson.  “We’ve struggled this year.  Now is the time to start clicking because there is money is coming up.”

Alan John redrew the pole for the start of the race and quickly used that to his advantage.  He was able to hold onto the top spot for the opening 19 laps before Tim Fuller was able to get around him on a restart to secure the position.

Fuller’s lead was short-lived as he only led a lap before Sears was able to get a run on him on the backstretch to take the lead.  A caution came right after the lead change as former Outlaw 200 winner Billy Decker slowed with issues.

When action picked up, Sears remained in the lead with the second spot changing hands multiple times among a handful of drivers including Fuller, Mike Maresca and others.

Sears was up to to the task.  As he continued to lead, Jimmy Phelps was racing through the field from his 40th starting spot.  Phelps advanced to the top three for the first time on lap 75.

Caution was necessary at lap 80 when Corey Barker spun in turn four.  On the ensuing restart, Phelps made a move and was able to drive by Sears for the lead.  He remained the leader as the race reached the halfway point.

Phelps kept the lead at the green when racing resumed on lap 101, but he didn’t stay there for long.  Sears tracked him down and went by him as the race reached lap 108.  From there, Sears seemed to be the class of the field.  He extended his lead to nearly a half track.

Larry Wight was now on the charge.  Wight moved into second third on lap 132 and took second on lap 135.  He benefitted from a caution on lap 140 for Joe August Jr., to close the gap on Sears.

Sears and Wight remained the top two over the course of a couple more restarts with Williamson beginning his charge forward as the race reached it’s final quarter.

Williamson was able to get by Wight for second putting him in prime position when the caution was necessary again for a slowing Chad Phelps on lap 174.

The restart is what Williamson needed.  He stayed with Sears and was able to roll the middle of turns three and four to take the lead for the first time on lap 177.

Williamson checked out from the point to pull away to become the first Canadian winner of the Outlaw 200.

“We got ourselves deep in the field early on,” said Williamson.  “We were good the first 100.  I didn’t know what to change.  Luckily we got some good breaks.  We got a good restart there.  I didn’t know if I was going to catch Timmer or not, it was going to be a good race either way.  Hats off to those guys finishing second.”

Sears Jr. held on to finish in the runner-spot after leading a extended portion of the race.  He had a smile on his face, but he was obviously disappointed with the runner-up finish.

“We were really good,” commented Sears.  “Mat was just a little better at the end.  We just kinda sealed the tire over.  We weren’t that good when went back to green.  We were there.”

Sheppard ran a solid third as it looked he had a shot at the win, he just wasn’t as good late in the race as he needed to be.

“We had a pretty good car tonight,” said Sheppard.  “We couldn’t steer at all in the first 100.  We made some adjustments, we were a little better, but just not good enough to be parked over there.”

Wight held on to finish in fourth with early race leader Fuller finishing in the fifth spot.