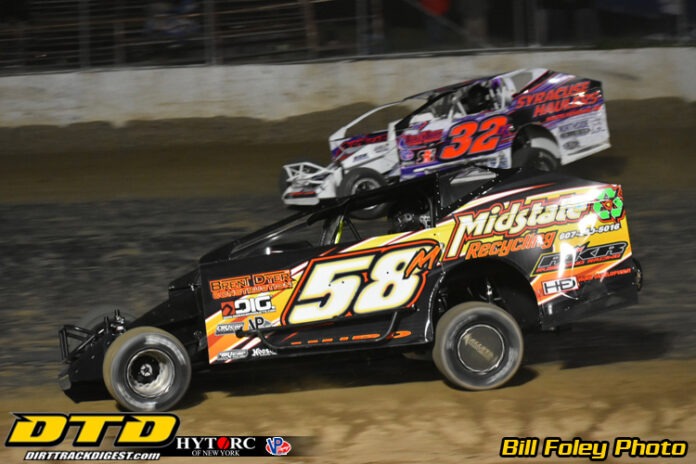 FULTON, NY –   Coming into Saturday night, Marshall Hurd from Endwell, NY sat fourth in the Modified points with good feature runs this season, but one thing evaded him and that was a feature win at the Fulton Speedway.

All of that changed for Hurd as he collected his first career Tracey Road Equipment DIRTcar Modified win. To top it off, he also collected the $600 bounty that was put on Tim Sears Jr. for being the only feature winner at the speedway in 2022.

In the 35-lap Modified feature, Jeff Taylor would jump front his front row starting spot and bolt out to a ten-car length advantage by lap five as Colton Wilson, Marshall Hurd, Ron Davis III, and Justin Crisafulli raced in the top-five.

By lap ten, Taylor still had a comfortable lead as Hurd and Wilson raced side by side with Davis and Crisafulli still in the top-five.

With fifteen laps complete, Hurd reeled in Taylor as they went across the line almost dead even. One lap later, Hurd powered by Taylor and into the lead.

A yellow on lap twenty-one would erase Hurd’s almost two-second lead and would put Davis next to him for the restart, in which Davis would take away the top spo

The race would stay green for one lap when Tim Sears Jr. and Larry Wight made racing contact, with Sears stopping in turns three and four. Sears would refire and continue.

Hurd would battle back, retaking the lead from Davis, exiting turn four on lap twenty-four. Last week’s feature winner Dave Marcuccilli, Wight, and Todd Root who rallied from the back of the pack from an early yellow raced in third through fifth.

Once back in the lead there was no stopping Marshall Hurd as he drove away from the field in convincing fashion, winning by over two seconds over Ron Davis III for his first career Modified victory. Dave Marcuccilli, Larry Wight, and Todd Root finished third through fifth.

With his win, Hurd collected the $600 bounty for being the first to defeat Tim Sears Jr. at the speedway in 2022.

A pair of 25-lap Sportsman features were run Saturday night.

In the first feature Robert Gage would jump into the lead and by lap five was joined by some division heavy hitters with Amy Holland, Kyle Devendorf, Brandon Carvey, and Emmett Waldron racing in the top-five.

On lap ten, with everyone running near the bottom of the speedway, Devendorf went to the topside and drove from third to the lead.

With ten to go, Devendorf was on rails as Amy Holland looked for a way to close the gap with Carvey, Waldron, and Gage still in the top-five.

Over the final laps and no yellows, Kyle Devendorf drove away and into victory lane. Amy Holland, Brandon Carvey, Emmett Waldron, and Robert Gage completed the top-five.

In the second 25-lap feature, Rocky Grosso would lead the opening four laps when Ryan Dolbear, who was running the top of the speedway, would have the lead by inches at the line on lap five.

On lap ten Dolbear would drive out to a half a straightaway lead over Grosso with AJ Miller, Bill Sauve, and Jake Davis still in contention up front before a yellow slowed the action.

With ten laps to go Dolbear was out front in his own zip code leaving Tony Finch II, Grosso, Jake Davis, and Andrew Buff to race for second through fifth.

No yellows slowed the race the rest of the distance as Ryan Dolbear easily was first under the checkers, followed by Tony Finch, Rocky Grosso, Andrew Buff and Jake Davis to complete the top-five.

DOT Foods handed out $200 Visa gift cards to the Sportsman feature winners in addition to their race purse.

Rick Kinney would lead the first two laps of the 20-lap E&V Energy Novice Sportsman feature, when the winner of the previous two features, Skylar Greenfield, would take over the lead on a restart.

Jason Parkhurst Jr. would rundown and pass Greenfield on lap ten and from there would never be seriously challenged, winning by over two seconds at the finish. Skylar Greenfield, RJ Budd, Jesse Morgan, and Brianna Murtaugh completed the top-five.

Russ Marsden won the 25-lap Hobby Stock feature, but the win wasn’t easy, as he had to hold off past feature winner Jim Evans for well over half the race for his first win of the season. Ron Marsden, Casey Cunningham, and Ron Hawker finished third through fifth.

The Fulton Speedway will not be racing this Saturday, June 25 so family and friends can celebrate with their recent school graduates.

Any questions you might have and for marketing opportunities, contact Cory Reed at (315) 593-6531 or cory@fultonspeedway.com . For all the latest news, go to www.fultonspeedway.com powered by My Race Pass and like the speedway social media pages.