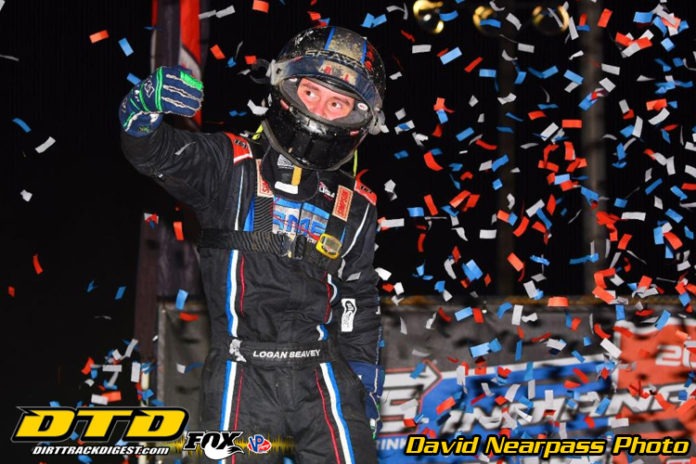 GAS CITY, IN – Friday night’s introduction to the 2020 edition of NOS Energy Drink Indiana Sprint Week at Gas City I-69 Speedway produced one of the wildest finishes in the 33-year history of the series, punctuated by a memorable duel between Logan Seavey and Kevin Thomas Jr. that truly defined the fine line between the thrill of victory and the agony of defeat.

Competing for nearly the entirety of the second half of the 30-lap feature side-by-side for the lead, Seavey and Thomas tangled in turn three while working their past a lapped car, sending both of the frontrunners over the turn three cushion. Thomas’ car came to a stop while Seavey motored on without stopping, bent draglink and all.

Thereon, Seavey finished off the victory in a green-white-checkered battle with Chase Stockon to collect his first career ISW victory and his second in USAC AMSOIL National Sprint Car competition aboard the Reinbold-Underwood Motorsports/AME Electrical – Mesilla Valley Transportation/Spike/Fisher Chevy.

“Happy to finally get a win,” Seavey exhaled. “We finally found the balance and the confidence tonight early, and that’s what I needed. We made a big mid-week decision to stick with what we have. We’ve been struggling all year and we’re debating on getting a new racecar. I talked to the boys and I told them I was confident in the racecar we got right now. I thought we could win with this car and we finally came out and proved it tonight.”


Sutter, California’s Seavey started his race from the pole position, but endured an early onslaught from outside front row starter Chris Windom who slid past Seavey for the spot momentarily in turn three before Seavey cut back under to preserve the lead on the opening lap.

On the third lap, Windom biked hard atop the third turn cushion, very nearly toppling over before landing back on all fours and driving on, although it dropped him from 2nd to 10th in the running order, thus elevating Thomas to the runner-up spot with Seavey showing the way up front. It didn’t take long for Thomas to track down Seavey, however, utilizing the bottom of the quarter-mile’s surface while Seavey worked the middle groove.

A caution on the 13th lap involving 4th running C.J. Leary, 5th place Brady Bacon and the 7th car in the order, Tyler Thomas, at the exit of turn four, took out several prime contenders. Chase Stockon, running 6th at the time, managed to eke through the melee like a Plinko ball, putting some cosmetic damage on the rear end of his car.

The ensuing restart saw an immediate halt to the action with Windom (7th), Robert Ballou (8th) and A.J. Hopkins (12th) all getting ensnared in a turn one kerfuffle. Only Windom out of the bunch returned to competition, finishing 11th.

Once racing resumed, it became a non-stop duel between Seavey and Thomas that, in a four-lap span between laps 19 and 22, saw the pair exchange the lead four times officially at the line. The two alternated big runs on the top (Seavey) and bottom (Thomas) with neither separating themselves by much further than a single car length.

“I saw his nose basically the whole race,” Seavey recalled. “I knew I really needed to get by that first lapped car but anytime I’d get close, I’d make a mistake and let KT back on a run. I felt like we were side-by-side for the whole second half of the race and I knew I just needed to get it going up top. Anytime I felt like I gained a little momentum and got an edge on him, I’d make a mistake.”

Seavey took back the lead on lap 22, and at moments, was able to extend the advantage to three or four car lengths over Thomas. Despite trying the bottom in the earlier stages, Seavey decided to marry himself to the high line and knew that if he didn’t make any mistakes off turn two like he did earlier in the race, he’d be golden, but it was going to take near perfection by one or the other down the stretch to capitalize on any misstep, no matter how slight it might have been.

Seavey led at the stripe on the white flag lap by a half-car length as he and Thomas approached the car of Jadon Rogers in the 19th position at the tail end of the lead lap. Rogers was glued to the bottom just as the rapidly approaching Thomas was behind him.

Exiting turn two, Thomas had one of two decisions to make – either follow Rogers into turn three or try to split to the outside in front of Seavey. Thomas chose the latter, then chaos ensued. The end result saw contact on entry between Thomas’ right rear and Seavey’s left front wheel, sending Thomas careening airborne over the top of the turn three cushion and Seavey spinning toward the guardrail. While Thomas stopped, Seavey miraculously kept his ride off the guardrail and continued on.

“(Thomas) got that big run off the bottom getting in,” Seavey remembered. “He knew he had to slide me, and I knew I had to beat him out of four. He got across the racetrack a lot faster than I thought he would. I was trying to turn down and it was way too late by that point. I have no idea how I drove away from it. I’m not really sure how we didn’t turn over or land in the pits. That’s where I thought I was going.”

Meanwhile, for Thomas, one of his better runs of the year ended in heartbreak as he sought his first series victory of the year.

“We had the lapped car on the bottom and my only shot was to squeeze up to the top getting into three,” Thomas explained. “I got a decent run, but I don’t think good enough. He got a good run too, but I couldn’t really see him going down the back stretch. I tried to give room but tried to slide a little bit too. I just made contact and screwed myself.”

“I knew my draglink was a little bent,” Seavey admitted. “My steering wheel was a little sideways. I know that’s just kind of a comfort thing. I knew everything was going to be fine.”

Everything turned out fine for Seavey, the 2018 USAC NOS Energy Drink National Midget champion, who then had to withstand the challenge of 2015 Gas City ISW winner Chase Stockon. Stockon pulled even with Seavey exiting turn two on the restart and was just a car length behind Seavey at the line on the bottom.

On the final lap, Stockon didn’t quite get the drive he strove for off turn two while Seavey nailed the top to surge ahead and capture the victory by three car lengths – 0.472 sec. – over Stockon, Justin Grant, Kyle Cummins and Thomas Meseraull.

USAC AMSOIL National Sprint Car point leader Justin Grant earned Fatheadz Eyewear Fast Qualifying honors Friday at Gas City, the 25th of his career, which moved him ahead of past series champions Gary Bettenhausen and J.J. Yeley for 16th on the all-time list.