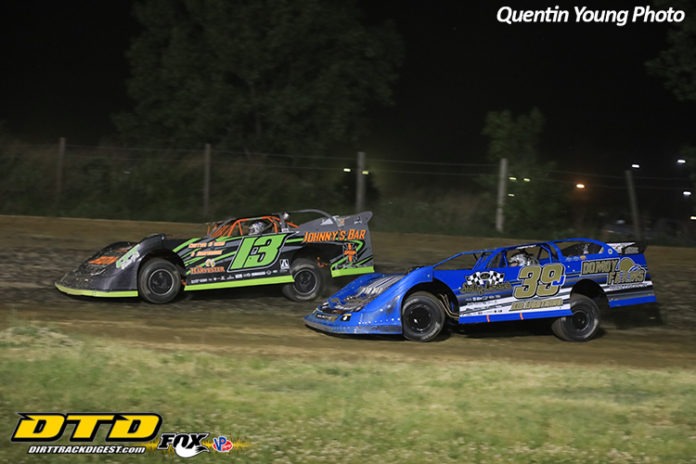 BATAVIA, NY – In what was easily one of the most unique events in history of the Genesee Speedway, some familiar names made their presence known to get their 2020 season started off on the right foot.

Pepsi presented a Five Star Program on Thursday Night at the Genesee Speedway in a show that could hardly be considered “standard”. Despite the grandstands being void of fans, the pits were filled with race cars, 93 to be exact, eager to hit an incredible racing surface that never needed to be touched all night long.

In the Late Models, Jimmy Johnson knew he had a fast race car, he just needed some green flag laps to prove it. Once he got his wish, he flexed his muscle to start the year off right.

Johnson, of Batavia, took the lead away from defending champion JJ Mazur with five laps remaining in the 25-lap RUSH Late Model feature and then drove away to win by over three seconds.

The race started off with 7 cautions in the first 8 laps, during that time “Kid Lightning was steady inside the top five but did not appear at that time to be far superior, the long green flag run changed many opinions.

“I was just waiting for those green flag laps,” stated Johnson in Victory Lane. “This track was great tonight. I could put this car anywhere and once we got going it was just on a rail.”

Johnson started in the 4th position and chased JJ Mazur and Dusty Waters early on. Jeremy Wonderling was also up near the front early on but a spin sent him to the back. On the ensuing restart, Johnson started his charge and moved by Waters and then began to real in Mazur for the lead.

Coming to five laps to go, Johnson put the No. 39J to the outside of the track and sailed in to the lead and never looked back. Mazur crossed in second while David Pangrazio drove up to third. Kyle Murray and Doug Ricotta battled hard to complete the top five.

John Zimmerman put on a clinic in the Street Stock Feature, taking the lead on a lap 2 restart and then checking out to win comfortably in the first feature of the season. Zimmerman, of Burt, was happy to have his car right where he wanted as he went hammer down on a tacky track. Bill Taylor held tough to finish in second while Shawn Hazlett held off Doug Jones for 3rd at the line. Doug Chappius rounded out the top five.

The Mini Stocks held a wild feature with a host of drivers getting their crack up in front of the pack. A great 3-car battle was set to come right down to the wire when a car rolled on the final lap, setting up a one-lap sprint to the finish. On that final lap, Dante Mancuso made a slick move around the outside of Brandon Shepard to steal the win away. Mancuso’s #1 had trouble even restarting after the red flag but once it got fired underway he made the most of it. Shepard would hold for second with Eric Weis in third. Ashley Harbison and Andy Schumaker completed the top five.

Jake Bansmer appeared to have lost his chance at the win the Bandit Feature when he gave up the top spot to Greenley George on a lap 9 restart, but a lap later, George washed up in turn 4 and allowed Bansmer to get back in front and make sure he didn’t relinquish it from there. After winning 3 of the final 4 races to finish last season, Bansmer looked strong throughout to pick up where he left off. After losing the brief lead, George would hold on to second while Tyler Guzzardi completing the podium.

Racing action will look to continue without fans next week at Genesee Speedway on a date to be announced while fans can look forward to their projected return on Saturday, June 27. For more information, visit www.Genesee-Speedway.com.