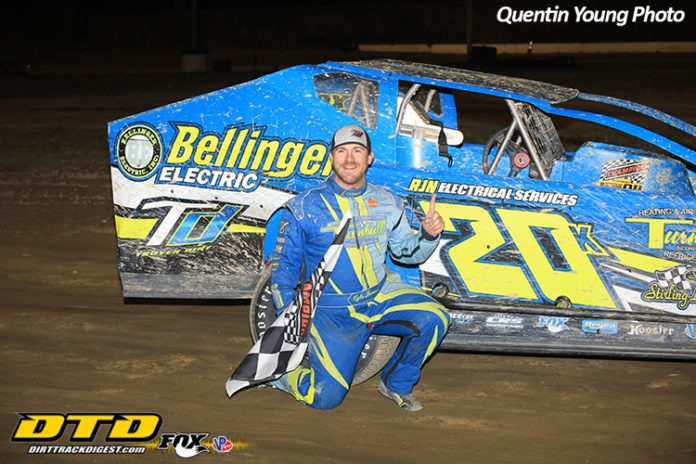 Sarah Johnson and Kyle Inman brought the 19-car field to the green flag with Inman taking over the lead at the end of the opening circuit, with Johnson right behind him. There was action throughout the field, including battles for third place with Ricky Newton and Cameron Tuttle early on. Newton would keep the position until lap 18 as he suffered a flat right rear tire, sending the 11n pitside.

Inman would survive five different restarts to earn his second win of the season at Genesee. Johnson would finish in second, holding off Cameron Tuttle. Dave Conant worked his way back to fourth place after being involved in an early race caution and Phil Vigneri III would complete the top five. Jonathan Reid finished in sixth with Jim Harbison, Noah Walker, Byron Dewitt, and TJ Newton completing the top ten.

“We did a ton of work on the car this week and it paid off tonight,” said winner Kyle Inman. “I’m glad that everything is clicking well early on and hope to continue with the early success in this Troyer Chassis.”

“I will most definitely take a second-place finish tonight”, stated Sarah Johnson. “The car was good and fast all night and it was a way better finish than opening night that’s for sure.”

Over 100 cars signed in pitside for the Friday night special. Promoters Jim & Pam Johnson moved the race up a day, with Friday’s weather being more favorable than the pending Saturday forecast for Batavia and the region.

Other winners on this night included Jimmy Johnson going two for two in the RUSH Late Models, and Josh Pangrazio winning his first of the season in the Street Stocks. It was an emotional win for Rich Conte as he won the Mike Holford/Rich Conte Memorial for the Mini Stocks and second-generation driver Jacob Bansmer won his second Bandit feature of the young season. Look for a full Genesee recap on Dirt Track Digest.