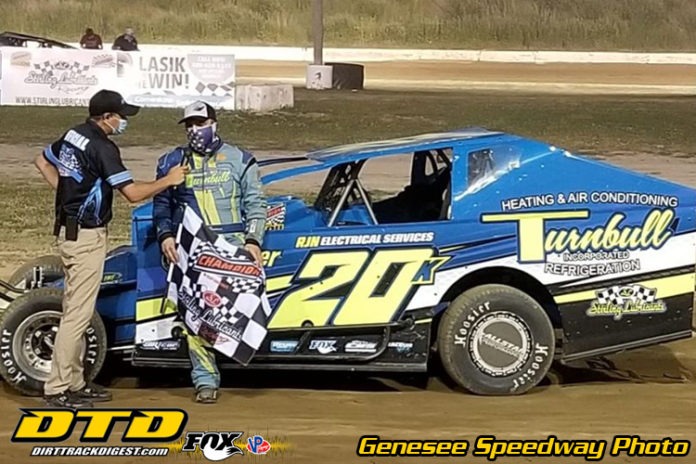 The win was in dedication to former Genesee Speedway racer Brian Ace, who passed away Friday following a courageous battle with cancer.

“We dedicated the win to Brian tonight as he is the brother to one of our longtime supporters Terry Yates”, Inman said in victory lane. Several cautions slowed the field down in their 25-lap feature event. Inman would take the lead from the drop of the green after drawing the pole position. Dave Conant was the first to challenge Inman for the top spot and had his best chance before lap 10, as he looked to the inside in turn two but was unable to get around the Darien, NY pilot.

After Conant pulled into the infield, Cameron Tuttle emerged as the next contender for Inman. “I was worried about Cam coming up because he was fast, but we were able to keep it out front”, Inman said. “Kyle has it figured out how to get around here”, Tuttle said.

Inman would go on to score the win, his third on the new TD5 Troyer Chassis. “The car worked well tonight”, Inman said. “We missed the set up Wednesday at Can-Am for the Central Region Sportsman Super DIRTcar Series race so we stayed in the shop and changed the car and it worked out well” Inman continued.

The action-packed 1/3rd mile oval did not disappoint the crowd that was on hand as it was the first race back with spectators. All racers commented that it was great having the fans back in the stands. “The track was great tonight” Inman said. “The Johnsons did a great job on the track and it was smooth from top to bottom” Inman continued. Inman added that “it looked like the outside was the place to be for the Street Stocks, but the bottom worked well for us tonight.” The victory for Inman took place on the night that sponsors Stirling Lubricants had guests in the VIP Tower and Bellinger Electric added $1,200 to the division’s payout.

Cameron Tuttle would finish second in his #35T. “Once we got a long green-flag run, we were able to make some ground and pass some cars” Tuttle said. “The cautions early on helped us in the beginning, being able to pass cars one at a time but it was a great run tonight for sure” Tuttle added.

Land of Legends regular Garrison Krentz rounded out the podium finishers. “We got lucky in the qualifying heat as we went from last to second and had a good draw and it played out well for us tonight,” Krentz said. “Tonight was supposed to be our last night but we will have to come back when the schedule allows” Krentz added.

Jonathan Reid and Zach George would complete the top five. 17 cars took the green flag out of the 18 that were scheduled. Ransomville Speedway Sportsman champion Brett Senek had issues in qualifying after suffering a broken axel.

Third-generation driver Tyler Vinson scored the win in the Novice Sportsman feature. Like Inman, Vinson led all 15 circuits to score his first win at Genesee. “Car felt great tons of bite on the bottom of the track once you can get there,” Vinson said.

A total of 106 cars signed in pitside as all in attendance had to adhere to the social distancing protocols in place. The fans in the stands were rewarded with a firework display as the speedway celebrated Independence Day.

Other winners on this night included “Mr. Excitement” Jeremy Wonderling picking up the win in the RUSH Late Models, and Josh Pangrazio winning his second of the season in the Street Stocks. Brandon Shepard won his first Mini Stock feature of the season, while second-generation driver Jacob Bansmer won his third straight Bandits feature of the young season. Look for a full Genesee recap on Dirt Track Digest.