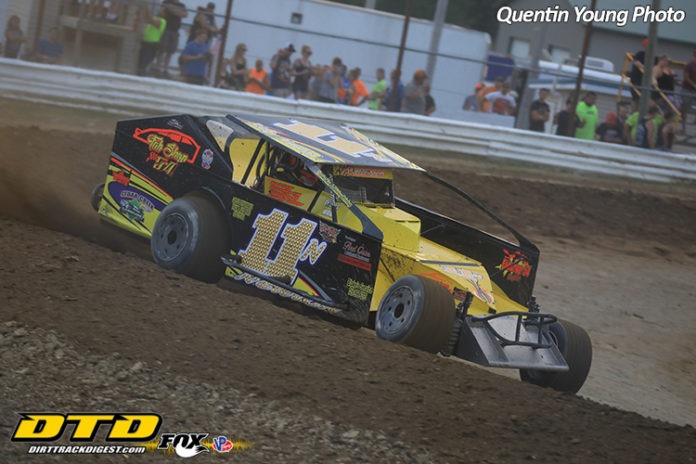 BATAVIA, NY – Third-generation driver Ricky Newton broke the three-race win streak by Kyle Inman Thursday Night at Genesee Speedway. The Oakfield, N.Y., pilot took the lead from the drop of the green flag to lead all 30-laps in the GRIT Racing Series opener.

Newton shared the front row with Jim Harbison and would take off into the lead. Kyle Inman started 16th on the grid after having a mechanical issue during his qualifying heat and steadily worked his way through the field. Newton, Jonathan Reid, and Dave Conant pulled away from the field and thought they had settle the race amongst themselves.

After the races’ lone caution on lap 18, Cameron Tuttle entered the top three, and Kyle Inman would race inside the top six. Newton, Reid, and Conant pulled away with Newton scoring the win.

“The win certainly feels good,” Newton said. “With the year that we have had, it is good to finally get one. “I cannot thank my family, sponsors, and crew enough for their support.”

The win for Newton in the Genesee County Clash came with a $1,000 payday and a guaranteed starting spot in the GRIT Winter Nationals at North Florida Speedway in Lake City, Florida in February 2021.

“Mr. Excitement” Jeremy Wonderling won his second race in five days at the Batavia, N.Y., oval in the RUSH Late Models. After an early race altercation, the Scio, N.Y., driver worked the outside of the track to take the lead away from Doug Ricotta and went on to score the win. Wonderling would hold off Ricotta, JJ Mazur, Austin Hauser, and Brian Kotarski. Career-best finishes were had by Austin Hauser (4th) and Austyn Fugle (6th).

“We were able to maneuver our way out of trouble and the kept the car clean and in one piece this week”, Fugle said. “That’s a win in itself sometimes, especially how our season has started”, Fugle continued.

Race winner Jeremy Wonderling commended track promoters Jim and Pam Johnson, along with the track prep crew for preparing a fast and smooth racing surface, despite the humid conditions and lack of rain to help with moisture in the track. Several drivers across all of Genesee’s divisions said the same sentiments.

Other winners at Genesee include Josh Pangrazio winning in the Street Stocks for the second time in five days. The first three rows of the Street Stock feature were filled with several track champions, including former Pro Stock track champion Dan Schulz, who would take the lead from the drop of the green flag. Reigning track champ Josh Pangrazio took the lead on lap three and would not look back. John Zimmerman, Dennis Cummings, Schulz, and Jesse Qutermous would complete the top five finishers. Cole Susice scored the Mini Stock win over Brad Shepard and James Gayton. Brian Gregory leads all 12 circuits to score his first Bandits win of the season, ending the three-race win streak by Jake Bansmer. Brian Monahan Jr held off Dylan Duhow to score the Novice Sportsman feature.

ogram starting at 7 pm for the fans in the grandstands and those watching at home on DirtTrackDigest.tv, the Bandits and Novice Sportsman had a feature-only format. The show was moved at a steady pace as lightning and rain could be seen all around the property and was falling nearby, but no precipitation fell at the racetrack.