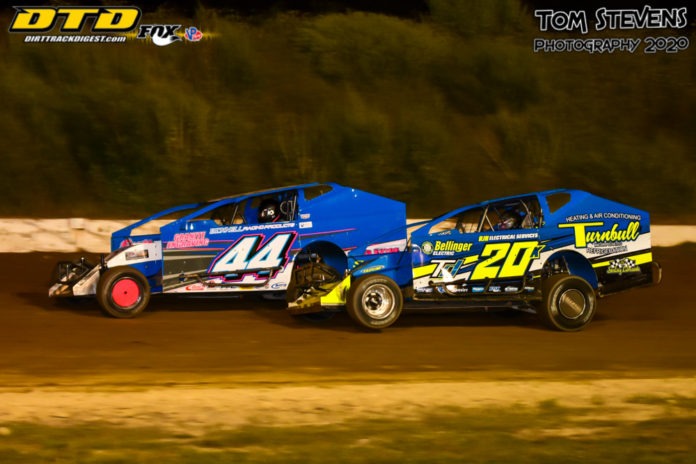 Dave Conant and Zack George brought the DIRTcar Sportsman to the green flag for their 25-lap feature event with Conant showing the way over George, Jim Harbison, Cameron Tuttle, and James Henry. George would continue to put pressure on Conant for the lead but was unsuccessful early on. Garrison Krentz would enter the top five after passing Henry on lap seven, as Henry was trying to hold off challenges from Sarah Johnson and Kyle Inman. Krentz would continue to head towards the front as he went around Harbison for fourth at the races’ halfway mark. Conant would start to pull away, but a lap car would bunch the top three up as Tuttle, George, and Conant went three-wide for the lead with ten laps remaining, with Conant keeping the lead. Garrison Krentz would reel in the top three, setting up a great finish. After a lap 20 caution, Krentz would get docked back two spots for rough riding by the track officials. Just one lap later, the two would make contact again on the front stretch with Harbison climbing the front straightaway wall. Harbison climbed out of his car under his own power. Krentz would be done for the night after the altercation on track. The restart would see Conant lead Tuttle and Kyle Inman. Inman would look underneath Tuttle for second and would complete the pass with three laps remaining. Inman would again use the bottom of the track to challenge Conant for the lead. Inman would complete the pass coming to the white flag and would go on to score the win over Conant, Tuttle, George, and Sarah Johnson.

“I didn’t think about going to the bottom when we went back green but when Dave slipped in front of Cam, I was able to get next to Cam and it rolled pretty good and we were able to get around Dave for the lead and the win”, commented Inman. “We drove from eighth and everyone has been working really hard on it between everyone in the shop and Billy up at Troyer”, Inman added. The driver from Darien had a top three run Thursday night at Land of Legends Raceway in Canandaigua.

“We had a good car all night and Kyle got me on the last lap”, said runner up finisher Dave Conant. The driver from Niagara Falls has continued his strong runs with another podium finish.

Third place finisher Cam Tuttle knew he had a fast car all night. “I know that we have a fast piece but can still be better”, Tuttle said. “We had a heck of a battle with the top two and then the red came out and sealed over our right rear tire. That’s racing though, but I cannot thank my parents, and all my sponsors enough for their support.” DIRTcar Sportsman Qualifying heats were won by Jim Harbison, Dave Conant, and James Henry.

Tyler Vinson pulled away from Dylan Duhow and Orval Harris to score his second Novice Sportsman victory of the season. Nine Novice Sportsman took part including “The Huxster” Cory Sawyer. Sawyer, a past Street Stock champion at Ransomville has never raced a sportsman car until Saturday night. “I only drove once in hot laps in 1990 so it ought to be interesting”, Sawyer said. “I was nervous but got more comfortable as I got more seat time”, Sawyer added. The driver from South Central Niagara Falls, NY finished fourth in his debut, driving for AJ Custodi. Tim Nies won the qualifying heat.

Jimmy Johnson returned to form on Saturday night, as he cruised to the win in the RUSH Late Models. Johnson would beat JJ Mazur, Dave DuBois, Brian Kotarski, and Paul Grigsby. Johnson started sixth on the grid and would take the lead early and would go on to score the win. “The car worked really well everywhere” said race winner Jimmy Johnson. “The bottom was really tacky, especially after the rain and once we got up front, we just set it in and took it easy”, Johnson added. Johnson did publicly apologize for the incident last week that took out Paul Grigsby. “I didn’t mean for it to happen as we were both going for the win”, Johnson said. For Johnson, it was his fourth win of the season at the Batavia oval. RUSH Late Models Qualifying heats were won by Jimmy Johnson and last week’s winner Austin Hauser.

Other winners at Genesee included Tommy Kemp in the Street Stocks. For Kemp, it was his first win of the season. Adam Depuy, John Zimmerman, Bill Taylor and Jesse Qutermous completed the top five. Adam Depuy and Brandon Sherwood won the qualifying heat races. Defending co-champion Cole Susice picked up the win in the Mini Stocks. Cody Wise won his second straight qualifying heat while Bailey Logsdon won her first career divisional heat race. Jake Bansmer held off Brian Gregory to score his sixth victory of the season in the Bandits. Bansmer was also victorious in the qualifying heat event.

92 cars signed in the pits for the racing action at Genesee. The track had a brief shower during street stock qualifying, but the track came back into racing shape in about a half hour during Street Stock qualifying.