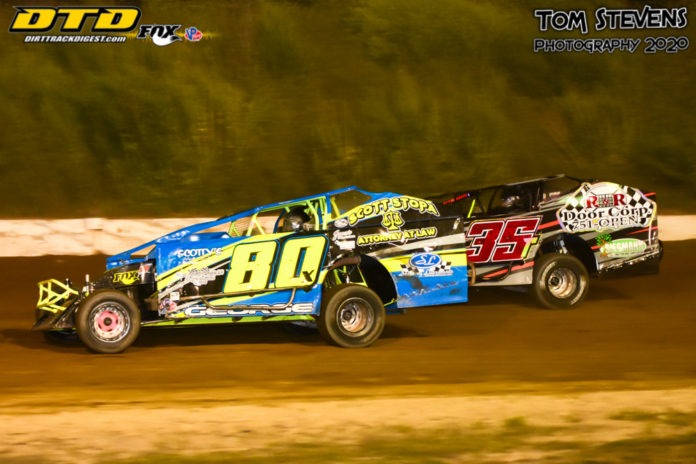 BATAVIA, NY – Zach George was able to get the lead away from Dave Conant following an early race restart and would then hold off the charges of Kyle Inman and Cam Tuttle to score his second Sportsman feature of the season Saturday night at the Genesee Speedway.

“I was hoping that Dave wasn’t going to choose the top on the restart”, said race winner Zach George. The outside of the 1/3rd mile oval was the successful line for George as he worked the top side of the speedway to his liking all race long as he was able to hold off Kyle Inman to score the win. Once George got up front, he also used lap traffic to his advantage as he was able to put some distance between himself and the field. “The car was fast, and I can’t thank my dad and my crew for their support”, George added. George scored his second of the year over Inman, Cameron Tuttle, Dave Conant, and Sarah Johnson.

“It was a good points night” commented runner-up finisher Kyle Inman. “It was also a good points night towards the Hoosier Tire Weekly Championships as well”, Inman added. “The car was better on the top than the bottom. When Zach got by the lap car, I was going to follow him on the top and then the lap car came up and ran the top so I had to change and go to the inside and once I cleared the lap traffic, it was too late”, Inman said.

While racing at the Outlaw Speedway on Friday nights, Zach George drives for Scott and Donelle Wolfe and the Wolfpack Racing team. With Scott Wolfe behind the wheel of the 80x, Wolfe would collect the checkered flag in the Novice Sportsman feature. “We have a lot of people working on this car” Scott said in victory lane. “Erick Rudolph takes care of our shocks and cannot thank him and Charlie Rudolph for all of their support. I also can’t thank Scott George and his family for all they do for the race team” Scott added.

Going into Saturday night’s RUSH Late Model feature, Springville’s Paul Grigsby has had a season he would rather forget. There were weeks that he was upfront and in contention for a win but was unable to get it to victory lane. But on this night, Grigsby’s hard work paid off as he crossed the finish line first. “We’ve had absolutely terrible luck here at Genesee, going all the way back to the BRP CanAm Series days” commented RUSH Late Model feature winner Paul Grigsby. Grigsby had an upfront starting spot and had a fast racecar all night long. “Tonight, it just finally came together, and it worked out for us”, Grigsby said. “I cannot thank all my family for their support”, Grigsby added. Grigsby raced on to the win over Beamer Guzzardi, Dusty Waters, Jimmy Johnson, and Jeremy Wonderling.

Pat Powers scored his first victory at Genesee in over three years after being victorious in the Street Stock feature over Bill Taylor and Brandon Sherwood. Brandon Shepard scored another win in the Mini Stocks and Jake Bansmer was in “seventh heaven” after scoring his seventh Bandits win of the season.

News and Notes: 98 cars signed in the pits for the racing action at Genesee. Next Saturday will be the points finale for all classes. A couple of 358 Modifieds took part in a hot lop session at the end of the night, Dick Park in his 3D and Nick Joy in his 12j. Matt Steffenhagen took out his DIRTcar Sportsman for the hot lap session as well. “I just had to get comfortable again and the car ran really well”, Steffenhagen said.

Former Wyoming County International Speedway Super Stock track champion Cassie Logsdon made her debut on the dirt, driving the Mike Logsdon Racing #34 Street Stock. “I always wanted to try racing on dirt and tonight, I got the chance and opportunity to drive”, Cassie said. Logsdon finished 10th in her dirt debut. Currently, Logsdon drives an asphalt Sportsman Modified at area speedways and on the Race of Champions.

Jesse Qutermous was behind the wheel of the Randy Gregory #27 after having mechanical issues in his #2Q Street Stock. Qutermous finished fifth in the feature while divisional points leader Bill Taylor finished second.

Making her Novice Sportsman debut was a fourth-generation racer, Jordan Jermyn. Jordan is the niece of former Genesee track champion Stubby Pangrazio. Jordan made her debut after moving up from the micro sprint program at nearby Limerock Speedway in Caledonia.

Genesee will be releasing race dates for September following next week’s racing program.