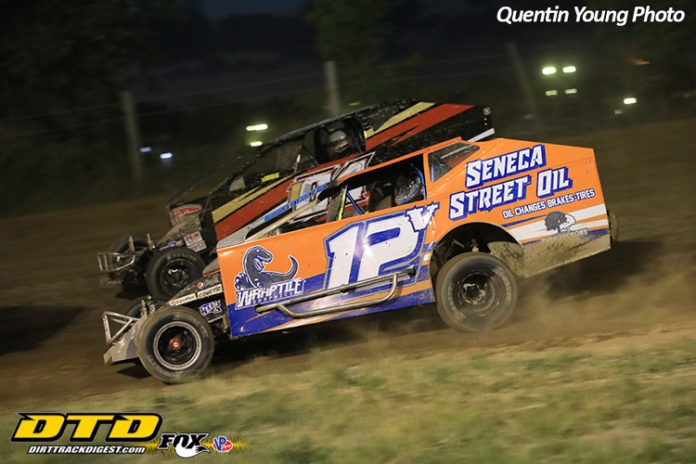 BATAVIA, NY – After having a couple of weeks off to regroup and reload, the Genesee Speedway returned to racing on Saturday night with the RUSH Pro Mods making their inaugural visit to the 1/3rd mile.

Most of the competitors of the RUSH Pro Mods came from the Southern Tier of New York, Pennsylvania, and Ohio to compete at Genesee. There was one driver in the field that had the shortest trip to get to the Genesee County Fairgrounds, Justin Chaddock. The Batavia native had the shortest drive and was one of the few drivers in the field that had track experience at Genesee. Steve Dixon and Adam Ashcroft were on the front row for their 20-lap feature event. Several cautions slowed the feature down. “The Keystone State Warrior” Dennis Lunger Jr made the near five-hour tow from the PA/Ohio border to compete and took over second place early on and went after race leader Steve Dixon. Lunger looked to the inside of Dixon going into turn three with five laps remaining, but Dixon was able to hold him off. Dixon would hold off Lunger and Adam Ashcroft to score the win. “It was my first win at Genesee, and it feels pretty good” stated Dixon in victory lane. “I’ve run here several times with the old BRP Series and with the Crate Lates and I ran well but never got a win here until tonight”, Dixon continued. The Smethport, Pennsylvania pilot led all 20 laps to score the win. Joel Smith and Close Racing Supply stepped up and covered the pit entry fees for the drivers of the Pro Mod division.

Running his first race at Genesee in nearly five years, five-time 360 Late Model Super Stock champion Jim Johnson dominated the 25-lap feature event, leading from green-to-checkered scoring the victory. “I joked with the whole family about being able to do this” Johnson said. “I’ve been here since I was 19 years old between racing and promoting here. Being able to put together 25-laps, like I did tonight, was pretty special”. Johnson raced his son’s Crate Late Model as Jimmy had surgery during the couple week break. Another special moment took place just a few short weeks ago when son Jimmy won the track championship. “It definitely was a special moment for the family and having a proud dad moment being able to hug Jimmy on the front stretch.” “Being one of the few father-son combinations to win a track title at Genesee is special all in itself”, Johnson added. “I cannot thank Jimmy enough for dialing the car in and for letting me drive it”, Johnson said. “Jimmy is 100% committed to that racecar and asking everyone for the advice and setting it up”. Johnson and Austin Hauser led the RUSH Crate Late Models to the green flag for their 25-lap event with Johnson showing the way over Doug Ricotta, Hauser, Greg Mrzywka, and Bill Holmes. Johnson would check out on the field as he quickly opened his lead to nearly two seconds over Ricotta. Mrzywka would ride the backstretch wall, coming to a stop in turn three.  Johnson would pull away after several restarts to score the win. Ricotta, Kyle Murray, Bill Holmes and Paul Grigsby completed the top five. Greg Mrzywka won the opening heat race over Doug Ricotta and Jim Johnson. Austin Hauser won the second heat race over veteran Bill Holmes.

With 22 DIRTcar Sportsman in the pits, “PV3” Phil Vigneri took the lead off the start of the 25-lap DIRTcar Sportsman feature over fellow qualifying heat race winner Tom Richau and Ricky Newton early on. Noah Walker was on the move. The North Tonawanda pilot worked his way to second and would go after race leader Vigneri. Tom Richau’s strong run came to an end on lap 15 as he got turned exiting turn two after contact with Dylan Duhow. The caution would wave on lap 16 with Jonathan Reid spinning in turn four. The race ended with that caution flag due to time constraints. Vigneri would get the win over Noah Walker, Cam Tuttle, Dave Conant, and AJ Custodi. “The Underdog” Austin Susice purchased Sarah Johnson’s 94j and drove to a heat win over Dave Conant. Tom Richau secured his first Genesee heat race victory as he pulled away from AJ Custodi and Ricky Newton. Phil Vigneri III pulled away from 2020 divisional champion Cam Tuttle to score the heat win driving the Smith Racing 12v.

“It’s been four years since I’ve won here, and I got to start upfront, so that’s a lot nicer” stated Vigneri. “The car was a little tight I thought so I threw the car where it slicked off and I was able to keep my momentum up”, Vigneri added. “It’s nice racing close to home, I can be in bed in about an hour after unloading the car and it’s nice that we can load it in the trailer the same way it came out of the trailer this afternoon”, Vigneri said. “It would have been a good race with Noah but with the call that the next flag ended the race, I told myself to just hit my marks”.

“It feels good being back and running in second was amazing and makes it all worth it in the end”, stated runner-up finisher Noah Walker. Walker was involved in a serious wreck a few weeks ago, setting the team back a few weeks. “I cannot thank my dad and family enough along with my sponsors, Military Road Save A Lot, Halleen’s Automotive, JW Services, Champion Racing Oil, Mackenzie’s Automotive, and Greater Niagara Mechanical”, Walker said. When asked about what is next for the Walker 22 team, Noah commented, “we are taking things week by week and seeing how it goes.” Walker is not ruling out running DIRTcar Racing’s OktoberFAST presented by DIRTVision.  Michael McCarthy getting the win in the Novice Sportsman.

Brad Shepard won an exciting Mini Stock feature over Brad Whiteside and Rich Conte in the 15-lap feature. It was Shepard’s first win at Genesee since July 27, 2019. The Mini Stock division saw the return of “The Irish Twins”, Randy and Brian Gregory. Midway through the season, the Gregory boys became the latest members of the “Wise Guy” Racing Team, sporting the purple and yellow on their racecars. Saturday night at Genesee, Randy ran the 727 with Brian in the 227. “The Irish Twins” had Adam Chaddock be behind the wheel of Randy’s Street Stock. Brian’s old Bandit car was driven by “Wise Guy” member Jeremy Surowy.

Prior to the start of the action, the speedway held a moment of silence for the grandfather of track videographer Mike Piccirilli. Piccirilli said “a special thank you to everyone for making this night special to my family and I”. “Along with all the support from the drivers putting stickers on their cars in remembrance of Grandpa, the entire night was special”