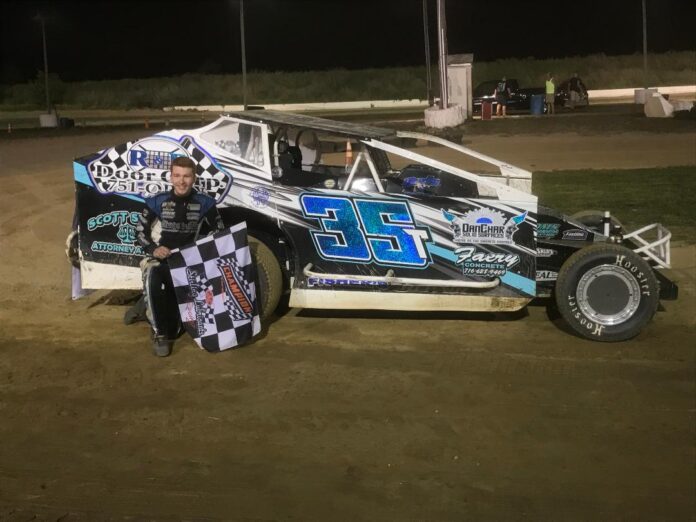 BATAVIA, NY – A perfect night for racing saw six different feature winners, all of whom had already secured a win at Genesee Speedway in 2021.

Bill Holmes ran to his third win of the season in the Late Models. Holmes, of East Concord, started in third, but quickly took the lead on lap two from Paul Grigsby and held a steady advantage over the field. With eight laps left to go though, JJ Mazur ran the No. 8 right down and made a bid to the inside for the lead off of turn four. Mazur was unsuccessful in that attempt, and it proved costly as it gave Holmes the info he needed to hang on to the lead.

“I was just kind of cruising up near the top until I saw JJ put his nose underneath me in turn four,” noted Holmes in Victory Lane. “I figured I had to run the bottom.”

Once moving down to the inside line though, Holmes was not fully convinced he was in the right line as Mazur, along with Jeremy Wonderling, were chasing him down.

“It was a good line but I was worried because it was so slow down there,” he added. “JJ always runs us clean though and I appreciate that he did that here.”

The race started off with Paul Grigsby and Jimmy Johnson tangling on the front row. Grigsby would hold the lead for a lap before Holmes took over. Once Mazur took over second on lap 9 he was able to run the leader, but also fend off Jeremy Wonderling who had moved in to third on lap 13. Those three cars would battle to the end, with Mazur settling for the runner-up spot just ahead of the No. 3J. Grigsby would cross in fourth with Doug Ricotta completing the top five.

Cameron Tuttle was licking his chops when moisture was laid down on the top groove just before the Sportsman Feature and the outside polesitter used the rim to ride to his second win of the year. Tuttle, of Wilson, led all 25-laps while point leader Phil Vigneri III gave him everything he could handle.

“The car was amazing at the start, but then about 10 laps in my brake pedal went to the floor,” Tuttle revealed after the 25-lap event. “I saw Phil (on the leaderboard) in second and figured he likes to run to the bottom but we stuck to the plan on the top and it worked out.”

In the mid-section of the race, Vigneri was working on a pass for the lead when the caution flag flew before the lap could be completed. Tuttle used that restart to get his No. 35T back out in front and pull away down the stretch for a gratifying victory.

“We have had a lot of problems we have had to work through and put in some serious hours in the shop,” said Tuttle. “We had to change the transmission again today for the sixth time.”

As Tuttle held off Vigneri for the win, a fierce battle for third was up for grabs down the stretch with Noah Walker rallying from a spin on lap four to run back up to a podium finish. Walker, the winner a week ago, moved by Dave Conant in the final three laps for the position. Brandon Michaud put a solid run together to round out the top five.

Bill Taylor won his third Street Stock Feature of the season, but it was far from easy. Taylor, of Arcade, took the lead from Shawn Hazlett on lap six but on a restart two laps later his No. 1 shut off exiting turn two and stacked up the pack, but his car fired back up and allowed him to hold on to the lead. With four laps remaining though, Tommy Kemp made a move underneath Taylor for the lead at the line to complete lap 17. Taylor was persistant though, staying true to the top line and using his momentum to run back in to the lead. Kemp made a late bid on the bottom lane but had nothing for Taylor. It was an extremely gratifying win for Taylor as he had to fix many broken parts of his car this week after performing maintenance. Kemp would settle for second a week after scoring the win while Brandon Sherwood placed in third. John Zimmerman and Dan Schulz rounded out the top five.

The Mini Stock Feature saw five lead changes with a tight pack of competitors, with the final exchange for the top spot coming on lap 13 when Dante Mancuso drove underneath Cole Susice for the lead and then scooted away for his fourth win of the season. Mancuso, of Batavia, was in third on a lap 12 restart but when a few cars bounced off one another he drove up to second around Andy Schumaker to go after the leader. Susice would hold off Schumaker for second while Eric Weis ran to fourth as a substitute driver, just ahead of point leader Brad Whiteside.

Tyler Guzzardi captured his second Novice Sportsman Feature win of the year, leading wire-to-wire in the 15-lap event. Guzzardi utilized the top line throughout while holding off point leader Jake Bansmer, who kept peaking his nose down on the bottom line. In the closing laps, Guzzardi began to strengthen his distance over the No. 71 to win by 4 car lengths. Andrew Joy ran a solid third place to the finish.

The Bandit Feature saw normalcy flip upside down on the opening lap as point leader Alexis Traxler broke and opened up the door for Chad Johnson to take command and never look back. Johnson, of Castile, dominated throughout the 10-lap event to score his second win in just his fifth career start. Cole Harding finished second in his first event while Morgan Coniber completed the podium.

Racing action returns rapidly with the next event this Thursday, June 17th for a special 7:00 p.m. start time. NAPA Auto Parts and Liquitube will present a “Light up the Night for Kenzie” Memorial race. For more information, visit Genesee Speedway